Home Natural Gas Could this be the first bullish chart for natural gas?

Could this be the week that natural gas bulls have been waiting for? The week when net injections into storage are so much below last year’s or the five year average – that they believe the coming production-falls- off-a-cliff scenario has started, and be the sign that natural gas prices will rise?

And would that give natural gas stocks a run up?

I ask because when looking at a chart (from Peters & Co., a Calgary brokerage firm specializing in oil and gas) of the last five years injection statistics, I see a big anomaly.  In 2008, net injections of natural gas in the US spiked over these same coming three weeks.  Here is the chart: 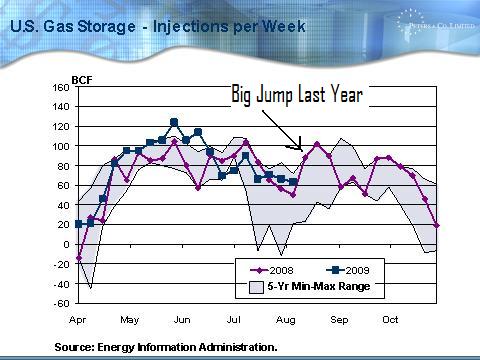 Will the market interpret a 50 or 60 bcf injection – much lower than those high numbers from last year – as a sign the long awaited natural gas market has arrived?

It should be easier for the next 3 weeks of net injections to get well under last year’s numbers.  That would make this time a good test of the bulls’ theory that a declining rig count in both the US and Canada will mean sharply reduced production, storage levels reverting back to the norm in autumn, and higher natural gas prices.

We can place Sanford C. Bernstein & Co. energy analyst Benjamin Dell in that camp.  In a July 30 report, he estimates natural gas production declines will start happening now – in the summer of 2009.  He presents his math which suggests that December production will fall 10% from 2008-2009, going from 63 bcf/d to 57 bcf/d.

Dell and his team also shows overall decline rates increasing from 15% in 1992 to 25% in 2000 and 29% in 2008, and this higher decline rate will help lower production.  First year production declines were much sharper – 62% for horizontals, and 45% for non-horizontals.

It’s much the same argument that Canadian energy specialists Tristone Capital have been making (see my story on that here: http://oilandgas-investments.com/natural-gas/overweight-natural-gas-stocks-tristone-capital/).

And of course they are right.  Production is already decreasing, and natural gas prices and stocks will go higher sometime – but it’s the timing that has investors confused.  Will investments in natural gas stocks be dead money for a long time or are these stocks on the cusp of a major recovery?  If you watch the stock chart on UNG-NYSE, the natural gas fund in the US, you will see investors have already had a couple expensive false starts this year.

And while production is declining, there has been no demand increase for natural gas so far this year.  So net injection levels into storage each week – reported every Thursday by US Energy Information Agency – are still high.

But the chart is telling us this week the bulls could have a chance.

How important would that be for investors?  Most Canadian gas stocks have almost no positive cash flow right now, have used up 70% or more of their debt capacity, and yet have stock prices that are already pricing in $5-$6 gas.  I could smugly say that I am willing to miss the first 10% move and wait for a trend to develop, but from the UNG action I see that many, many investors are willing to jump in hard and fast into beaten down natural gas stocks with any good news.  I think a lot of stocks will have big moves in 1 or 2 days if and when a positive injection (i.e. low) number comes in, but the real question is – is that that time to be a buyer, or a seller?

The natural gas bears still have many items on their side of the ledger.  Major gas producers such as Chesapeake (CHK-NYSE) are actually increasing production quarter over quarter, and year over year, and are not curtailing any production right now.   Canada’s Encana has hedged a lot of gas for 2010 at $6/mcf – not a strong vote of confidence in next year’s pricing.

Canadian producers are also faced with a strong Canadian dollar, making their product more expensive in the United States, and not just one but several new natural gas pipelines in the US that can displace Canadian gas by taking cheap gas from the Rocky Mountains to the eastern states and California.

And while Liquid Natural Gas (LNG) has not proven to have an impact on US pricing this year, the 1.8 bcf/d (billion cubic feet per day) that came in April this year had an average price of $4.20/mcf.  The three largest LNG suppliers to the US that month – Egypt, Nigeria and Norway – all sold their gas under $4/mcf.[1]

James Williams, publisher of The Energy Economist Newsletter, says the US can import and send into the pipeline system a total of 8.9 bcf/d of natural gas, and suggests it will be difficult to see natural gas prices over $4/mcf until that infrastructure is close to capacity. (Again, current usage is 1.8 bcf/d).

Let’s see what happens this Thursday.

[1] From James Williams, WTRG Economics, www.wtrg.com – his presentation and simplification of EIA data is GREAT information and is only US$75 per year.