Or did investors come to believe that the natural gas price is a runaway train on a dead end track?

Despite a natural gas injection this week (52 bcf) that was smaller than forecast, and quite a bit less last year’s 88 bcf injection (and less than 5 year average injection of 64 bcf), natural gas prices tumbled.

Investors focused on natural gas inventories inching closer to being full. The  fear of natural gas companies having to shut in production en masse, in the near term, took over sentiment.

While the natural gas price tumbled, natural gas stocks, however, did not. The Amex Natural Gas Index was up almost 1%.  That has me intrigued.

Negativity hit a new high today on natural gas.  Look at the volume on the ETFs in the US and Canada.  UNG-NYSE traded had its biggest volume day in two months and set a new low.  Investors were clearly voting with their feet and walking.  In Canada, the Betapro Horizons 2x leveraged natural gas long ETF, symbol HNU:TSX,  had record volume and dropped 10% to dip under $3/share.

These are good indications of capitulation, which is “a volume surge after an extended decline reflects a selling climax or capitulation that exhausts selling pressure”, according to www.stockcharts.com. 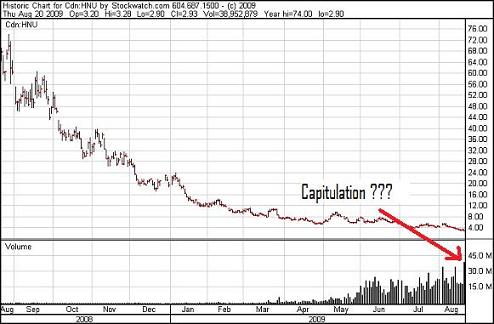 But of course, it could get worse.  Calgary-based, First Energy Capital Corp. Analyst Martin King, was quoted in a Reuters story today saying “This is the precursor to a bit more of a pullback down into the $2.25 to $2.50 range. Producers have to carve back supply, otherwise it’s going to run into a big wall come late September.”

For me, this is the beginning of opportunity.  The next 6-10 weeks should bring some of the natural gas stocks I have been tracking into buying range.

Subscribers will be kept updated on any new portfolio purchases.  The most recent purchase has a natural gas play that one analyst showed as having one of the best economics of any play I have ever seen.  I bought shares in the company for its new oil discovery and debt free balance sheet, but once the natural gas price moves up, it will be one of the most highly levered companies – as a low cost producer.