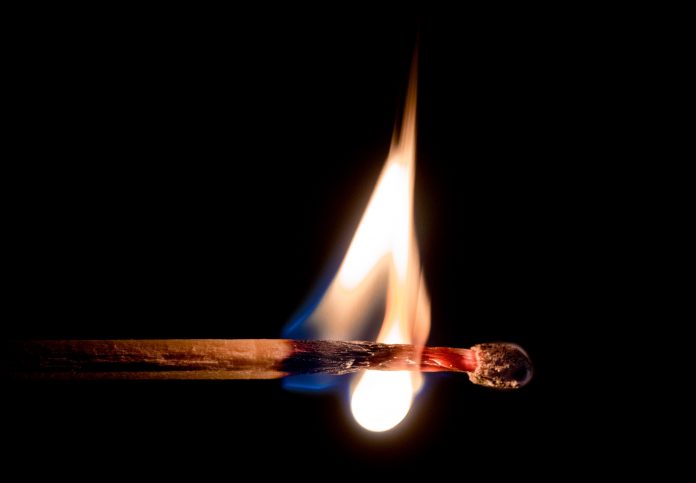 You may not recognize the term, but there have been several high profile ENERGY-related SPACs. Very few have worked out.

Maybe the most successful oil company SPAC was Mark Papa’s Centennial Resource Development (CDEX – NYSE).  In 2016 CDEV raised $500 million.  While things recently went south (its now trades at under a buck), the stock did trade as high as $20 in mid-2018.

One of the biggest flops in the SPAC world also came from the E&P world.  Alta Mesa Corp (symbol was AMR-NYSE before bankruptcy) was a shale producer and midstream operator focused on the STACK formation in Oklahoma.  But the stock fell flat on its face eventually filing for bankruptcy last year.
Alta Mesa has the added infamy of also being the largest SPAC by IPO proceeds – over $1 billion raised.

Now we’re seeing SPACs in renewable energy.  Take VectoIQ Acquisition Corp (VTIQ – NASDAQ).  The stock price of this SPAC has risen by over 150% since the beginning of March. 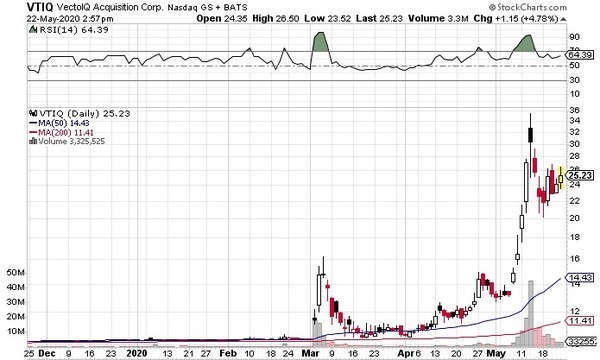 Investors piled into VectoIQ after they announced that they would merge with Nikola (as in Nikola Tesla), a private Arizona start-up developing a fleet of electric/hydrogen fuel cell vehicles – semi-trucks, pickups and power sport vehicles.

At the close of the transaction the surviving company, which will be called Nikola, will trade publicly on NASDAQ.

SPAC’s: A Different Kind of IPO

VectoIQ’s bid for Nikola is typical for a SPAC.

A SPAC is a large pool of money—often $100 million or more–looking to merge with a private company and bring it public.

Think of a SPAC as kind of a backdoor entry to the public markets.

Unlike a traditional initial public offering (IPO) a SPAC merger doesn’t require a roadshow.  There is no broker/dealer underwriter.  The SEC documents are not as extensive.

For private companies not looking to raise new capital (or for those looking to cash out), it can be a preferable route to the public market.

SPAC IPOs are gaining momentum.  The number and dollar value of IPO’s have been rising for 10 years.  So far 2020 looks like another record breaker. 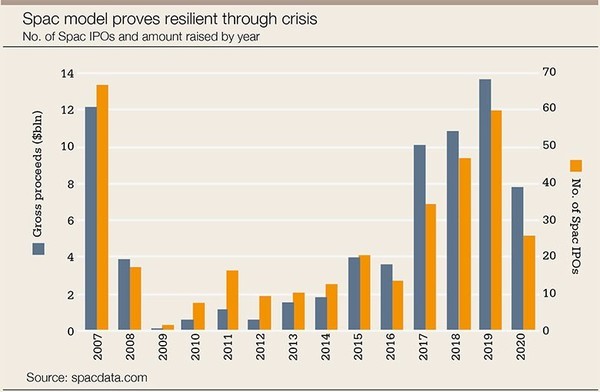 Also typical was the SPAC structure of shares and warrants.  For VectoIQ, each unit consisted of one share and one warrant.  The warrants gave investors the ability to purchase a share at $11.50.

Each SPAC comes out with a share and warrant IPO and most price the warrants at $11.50.  The variable is usually warrant fraction.  Sometimes investors get a full warrant, sometimes they get half, sometimes less.  It all depends on demand for that SPAC.

After the IPO, the shares of VectoIQ did nothing for almost two years.  The company was just a shell, holding cash in short term treasuries.

But behind the scenes the managers of the SPAC were looking for a deal.  When they found the right one (Nikola), they made it happen.

The Rules of SPACs

The word “blind” is appropriate.  At the time of the SPAC IPO, investors do not know what the deal might be (in fact it would be illegal if they did).

So why would someone invest blindly?

It comes down to the SPAC rules.

First, the SPAC has a deadline to find a deal.  Maximum of 3 years but usually capped at 24 months.

If the SPAC does not find an acquisition in that timeframe the investors get their money back – with interest.

Second, if you don’t like the acquisition, you can ask for your money back.

At the time of merger (this is called the De-SPAC transaction), the SPAC is required to offer SPAC shareholders the option to redeem for $10.

Hedge funds like SPACs because they are what is called “a free carry”.  That is to say – a free shot on goal with an opt-out clause.

But the biggest winners in a SPAC are the founders – also called the sponsors.  They manage the IPO and look for the deal – and in return they usually get 20% of the SPAC shares – for free!

It is a sweet setup, but only if they get a good deal. Which means their interests are aligned with investors.

But it does create a hurdle – any deal the SPAC finds needs to overcome this 20% free ticket for the founder.

Some of them do.

At the close of the transaction between VectoIQ and Nikola the share structure will consist of:

In total there will be about 428 million shares outstanding (including in-the-money warrants).  At the current price of $25.75 that values the company at $11 billion.

In this case the sponsors at VectoIQ found a deal that more than made up for the free founder shares.

Is Nikola worth that much?  That is going to depend on your take on the electric/hydrogen vehicle market.
In their slide deck, Nikola estimates 14,000 BEVs and 30,000 FCEV sales in 2027.  With estimated EBITDA margins of 12.8%, the company forecasts EBITDA could be $1.35 billion at that time. 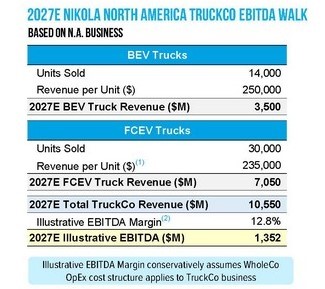 If that turns out to be right, then maybe Nikola will not look quite so expensive. Regardless, you can’t argue that early investors in VectoIQ did well for themselves. Those investors paid $10 for a unit.  That is one share, one warrant. With the stock now trading at $25+, they are making out like bandits.

Some Winners, Many Losers

Recent SPAC successes like Virgin Galactic (SPCE – NASDAQ), Nikola and DraftKings (DKNG – NASDAQ) conjure up big hopes.  But not every SPAC ends well.  In fact, more often then not, they flop.
More recent SPACs with an energy bent have struggled to get out of the gate.  Black Ridge Acquisition Corp (AESE – NASDAQ) raised $138 million in 2018 to do deals in the energy sector before doing an about face and buying WPT Entertainment and an esports business called Allied eSports.  The stock last traded at under $2.

Spartan Energy Acquisition Corp (SPAQ – NYSE), which is sponsored by Apollo, is coming up on its 2-year IPO anniversary in August and still hasn’t done a deal.  It trades at $10.24.

Very recently, Alussa Energy Acquisition Corp (ALUS – NASDAQ), a SPAC targeting oil and gas acquisitions, raised $250 million in an IPO in November.  They have yet to complete a deal.  It trades at $9.65 – so under the deal price.

Pure Acquisition Corp (PACO-NYSE), which raised $414 million in 2018, did complete an acquisition in early May – of HighPeak Energy – a Permian E&P, but only having trying and failing to complete the same deal in October.  It trades at $10.50.

How to Play the SPAC Market

There are THREE ways to play the SPAC market. That’s because there are usually THREE listings for each SPAC.

The first is to buy a new SPAC IPO out of the gate.  New symbols will trade with a “.U” extension – this means you are buying the unit – the share and the warrant. The warrant will give this unit some extra value, but often only 10-40 cents. So you if you don’t like the deal, you’re only losing that premium when you return your stock to the company.

But at some point (usually about 30 days) the warrant starts to trade separately; it gets stripped out. When that happens, the leverage–and the risk–is in the warrant. It often trades with FIVE letters in the symbol, and ends in a W. If the deal–like VTIQ–ends up being hot and the stock goes from $10 – $25–well, the warrant is a 10-30 bagger very quickly. But if there is no deal for the SPAC or the market doesn’t like the deal, the warrant can become worthless. Warrants can trade for well over $1 sometimes.

That means be discerning.  Do your homework on the deal making team.  Also check the deal terms and disclosures around the sector they are looking at entering.

Thirdly, you can just buy the stock after it gets separated out. So to repeat, in SPACs you almost always have the choice of buying the stock, the warrant, or the unit with both.

Maybe a better question is–WHEN do you buy it. You can buy it blind right away or the second way to play a SPAC is to wait for a deal.

In other words – even with the best of the SPACs, there was no rush to buy.

What is clear is that the SPAC model is gaining momentum right now.  We should expect more companies coming to market through SPAC mergers.  Given that some of these names are catching investor attention, it is a space worth keeping an eye on.