Home Investing GREENING THE GRID AND THE SOIL Calgary Junior Solves Many Problems with... 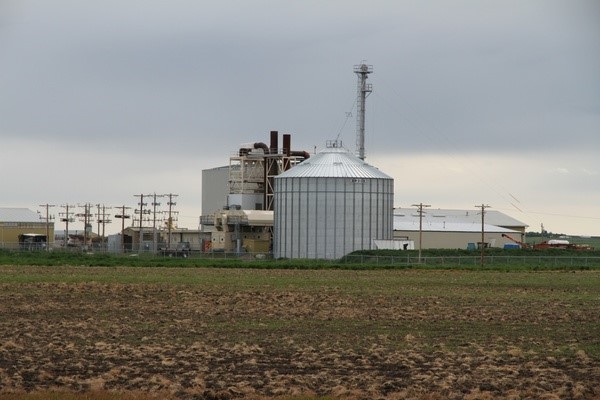 A Calgary company is greening the power grid with large amounts of cow manure—and solving three other large problems along the way.

EarthRenew Inc. (ERTH-CSE) has a patented technology that can heat, dry and pelletize cow manure, transforming it into high-end, certified organic fertilizer—and with much higher nitrogen.

And because it’s in pellet form, its fertilizer can be put into the ground not just in the traditional short windows during spring and fall, but also when farmers work the land.

The process—which will be first showcased just 30 minutes east of Calgary near Strathmore AB–also creates extra electricity that can be sold into the grid.  The company earned over $100,000 in revenue in January 2020 as they sold their renewable power into Alberta’s grid during a cold snap.

But while the organic fertilizer and renewable electricity are very positive, the biggest benefit of this process may go to European and American farmers that have much more intensive agriculture than wide-open Canada.

With cattle herds in the tens of thousands in the US and dairy farms in the hundreds in places like Holland (and the US), there is a huge concentration of chemicals like phosphorus in the animal manure that gets spread out over a small area.  The phosphorus seeps into groundwater or streams and ends up in rivers & lakes and creates algae blooms.

(The Dutch actually had phosphate credits like North America has carbon credits!)

The same thing is happening with dairy farms in Washington State, California, Ohio and Wisconsin—too much manure and not enough land to spread it on without causing problems.

So there are LOTS of benefits from this patented low tech process.  They can even supply surplus cheap electricity to bitcoin miners on-site if the grid doesn’t want their excess power. 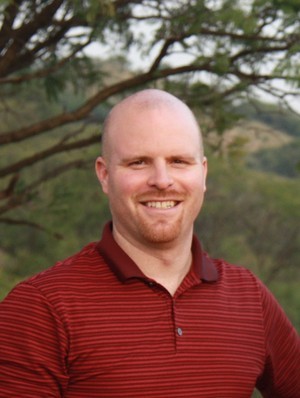 “High intensity farming is actually a big problem in Europe and the States,” says EarthRenew CEO Keith Driver. “You wouldn’t know it, but all these nutrients are being flushed into the system off the land, and it’s killing waterways and we’ve got a win-win-win, nobody loses solution, to this problem.  It’s unbelievable.”

Driver says the process had about $70 million in R&D put into it in the 2000s, but then the Alberta inventor died and the price for the product dropped.  It fell into bankruptcy.

In 2019, a group of Toronto venture capitalists recruited Driver to update the technology and make it commercial.

The prototype facility is on a 25,000 head cattle farm near Strathmore Alberta.  The plant must be where the manure is, and the market for the product is usually a 40 km radius.  However, that could be extended with higher nitrogen ratio fertilizer.

“The plant itself is really simple,” says Driver. “The whole technology is you can take manure and put it through a dryer and turn it into fertilizer. If you do it at the right temperature for the right amount of time, you can invert it from conventional manure into organic listed and approved fertilizer.”

There are two revenue streams.  Driver says they buy natgas and produce electricity with it through a Rolls Royce turbine.

Driver hesitates to call theirs a renewable energy, as it does require some natural gas to create 4 MW of electricity.  He says their process would be best described as co-generation or waste heat.

The electricity is sold back to the grid or to bitcoin miners on site, and the waste heat from the turbine thermally treats the waste to make it ready to be mixed into organic fertilizer.

“That’s how we’re going to make the money,” Driver says, “because you get the manure for free, you get the heat for free, you’ve got some equipment and some people to turn it into pellets but otherwise it’s pretty low marginal cost of production at that point because the power in the province, the power price more than covers the cost of making electricity.

Organic fertilizer is definitely a growth trend—see the stats below: 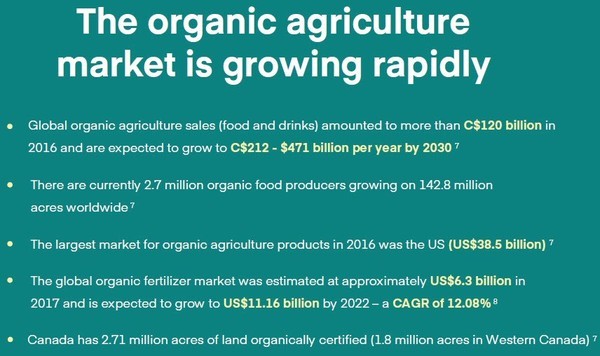 Driver says that from scratch, an EarthRenew plant could cost CAD$17 million, with payback of roughly 3.5 years. With a simple process and very little maintenance costs, he expects each plant to be long term cash cows (pardon the pun).

The Strathmore facility is being upgraded now to produce commercial product for spring 2021.  New seed formulations have already been certified organic, but EarthRenew is working with several commercial and university groups to develop an organic formulation that is much higher value-add, with higher nitrogen levels.

Both private and public monies are being raised to not only get Strathmore fully operational, but also source the second plant.

Their timing could be very good, as “green” stocks and renewable energy stocks are in vogue.  It’s a unique business model that has multiple revenue streams,  and it solves A LOT of problems.

DISCLOSURE–I do own some shares in ERTH.