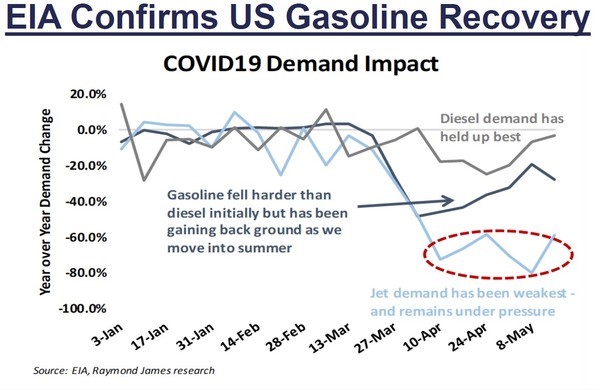 Energy has been left out of the bull market so far.

Yes, oil and oil stocks have recovered from the depths of the crisis, but are still down on the year.  The price is firmly above zero now – which is saying something, I guess.

But will we ever have another bull market in oil?

There is hope.  A few crude bulls out there are willing to stick their necks out while everyone else has thrown in the towel.

While the brokerage arm of Canada’s #2 bank, BMO, has a conservative price target on oil for the next couple years ($42/bbl WTI in 2021) they see a massive supply gap developing that could lead to much higher prices in the following years.

US brokerage firm Raymond James believes that bull market could come sooner.  They forecast oil could hit $65/bbl in 2021.

That is less than a year away.  If they are right, there is a tonne of upside for oil equities.

In April, Raymond James was expecting a tough 3 months.  They saw physical crude below $20/bbl through the second quarter.

But by the beginning of June RayJay changed their tune.   They came out with a much more upbeat assessment.

Why the flip?  It begins with what happened – or more exactly, what did not happen.   Demand destruction in April was far less than what they and the consensus had modeled.

The “math” of huge demand destruction simply did not work.  The consensus was that demand fell 25-30 million barrels  a day (MMbpd) in April.  But measured storage only rose 10 MMbbl/d.  Remember that shut-ins in April had not happened yet (the Saudis were still flooding the market, the OPEC+ agreement did not start until May).

Where Did The Oil Go?

There is only one possible answer, says Raymond James.  Demand destruction was far less than what we have been told.

In addition, OPEC+ cut compliance turned out to be on the high side.  Raymond James estimates that compliance with the OPEC+ cuts has been 6.9 MMbblpd, which is 1.2 MMbblpd more than the consensus forecast.

By the beginning of June, oil inventories were already falling.  That will only accelerate through the rest of the year.  RayJay expects inventories to normalize by late 2020 – FAR EARLIER than they (and anyone!) had previously predicted.

Oil inventories remain high but they aren’t that high.  U.S crude oil inventories, the markets bellwether, are ~40MMbbls above the peak of the last 5-years.  Product inventories have not even broken out to new highs.

Floating storage remains high – it is up 269% year-over-year – but it is beginning to come down as well.   Bloomberg reported that floating storage came down last week for the first time since the price war – dropping 8% on the week. 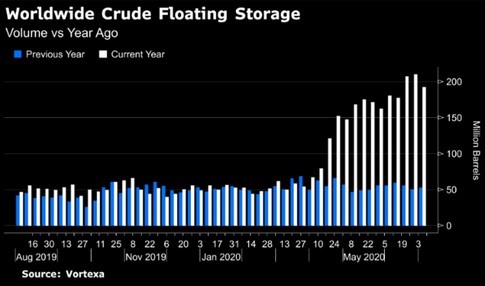 Going forward we have both positives and negatives.

On the negative side we’re still not flying at all internationally. Domestically flights are far from full.

We still don’t know how much the “work-from-home” lifestyle will become a permanent feature.

Overall, demand remains below where it was pre-pandemic.

But it is not all doom and gloom.

In an interview with IHS Markit, Saudi Arabia CEO Amin Nassir said that he was “very optimistic” about the second half, particularly in China:

We see it in China today, if you look at China today its almost at 90%, in gasoline its around 95% in China. Gasoline and diesel are picking up to pre Covid levels, jet fuel is still lagging in terms of less air travel and all of that.

Looking at demand for the three main petroleum products in the United States, diesel held up well to begin with, and gasoline is making a recovery.  Jet fuel remains the laggard.

Overall RayJay estimates that May demand is up 5-7 MMbpd over April.

But perhaps the biggest impact is to the long-run – what low prices and virtually no access to capital is doing to U.S shale and international drillers alike.

What we learned from 2016 is that US production declines sharply when prices drop below $35/bbl.  At current strip pricing U.S oil production will continue to fall.

Nothing really gets going until we see $45 and it looks like it is here to stay.

It is not just in the United States.  RBC Capital Markets reported that the international rig count had fallen to levels last seen in May 2003! 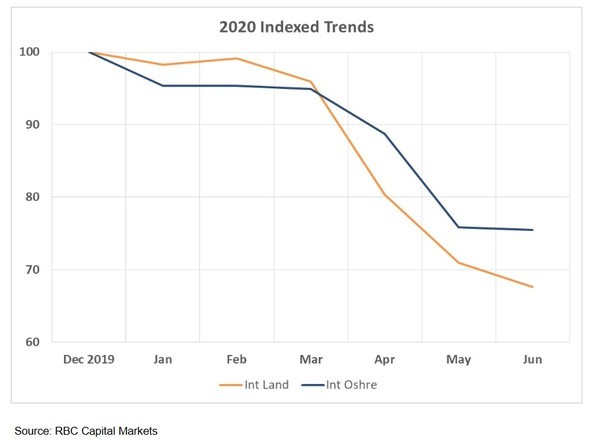 Capital spending on projects will undoubtably resume its decline in 2020, leading to thin-pickings of new capacity projects.

In a report titled “Searching for Solace:  Scenarios for Non-OPEC Supply” BMO Capital Markets estimated that global upstream spending cuts totalled $90 billion – or 25% – year to date.  The current Brent price forecast puts as much as “40% of the project pipeline” at risk of delay or cancellation.

This leads BMO to predict that a “supply gap” will develop – with the result being “higher crude oil prices… to incentivize investment”. 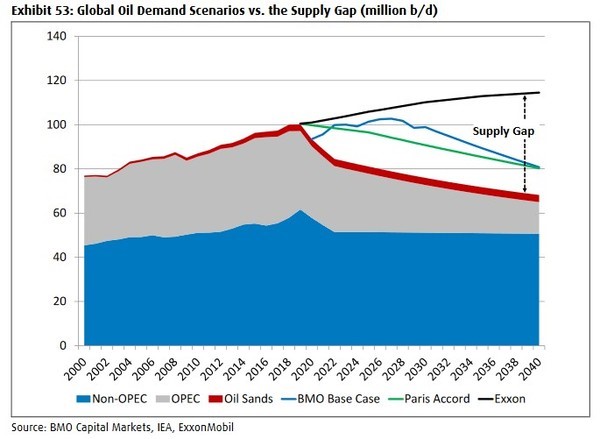 Raymond James believes that inventory is already drawing and that this will accelerate as the year progresses. 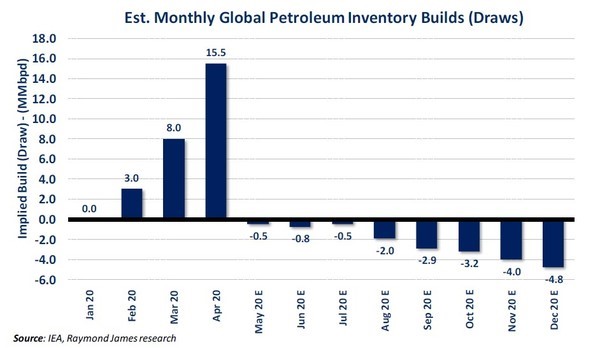 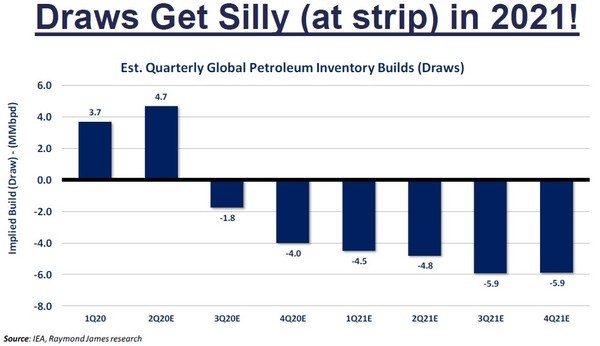 By the second half of 2021, this level of inventory draw would result in inventories being significantly below (like 30% below) any time in the last 15 years.

Obviously, this is not a likely outcome.  Instead, a combination of the following will happen:

the point most relevant to OGIB subscribers is the first.  Raymond James forecasts that we will need $55+ WTI in 2021 to get the rebalancing that we need.  They forecast $70 by the fourth quarter of 2021.

It goes without saying that E&P stocks are not priced for this scenario.

Consider where RBC Capital Markets currently pegs valuations.  The majority of E&Ps fall into the right-hand half of the chart below – EV/EBITDA of less than 6x.  This is at $41/bbl WTI pricing. 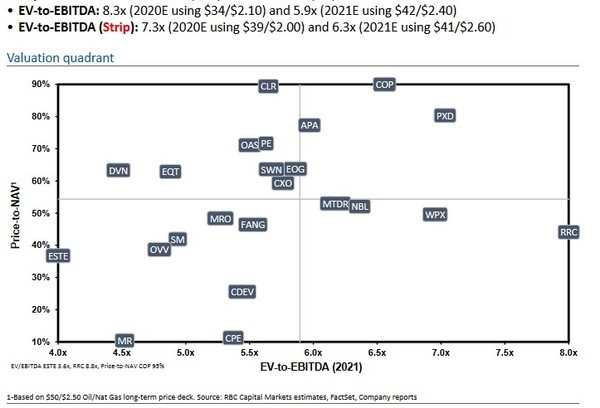 BMO Capital Markets makes the same assessment.  In another recent note titled “Living with Uncertainty”, they describe North American E&Ps as “attractively valued” at 6.5x EV/EBITDA based on $38/bbl oil.

Not all oil companies are created equally though.  The shale business is riddled with debt, particularly in the U.S.  If Joe Biden is elected president, growth could be hard to come by.  We just saw the Dakota Access pipeline shut down by a Federal judge until a lengthy environmental review is completed.  The push back on North American oil will only intensify under a Democratic President.

Bad for shale but good for the price of oil.  And for international producers that can pick up the slack.

Maybe, just maybe, the lack of new non-shale oil finds, the lack of capital spending that has been going on for years, is finally going to catch up with the industry.

As BMO Capital Markets stated, “the industry’s exploration success rate has severely waned over the past decade” and “international non-OPEC discoveries are on track to hit a record low in 2020”.

They say it is darkest before the dawn.  Perhaps we will find that Raymond James was prescient to look beyond the current darkness and see a light peaking in – through the cracks of a supply gap.