Here’s where the attention is shifting now

The Montney gas formation – already the lowest cost gas producing region (that I can see) in Canada just got bigger and better, thanks to a boomer well by Celtic Explorations (CLT-TSX) last week.

Most of the NGL basket here is condensate, or C5, which is by far the most valuable NGL and is usually worth more than oil.  GMP Securities said in a research report that it equates to a 2,235 boe/d test rate – over 10% of CLT’s total current production.

Celtic is calling this new area Resthaven, and it’s located at the very south-eastern tip of the Montney gas play, which straddles the BC-Alberta border.  This map came from a report on the play on Thursday Nov 18 by Macquarie Capital. 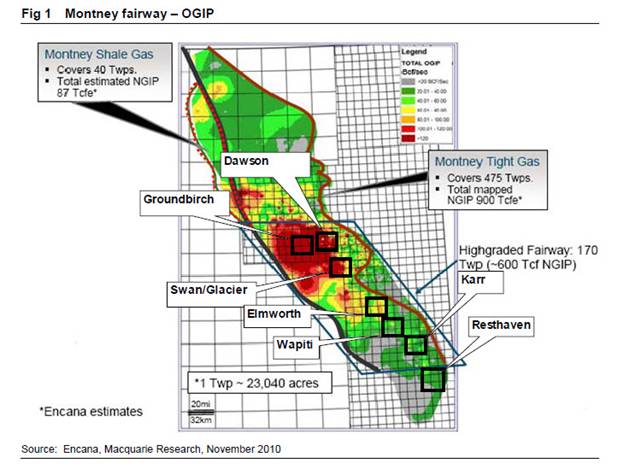 What perhaps is even more remarkable is that Celtic was able to secure 280,820 net acres (438 sections) in Resthaven over the last year at low prices.  It is really difficult to get that size of land block anywhere in western Canada now; the competition is so intense among the many Calgary based oil and gas companies.

The juniors with the biggest land position in this play are Donnybrook Energy* (DEI-TSXv) and Cequence Energy (CQE-TSX).

Cequence says they have 50 sections of land in what they call the Simonette area just east of Resthaven.

GMP Securities suggested this play could be worth $38 billion, or $39 a share to Celtic.  There were several brokerage firm reports out on this play, and their economics were similar – costs of a well would be $6-$7 million. Estimated Ultimate Recovery (EUR) would be roughly 4-6 bcf, or billion cubic feet.  Canaccord Capital said in their research on this play that this is TWICE what the current best area of the Montney, Kaybob, gets.

GMP says the NPV (Net Present Value) of each well would be roughly $11 million. The NPV, in very rough terms (and my accounting knowledge is just that—very rough) is the amount of money the company expects to get back from all the production over the life of the well – after costs.  So it could be called the profit.

Multiply that by just $10 million  by 350 potential horizontal well locations, and you get $35 billion.  GMP Securities says that’s assuming only 20% of the land is prospective; the potential gross # of wells could be much higher.

The NPV of a good Bakken well in Canada is about $5 million – maybe it’s up to $6 million now with lower costs and better recoveries over the last 12 months – on a (roughly) $5 million well.  But investors get the picture that this is a great well – twice the NPV as a Bakken light oil well – at $5.50 gas.

For Donnybrook, 80 net wells at $10 million per well creates an unrisked NPV potential of $800 million.

Until now, the Kaybob area of the Montney has been considered to have the best economics of the entire play.  Now these brokerage firms are calling Resthaven another Kaybob.