Oil prices have made a big move up since March with the recent move to almost US$73 per barrel retracing over a third of the drop from the US$147 peak last summer to the low of almost $US30 earlier this year.

Retracements during market rallies generally recover anywhere from a third to two-thirds of the price drop, so oil prices could run-up as far as US$110 in the near-term before facing serious resistance.

However, there are several resistance levels that oil prices need to break through, particularly at US$78, US$88 and US$100, for the rally to continue.  As shown in the chart below for light crude oil, the 50-day exponential moving average is about to cross above the 200-day exponential moving average – this is called a golden cross – which is bullish. 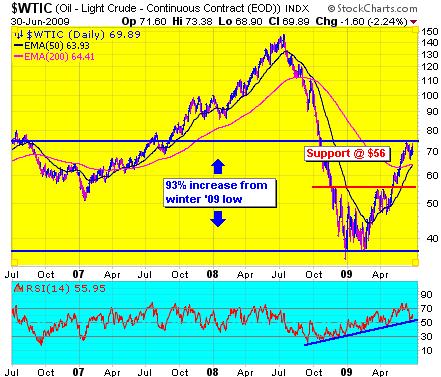 Oil prices have outperformed the share prices of oil companies in recent months and further oil price increases could continue to outperform.  Since March, oil prices have gained 93 per cent to their recent peak (see chart for light crude oil prices above), which compares favourably to the gains experienced by the Energy Select Sector SPDR Fund (XLE-NYSE, US$48.05) and the iShares CDN S&P/TSX Capped Energy Index Fund (XEG-TSX, $16.65).

The XLE and XEG exchange-traded funds (ETFs) gained only 53 per cent and 62 per cent to the height of their recent peaks, respectively, with the XEG ETF receiving additional returns in U.S. dollar terms from Canadian dollar strengthening this year (see charts below).

As I marked on the chart, oil prices could potentially move down to the US$56 support level if the Relative Strength Index (RSI) uptrend line is breached (see bottom panel in the chart above).  RSI is a momentum indicator, or oscillator, that measures the relative strength of a security against itself.

Alternatively, oil prices could break through resistance at US$78 if the RSI uptrend line remains intact.  I am holding my oil stocks for now, but watching this indicator closely.  I will likely sell some individual positions once this RSI uptrend line is breached. 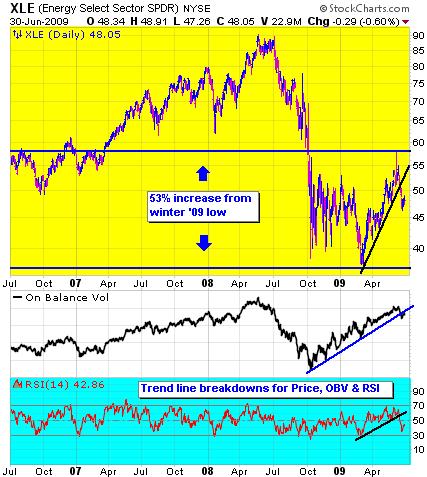 The XLE ETF’s trend lines for price, On Balance Volume (OBV), which measures the general buying and selling pressure on a security’s price, and RSI have all broken down with the price trend line breach occurring first, which is unusual.  In any event, the technical outlook for the unit price is bearish for now. 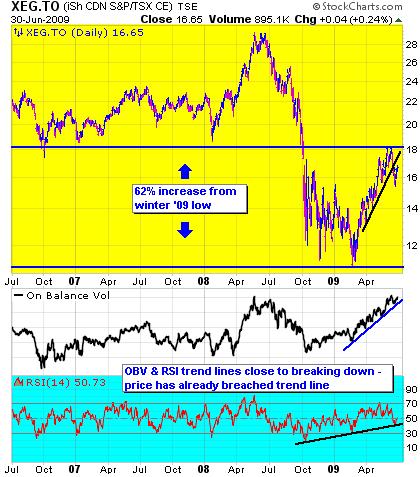 The XEG ETF’s trend lines for OBV and RSI are close to breaking down, although the price uptrend line has already been breached.  Similar to the XLE ETF, this situation is unusual and the technical outlook for the unit price is bearish for now. 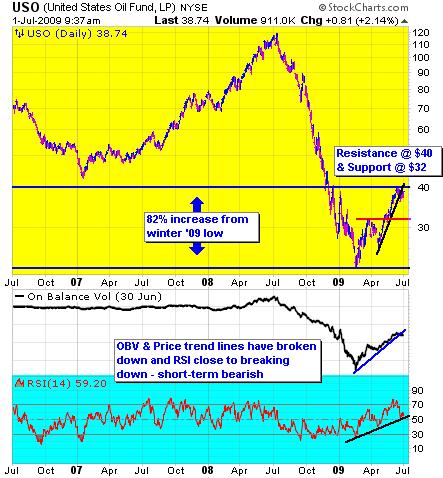 An affordable way to participate in future oil price movements is through the United States Oil Fund, LP (USO-NYSE, US$38.74), which is an ETF that tracks the performance of oil prices.  Since March, this ETF has gained 82 per cent to its recent peak (see chart above), which is not as good as oil’s 93 per cent gain, although the oil price gain does not reflect transactions costs.

The USO ETF is facing technical difficulties similar to the XLE and XEG ETFs, at least in the short-term, as the OBV and price uptrend lines have broken down, the RSI uptrend line is close to breaking down and there is resistance at US$40.  A safer entry point to buy the USO ETF may present itself if oil prices break down and successfully test the US$56 support level mentioned above.

The USO ETF may test its support at about US$32 (see red line in chart above), which would provide a lower risk entry point for investors interested in participating in oil’s potential ongoing outperformance of oil stocks.

Brian Hoffman, CA, CPA, is an affiliate of the Market Technicians Assoc. and a member of the Canadian Society of Technical Analysts (E-mail: bk.hoffman@rogers.com)

This Country Is Caught In A Catch-22 with Energy