A new natural gas pipeline in the United States is allowing cheap gas from the Rockies to displace more than 10% of Canada’s gas exports to the Midwest US, forcing more Canadian gas into storage and lowering natural gas prices for Canadian producers.

The 1,679 mile, $4.4 billion Rockies Express pipeline, or REX, is providing about 1.5 billion cubic feet per day (bcf/d) of cheap gas from the Rockies through the Midwest to Ohio. The latest section of REX just opened June 29. (www.rexpipeline.com)

The new pipeline is displacing about 600 million cubic feet per day (mmcf/d) of Canadian production, says Jack Weixel, director of Energy Analysis for Bentek Energy.  Bentek provides specialized energy pipeline information to clients in the oil and gas sector in North America. Weixel estimates the mid-continent corridor of pipelines send just over 5 bcf/d of gas, net, to the US from Canada (some western Canadian gas goes back into Southern Ontario via Michigan).

“It has pushed off about 600 million cubic feet per day off the Northern Border Pipeline, which runs into Midwest pipelines at Ventura, Iowa,” Weixel told me over the phone from his Colorado office. 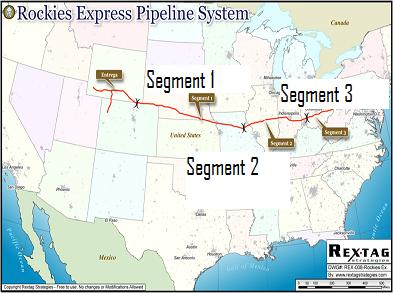 “REX is flowing at 1.5 bcf/d, which has forced some (Canadian) gas up the northern natural gas pipeline.

“And Rockies gas is cheaper than Canadian gas. REX is more efficient versus the Northern Border (Pipeline), an older pipe that serves Ventura.”

Weixel said the price for Rockies gas has always been low, with a lack of pipelines out of the area. Now that cheaper gas is being pushed farther east with REX, and pushed back Canadian gas.

“Even in face of declining production you (Canada) are now increasing storage, which is a pretty big shift,” Weixel says. He estimates Canadian production is down 1 bcf/d since January 2008.

It’s relatively cheap to move natural gas around the US, whereas transportation costs (read: pipeline) down from Canada is making Canadian gas less competitive. Pipelines on both sides of the border are regulated, says Weixel, and get a fixed return, but there is more competition in the US so costs are lower. And a new pipeline simply has lower operating costs than an older one – as REX vs. the Northern Border Pipeline shows. 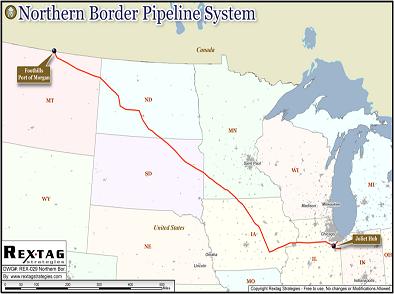 Normally Canadian gas would flow through to the big consuming area of the US Northeast, but that market is having a lot less demand this year. Weixel says he sees slightly less Canadian gas being pushed off the grid in the fall, but adds that Canada needs to go find new markets for its gas.

“The US has solved its own problem, and we are less reliant on Canadian gas. It’s still an important part, especially in the Northeast, but not so much for Midwest or California.” A new pipeline, called RUBY, is already being planned to take Rockies gas to California – another big market for Alberta gas, Weixel says.

The Liquid Natural Gas export terminal from Kitimat, on the west coast of British Columbia, is a great idea for the Canadian industry he says. Alberta needs to do more to develop export markets for its natural gas. 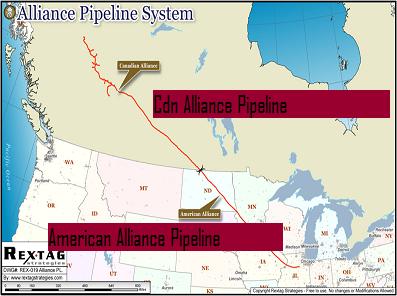 Before ending our call, I asked him for his outlook on natural gas prices in North America.

“We could see US$2 gas (per mcf). It’s definitely possible. We haven’t seen the production declines down here yet. Rigs are dropping but they are more efficient now. And the success rate is much higher in drilling wells into these new shale formations. (The production decline) is coming, but not as foretold as everybody thought it would be.”

This is why I am keeping my portfolio in oil weighted energy stocks for now.