Home Top Stories Refineries – Why I’m Not Ready to Buy

The big news out this last week was that Philadelphia Energy Solutions (PES) will permanently shut its South Philadelphia refinery in the next month.

Whether “permanent” means permanent, well, we’ll see.  But at the very least, the refinery isn’t coming back any time soon.

I’ve been watching the refiners closely for the last couple months.  The stocks have been miserable performers–and that has actually piqued my interest.

The South Philadelphia refinery is a good-sized one at 335,000 barrels of oil per day (bopd)–making it one of the larger ones in the country.

The question is – does this new shortage of gasoline increase prices enough to increase crack spreads and make refiners a buy?

I would love to believe that.  Like I said, they have been kicked in the teeth. They can have big moves up when circumstances are right.

Consider how poorly they’ve performed since the peak in the summer of 2018: 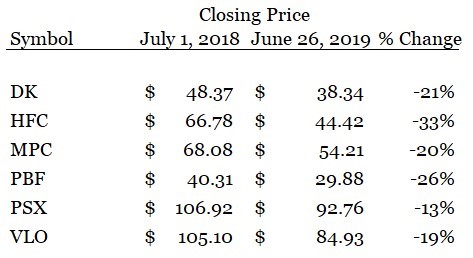 If this group could turn around, the upside could be material.  I’d love to time that turn.

The problem is–I’m not seeing it yet.

The entire refining complex got a nice kick on Tuesday from the Philadelphia news.  Kudos if you were able to catch that.

Some will benefit more than others.  PBF Energy (PBF-NYSE) has 34% of their capacity on the northern East Coast, so I would see them as a beneficiary.

But taking a step back, I just don’t see the refiners outperforming until the Market is confident oil product demand is back on track, and that means a jumpstart to the global economy.

Second, we are just not short of refining capacity.

While the loss of East Coast barrels will hurt, there is enough product capacity out there and so they will be made up with imports from the Gulf Coast or overseas.

Crack spreads have been weak for most of the year.  While they briefly recovered here in Q2 19, they are back down to 5-year lows. 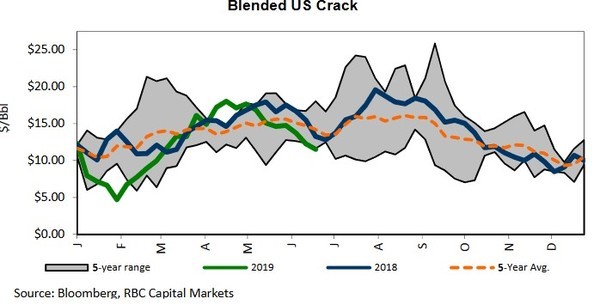 This is not just happening in the United States–Asian refining margins have also been weak.  Singapore gasoline margins have been close to break-even.  On average for the year they are the lowest since 2008.  Chinese oil demand has been declining and Chinese refiners are responding by exporting products.

That isn’t really a bad picture–it’s just not a great one.

You need to believe in one of two things to be willing to bet on the refiners.

Refiners are not safe havens.  They are extremely susceptible to economic swings.  Whenever I get the urge to buy a refiner I go back and remind myself of what happened in 2008.

Now I realize that 2008 was a once in a lifetime event (let’s hope!) but its still worthwhile to review just how bad the refiners did in that recession.

Looking at Valero (VLO-NYSE) –the biggest and “safest” of all the refiner names–the stock dropped from $50 to $10.

Overall they underperformed a terrible overall market by a significant margin.  On average the names fell nearly 80% top to bottom. 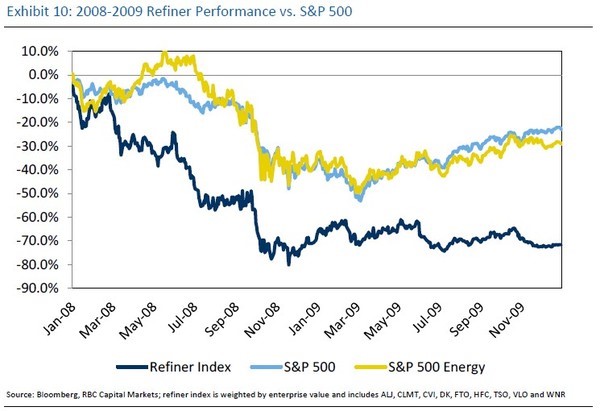 The recovery was even worse.   It took nearly two years after the broad market for the refiners to begin to recover.

The inescapable conclusion is that in a slowing economy a bet on refiners is a dangerous one. Before I can buy a refiner for anything more than a quick trade, I must have confidence in the economy.

If you are looking for a reason to buy refiners, you don’t have to look any further than IMO 2020.

Last summer the prospects of IMO 2020 sent the refiners up to their highs.  Some of that has come off shine has come off since then but IMO will still have an impact.

Investors are still looking at a potentially major disruption to the crude products market.  There will be increases to crude distillate demand, but  how much though is still a matter of opinion.

As a quick recap, the shipping industry has historically used high-sulphur fuel oil to run their ships.  This isn’t very good for the environment and the new UN mandated sulphur cap of 0.5% is intended to rectify that.

IMO 2020 means that ships will be required to either switch to a low-sulphur fuel or use scrubbers on the ships to remove the sulphur from the exhaust.

At this point we know where the scrubber number is going to be;  estimating the required distillate demand from ships isn’t too difficult.

RBC Capital Markets put out a note earlier this year estimating that 860 mbbl/d of additional distillates would be required by refiners through higher utilization rates. 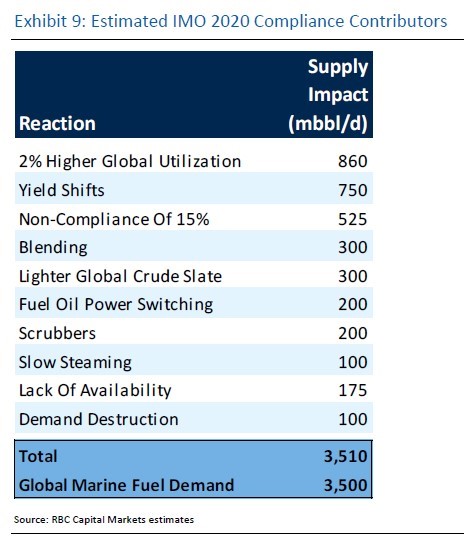 They went on to say that higher utilization would require better margins.  Refiners respond to price, and we need to see crack spreads increase to spur the supply.

The more complex refiners (mostly located in the United States and run by the big players like Valero (VLO) and Marathon Petroleum (MPC)) will incur extra benefits.  They have cokers and hydro-crackers that can take advantage of what is expected to be wider heavy oil spreads to produce gasoline and distillate products.

That is the bull-case in a nutshell.

When does IMO start to impact the market?

On their Q1 call, Valero said they expected effects on the high-sulphur fuel side to start to appear in late-September, with impacts on distillates occurring in November-December.

If I had more evidence that oil demand (and the global economy) was strong, I would look at the impact of IMO 2020 and jump in for a trade.

But my question is, does it get lost in the shuffle?  A slow economy could offset a lot of that upside.

Another factor to watch is the WTI-Brent spread, which has curiously  been narrowing.  US refiners have the advantage of buying and refining WTI crude, which has trades at a discount to other crude types – particularly the Brent crude used by most European refiners.

The discounted WTI crude used by U.S. refiners boosts their margins as the refined products trade at similar prices across all regions regardless of the crude used to produce them

I’ll keep watching spreads, the forward curve on distillates, and the spreads on heavy oil.  Maybe these spreads will start to show me I’m being too cautious.

I’m willing to change my mind as the facts change.  But until then I’ll take the safer path and keep my money in my wallet.

EDITORS NOTE: I cover all kinds of energy stocks–including some solar stocks, which have been doing great lately.  My latest solar pick is up $7/share in the last 6 weeks. I think it’s going A LOT higher.  Get the name and symbol on this stock: Click here for quarterly access $ 149 per quarter (30 days no-questions refund)