A PEA-sized Company with a Huge Natural Gas Vision

What do you make of a $70 million company developing a $10 billion project?

Well that is exactly what we have in the case of tiny, Calgary based Pieridae – trading under symbol PEA-TSXv.

Its an uphill battle, but I have to admit the company is giving it their best shot.  After you’re done reading, you’ll realize it’s not as far-fetched as you think.

Pieridae is working toward the development of the Goldboro liquified natural gas (LNG) project in Nova Scotia on the Atlantic Ocean.

The Goldboro terminals will be located 250 km NE of Halifax.  It will be made up of a 5 to 10 million tonnes per annum (mmtpa) liquification and loading facility, depending on the final design decision. 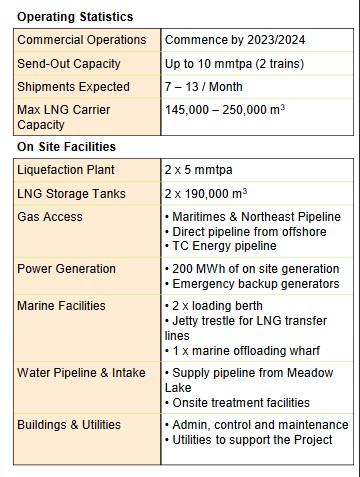 For comparison, Shell’s LNG Canada project is for 14 mmtpa.

But unlike LNG Canada, which has Shell, Petronas, PetroChina, Mitsubishi and KOGAS all with stakes in the project, Goldboro is 100% owned by tiny little Pieridae.

If that’s not enough chutzpah for you, Pieridae plans to run not just the terminal, but the upstream assets as well.

It would all seem perfectly implausible if the deal didn’t have one large backer with a significant interest in seeing the project being built:  The German government.

The LNG from Goldboro will be shipped across the Atlantic.  Almost the entire first train of the project (about 4.8 mmtpa of a total of 5 mmtpa) will be delivered to German utility giant Uniper.

Uniper is the largest utility in Germany.  They buy 40% of the natural gas consumed in Germany today.

Their contract with Pieridae, which has a 20 year take or pay term, will be for 10% of overall German gas demand – that’s HUGE!

Germany is desperately looking to diversify their gas supply.  Right now, 60% of their natural gas imports come from Russia, which isn’t a safe source of supply (ask Ukraine).

Natural gas is deemed a “scarce commodity” essential for the German economy, which means that imports qualify for the export credit assistance programs.

With Goldboro being a large natural gas importer, it qualifies for Germany’s “Untied Finance Credit” (UFC) program, where the German government guarantees loans for a very big part of the project cost.

The first train of the facility would qualify for a US$3 billion loan guarantee under the program.  That’s HUGE!

In addition, Pieridae will qualify for another US $1.5 billion of loan of guarantees for upstream development of natural gas assets.

All told US $4.5 billion of the US $6 billion expected costs will be guaranteed.

What was implausible becomes more plausible.

Of course, Pieridae still needs to go out and find a commercial lender willing to fork over the $4.5 billion of funding.  But that is a lot easier (and cheaper) when the loan is backed by the German government.

To be sure, there are hurdles that remain.  Before a lender will commit to such a tidy sum, they want to know the costs in detail.  This is where we are at now.

Pieridae has hired Kellogg, Root and Brown (KBR) to perform an engineering and design study that will include a lump sum estimate of project costs that can be used by prospective lenders.

That study – expected to be completed early in 2020 – is really The Next Big Milestone for Pieridae.

In June Pieridae made a splash with the news that they had acquired Shell’s upstream Alberta assets.

It’s all part of Pieridae’s plan to secure the natural gas supply to feed their LNG terminal, once built.

While it may seem audacious that Pieridae would plan to own not only a multi-billion LNG terminal but the upstream natural gas assets as well – you have to understand this all comes back to cheap German capital.

Shell’s assets produce about 28,000 boepd.  They are primarily older producing wells, many of them 20-30 years old.

The midstream infrastructure was built for much higher production, which means they can be developed without much additional infrastructure.  But most importantly, the assets are conventional reserves and that can be accessed without fracking.

The one stipulation on the US $1.5 billion upstream German guarantee is that hydraulic fracking is prohibited.

Both the Shell assets, and those of the previous acquisition of Ikkuma, fit that bill. 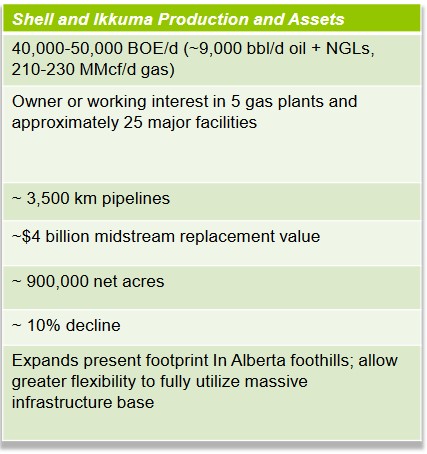 Being a natural gas producer in Alberta is less than desirable unless you have a way to get the gas to market.  Here is where Pieridae has a unique advantage.

There aren’t many projects in Canada that can boast accessible pipeline capacity – but Pieridae can.

The majority of the trek east will be made on TransCanada’s mainline system.  This will be followed by shorter legs on regional TransCanada and Enbridge owned lines. 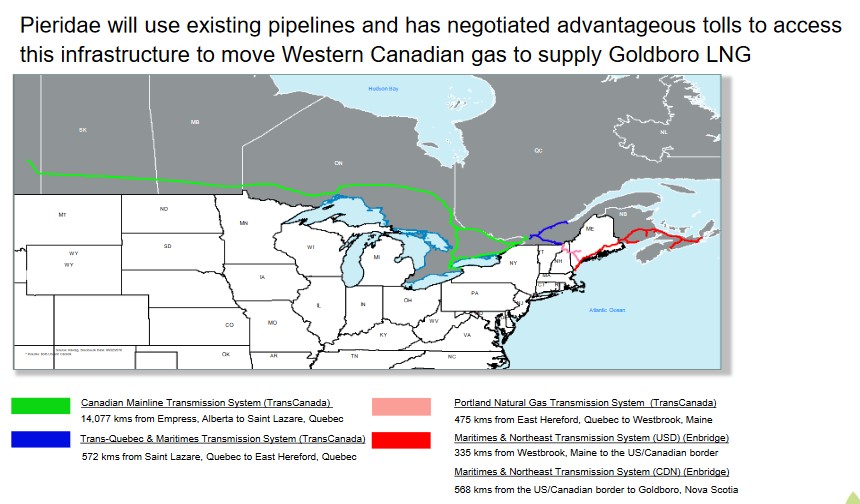 Capacity on each of these lines can be expanded to accommodate Pieridae’s additional volumes by simply adding compression.  Read my lips – no new pipelines!

Pieridae has a few options for reaching a final investment decision (FID) on Goldboro.  But it seems most likely that they build a single train terminal and defer the second train to a later date.

The Shell and Ikkuma assets are sufficient for the first train of the LNG terminal.  The available pipeline capacity on Mainline and the connector pipelines are enough for the first train.  Same goes for the German loan guarantees.

A $6 billion price tag on the first train leaves a funding gap of $1.5 billion.  That is still a tidy sum to be found–and means more debt and equity.

Pieridae expects to issue between $1 billion to $1.3 billion of preferred equity in the project.  This will sit below the guaranteed term debt but above the common equity.  In an interview, CEO Alfred Sorensen said the company is “well along” the process of raising this capital.

The rest of the money – anywhere between $200 million and $500 million – will be new equity (dilution).  The equity isn’t likely to be issued until next year after the engineering and design study and the FID is made.

While those are still big numbers, they seem more attainable as Pieridae gets closer to securing the low-cost debt guarantee from the Germans.

Here is where the rubber hits the road.  Pieridae has forecast cash costs of $4.50 per mmbtu once the first train is up and running. 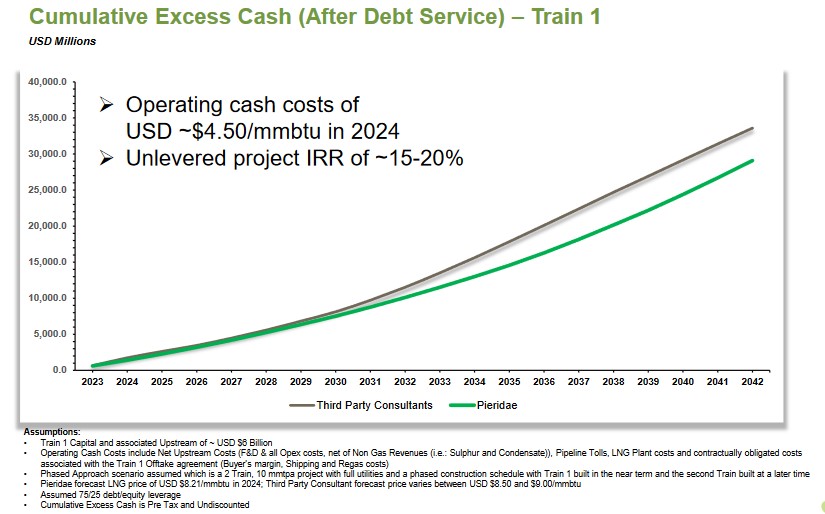 It’s still early in the game but let’s ballpark it to get an idea of the upside.  Assume Pieridae can get 5% debt on the German guaranteed $4.5 billion and 9% on the $1.3 billion preferred.  That would be annual interest costs of $350 million.

With LNG prices of $8/mmbtu (keep in mind Goldboro starts up in 2024 where there is expected to be a shortfall in LNG export capacity) and one train delivering 5 mmtpa per year you can pencil in close to $1 billion of cash flow for the equity in the project.

If we assume that equity is raised at the current share price ($1), there would about 300 million shares outstanding.

That means over $3 per share in cash flow to the common.

Its rough and all the numbers need to be validated but you can see how this could work out big.

If this is David and Goliath, at the very least David has some pretty big rocks in his sling.

In November 2018 VP Mark Brown put the remaining hurdles as:

Since that time the question of supply has been answered.  The pipeline capacity is there, but finalization of an agreement for it, like the equity financing, depends on the KBR assessment of costs.

Look, I would be crazy not to be skeptical that such a small company could make such a big project work.  But the guarantee of the German government, the pipeline capacity, the fact that Alberta REALLY needs a natural gas win – these put some wind in the sails.

At the very least, I’m willing to say this is not insurmountable.

What I would like to see is a partner coming on onboard.

Pieridae has made it clear they are open to it.  It would validate a lot of assumptions.  It would make the financing that much easier.  And it’s not going to hurt the economics much – if the project can get built within currently anticipated costs, there is plenty of cash flow to go around.

The acquisition from Shell tells me that these guys aren’t giving up.  While I’m not convinced they can pull it off, I wouldn’t rule it out.

I am certainly am rooting for them.  We all know the natural gas industry in Western Canada could use this kind of feel good story.

Next post: WHY PRIVATE EQUITY IS POURING INTO MIDSTREAM ASSETS AND WHY INVESTORS ARE NOT

Previous post: This Small-Cap Controls Some Of The Most Important Real Estate in Your Life