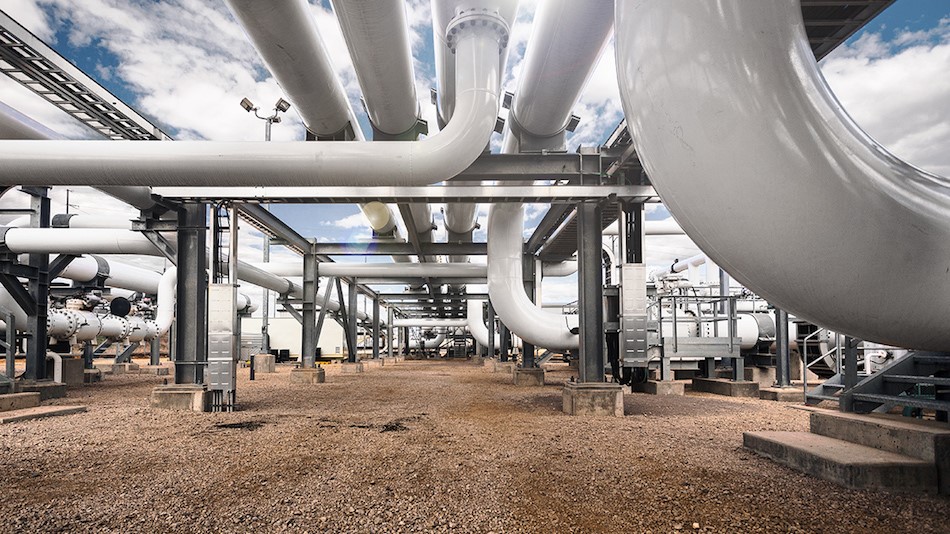 (That Brookfield deal is really interesting.  They aren’t usually active in this sector and they are always value focused.)

A perfect example of this was TC Energy’s (TRP-NYSE/TSX) recent $1.15 billion sale of an 85% interest in the Northern Courier pipeline to the Alberta Investment Management Company (AIMCo).

The purchase price for the pipeline was 14 times EBITDA… a good sized premium to the 10 to 12.5 times EBITDA public midstream companies trade at (and WAY above the 4x that O&G producers do now!).

In January this year, I suggested midstream stocks should be strong this year, as capex as a group was declining and increased US production–in both oil AND gas–should increase their cash flow.  And the fact that PE groups are buying up assets should mean midstream stocks are cheap – but stock investors still don’t seem to be sold.  There’s no sector-wide breakout, though a few are trading near their 52-week highs. 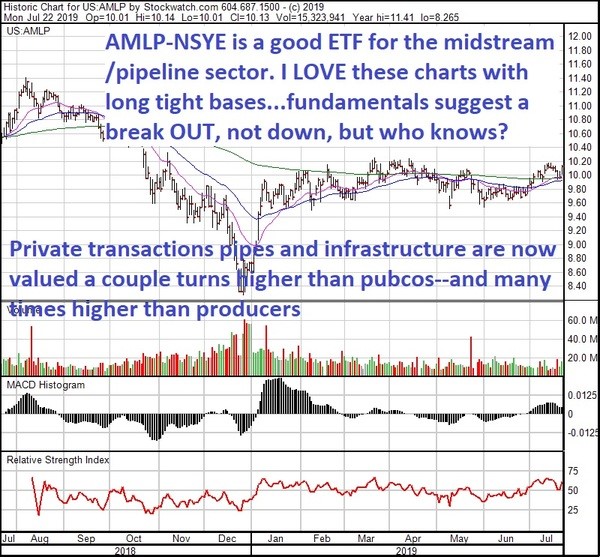 However, even if retail investors ignore midstream valuations, there is a hidden silver lining in this high-valuation for midstream assets for them–that’s all the pipe and processing centres that the juniors own – which may now be worth a lot of money in a market where there is no equity or debt! I’ll get to that later.

After doing some research, I found there’s clearly a different mindset in how private capital deals with midstream plays – that retail investors could never stomach.

I found that private capital is paying big premiums for these assets today because they intend to crank leverage levels up far in excess of what a public operator can.  That higher leverage provides a nice kick to IRRs.

How is the pipeline attractive to AIMCo example above – at current multiples?

Well, according to Bloomberg it turns out that AIMCo is going to leverage up the asset to an astronomical tune of 10X EBITDA.

The stock market wouldn’t touch a midstream business leveraged like that with a ten-foot pole.

But private capital can get away with it – in fact AIMco was able to issue debt to finance this incredibly leveraged deal at a rate of just 3.37%.

The investment merits of midstream equities are compelling.
They are cheap based on:

Debt-laden producers are benefitting most from these high valuations, like I showed above: they trade at 4x EBITDA but have huge assets inside them that are worth 14x.

Producers can sell these assets to do all kinds of things:
1. Reduce debt
2. Buy back stock
3. Buy another producer and sell the midstream assets to pay for it

Selling these assets helps the balance sheet but not the cash flow as they now have to pay processing fees to use that infrastructure.

It has to be frustrating for the management teams of producers….

For years they were told that they had to own their own infrastructure if they wanted to be rewarded with a decent valuation in the market. Control your own destiny!  Don’t be shut out of processing plants or pipelines – own them yourself!

Now they own their own infrastructure and the market is telling them that the smartest thing that they could do would be to sell their infrastructure because they aren’t rewarded for owning it.

That’s music to the ears of Private Equity.

EDITORS NOTE–I’m giving away one of my Top 2019 Stock Picks for FREE–next week.  Be ready for details in those emails.