Home Top Stories This Oil Major Jumped 50% In A Month: Here’s Why I Missed...

Do  you buy stocks based on charts, or based on fundamentals?  And how do you invest if the chart is good but research shows the company is not…or vice versa?

That was my dilemma last fall with Ecopetrol (EC-NYSE), the National Oil Company of Colombia.  In late October I loved the chart–it had a beautiful long tight base–but passed on the stock after putting a lot of time and research into the stock.  I saw it having no-to-low-growth–even at $80 oil!–and a short reserve life.

But oil kept on rocking up and look what the stock did! 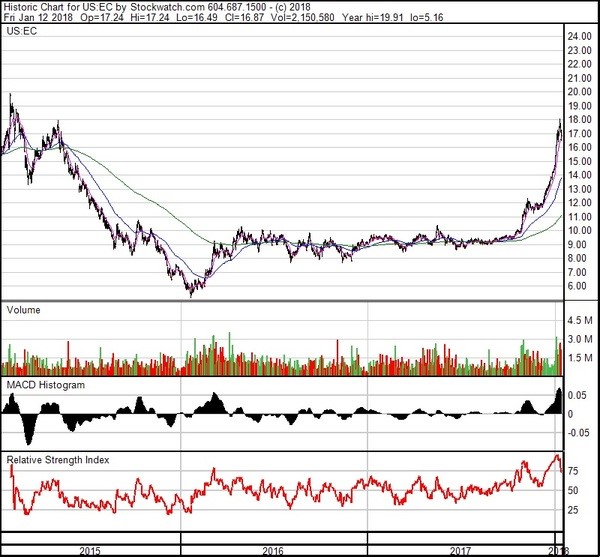 But then Brent crude–the international benchmark–went to $70.  And Ecopetrol’s chart went vertical…and has stayed there. That was more than a 50% move in weeks.  That’s what I hope for in juniors, not a big NOC like Ecopetrol!

I had this one in my sights, I aimed, put my finger on the trigger……but refused to pull.

Chartists look at that long tight base and know–the longer the base, the bigger the move.  Ecopetrol came to my attention via my newsletter colleague Donald Dony, who is one of the best Technical Analysts (TA) on stocks ever.  It had just hit a new high last October and he suggested Ecopetrol’s chart looked interesting. Donald has brought my attention to some great trades before, so I hit the books and started researching.  I’ve enclosed a brief precis of it below.

The good news was that, besides the chart, the balance sheet was in good shape.  It had a low multiple. So it had three positive attributes.

But you have to know who you are as an investor.  And I’m a growth investor; first, last, always.

And after a fat couple days of research, I didn’t think Ecopetrol was worth my money. I think the chart below puts it in perspective. 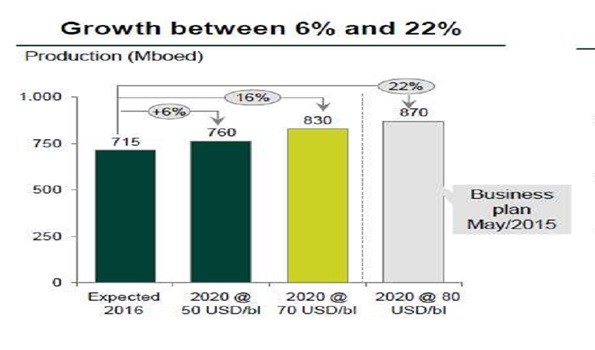 From 2016 to 2020 they can grow by 6% in total at $50 oil.  At $80 oil they can grow by 22% in total; not annually–in total!  And these are the targets they are proud to display…that’s underwhelming to say the least.  Imagine what some of the other companies I follow could do at $80 oil?  From a fundamental investment perspective Ecopetrol couldn’t hold a candle to other, better opportunities that were available elsewhere.

I thought investors could get some multiple expansion here if they operate well and oil does well.  You aren’t going to get any growth driving share price returns.  I thought…limited upside and plenty of risk.

I think fundamentally I was right…but that doesn’t matter.  All that matters is the tape. And the tape said I should have paid a lot more attention to the chart…or at least kept the stock on my screen after November. It is too late now.

Created in 1951, Ecopetrol is a publicly-owned Colombian company that operates in the production, refining and transportation of oil and gas, as well in petrochemical activities.

Ecopetrol produces more than 60 percent of Colombia’s oil and has presence in Brazil, Peru and the United States and Mexico. Ecopetrol’s producing fields are located in central, southern, eastern and northern Colombia.

It has Colombia’s two largest refineries (Barrancabermeja and Cartagena) and three ports for the export and import of fuels and crudes on both coasts (Coveñas and Cartagena on the Caribbean Coast, and Tumaco on the Pacific Coast).

It also owns most of the country’s oil pipelines and multi-purpose pipelines, which connect production systems with the major consumption centers and marine terminals.

This company is the Colombian oil industry.

The 800 pound gorilla that overhangs Ecopetrol’s valuation is the company’s extremely limited reserve life.  Ecopetrol is running out of oil and gas, especially oil. 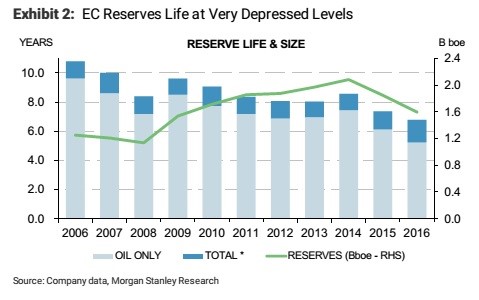 Ecopetrol’s proved reserve life is just 6.1 years for oil & gas combined and only 4.8 years for oil.  This isn’t just a critical issue facing the company’s E&P operation but also the sustainability of its midstream segment (35% of EBITDA).

It is mostly Ecopetrol’s oil and gas that flows through its midstream pipelines. 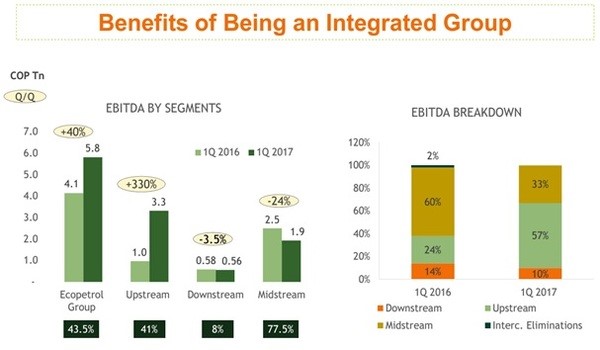 One of my issues was that Ecopetrol wouldn’t be able to grow reserves to a level to sustain company operations.  There have been no major oil discoveries in Colombia since the Camon-Limones field in 1983 and on top of this the Andean nation only has proven reserve of 2.4 billion barrels.

This was the reason behind the decision for Ecopetrol to assume full control of the Rubiales field in June of 2016, stripping Pacific Exploration and Production of its 43% interest. The move boosted Ecopetrol’s production by roughly 60,000 barrels daily and will see its proven reserves grow.

Since 2013, the Ecopetrol Group’s transport business has been led by Cenit, a subsidiary company.

One of the largest investments made by Ecopetrol has been in expanding and upgrading its refining business. This includes upgrading the aging Cartagena refinery–now complete–and has entered testing phase which will run until 2017.  This should increase production volumes a lot, and increase revenue and profit margins. Utilization rates at the Barrancabermeja refinery have also increased.

Nevertheless, refining margins are falling despite the reduction in operating costs predominantly because of higher input costs.

Overall while Ecopetrol’s downstream business has helped it to weather the prolonged slump in crude, refining tends to be a marginal business and not particularly profitable during times of higher oil prices for marginal operations such as Ecopetrol’s.

In December, the country’s refining record was reached, with a load of 380 Kbcd.

In 2016 Ecopetrol changed the majority of management to implement important changes for the company. 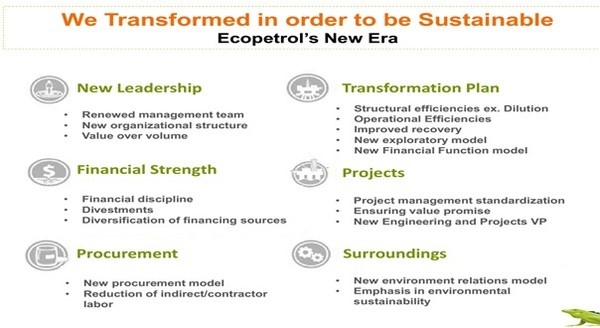 Priority #1 for the new management team is to stabilize and then grow production and reserves.

The plan laid out by the new management team is to grow production by between 6-22% by 2020.  How much growth depends on what the price of oil is.

At $50 oil we are talking about 6% growth.  That isn’t 6% annualized, that is 6% in total.  The high target point is 22% total growth which can be achieved at $80 oil.  Not all that impressive when you consider what some North American shale producers could do with $80 oil.

The specific plan to achieve this growth comes mainly from increasing recoveries at existing properties.  The company breaks it down as follows: 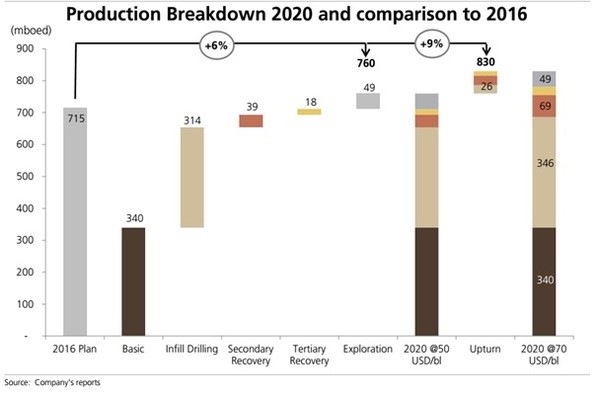 The good news is that despite the lack of major oil discoveries in Colombia and the country’s declining reserves, it has been estimated that only 30% of Colombia has been explored for oil.

This along with it being estimated that Colombia has oil potential of 47 billion barrels or more, indicates that there is the potential for considerable exploration upside (like what GPRK-NYSE and PXT-TSX have been able to do at Tigana-Jacana in the Llanos Basin).

Ecopetrol has recognized the company’s main problem is with its short reserve life and struggling production.

Ecopetrol has doubled its spending on exploration and production in 2017. 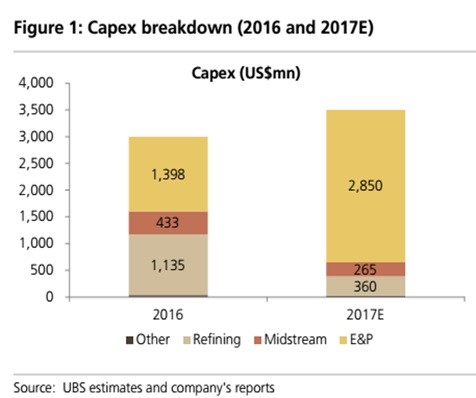 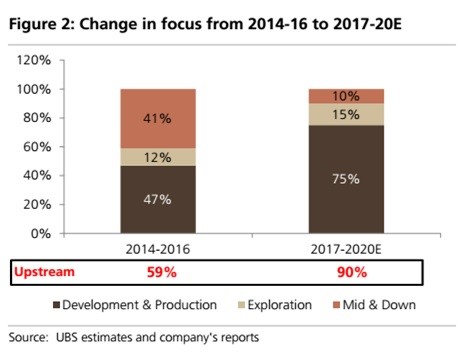 Another issue facing Ecopetrol are the high operational costs associated with operating in Colombia.

Overall, upstream E&P cash costs are around 10% higher than for North America and 30% higher than U.S. light-tight oil production. Ecopetrol has been working hard to reduce its upstream costs.

New management is putting effort in the right areas; in 2016, the company realized improvements, such as:

One potential solution to Ecopetrol’s (and Colombia’s) lack-of-onshore-oil problem could be (unconventional) shale exploration. According to recent statements by the company’s CEO, Mr. Juan Carlos Echeverry, shale formations in the Magdalena Medio basin could boost production by 200k-300k bpd (28%-42% of total).  They would bring partners for that–a boon for intermediate sized North American E&Ps.

Separately, Ecopetrol has high expectations of entry into Mexico after winning two blocks in June to explore and produce hydrocarbons in shallow water in partnership with Petronas and Pemex, he said.   They already have a discovery in the Caribbean Sea with Anadarko 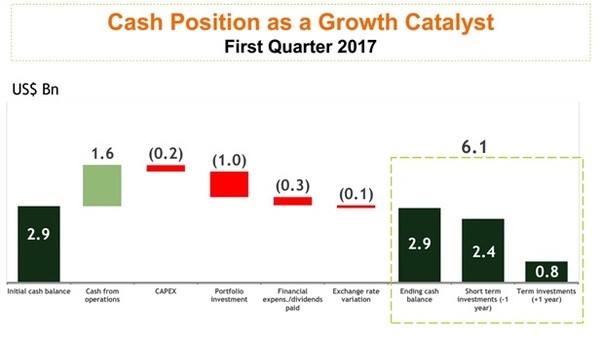 Debt to EBITDA is a solid 1.5 times, so no balance sheet concerns.

The real concern is Ecopetrol’s low oil reserve lifetime which is going to make maintaining production a challenge.  If production declines that worsens the balance sheet.

Ecopetrol is going to have to work very hard to maintain production let alone grow it.  We have seen that the company’s optimistic oil price scenario ($80 Brent) sees the company only growing production by 22% between 2016 and 2020.

And that is if the company hits its numbers.

Back in October 2017, before the oil price REALLY moved up, I thought Ecopetrol’s cheap valuation of 4.3 times cash flow was warranted.  No growth, nothing to get excited about here–except leverage to $68 Brent.  And that’s where the chart took off.

The only upside I see from here–because I don’t see oil going a lot higher from this price–is if the company hits on a huge exploration success or really gets the shale oil side of things rolling.