Investors are nervous about US oil supply…yet I see one of the most bullish charts in this area.

The charts below show the number of days of crude oil supply that the US has in storage.  This tells us how long it would take–at the current rate of consumption–to use up all that crude.

At the start of September U.S. storage had 31 days of crude in storage.  What has happened since has caught a lot of people off guard.

In less than four months U.S. crude storage has shrunk from over 31 to only 24 days of coverage. 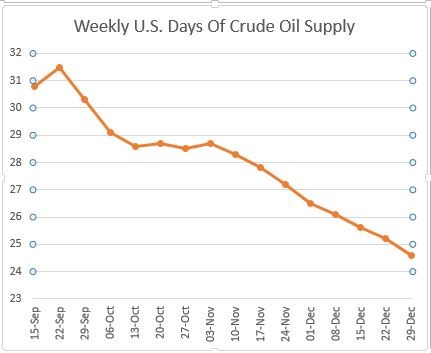 The obvious conclusion to draw from this chart is–that the U.S. oil market was significantly undersupplied in the last four months of 2017.

Now I know what you are thinking, because I know you’re smart.

I wondered the same thing so I sent my young underpaid researcher to dig into this data–I wanted to know the change in U.S. days of crude oil supply over the same time period for at least the last decade.

I figured that way I could determine just how bullish this chart really is.

He (as usual) outperformed my expectations…he went back to 2002 and put his results into the chart below.
Does anything stand out to you? 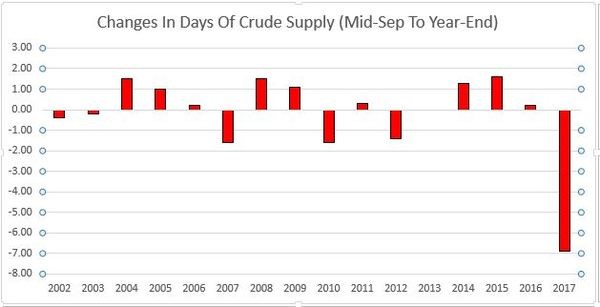 Not only is this decline in days of crude oil supply not a regular seasonal thing, but the size of 2017’s decline is also extremely abnormal.

In the analysis of the mid-September to December 31 time period for the past 15 years we have had:

The average change in days of U.S. crude oil supply over this time period before 2017 is an increase of 0.2 days.

Simply having a decline in days of supply is a bit unusual.

There had never been a decrease of more than 1.6 days until this year.

2017’s decrease in U.S. days of crude oil supply of 6.9 days is jolting data point, perhaps the most bullish piece of oil data that I can recall ever seeing.

So what did I do with that information?

While the price of oil has been moving, the stock prices of oil producers have barely budged.  The sector was left for dead long ago.

I’m willing to take a Big Swing at these stocks–especially the best-of-breed ones that have barely moved up in price.

Right now, it’s like swinging at a fastball right over the middle of the plate.

I can supply you with that big fat pitch that you want.  There is one oil producer that I’ve told my subscribers that they have to own.

This company ticks every box that I want covered:

This company is an absolute Free-Cash-Flow-Machine at these oil prices. The horn has sounded.  The game is on.  I am lobbing this pitch over the middle of the plate–click HERE to hit it.
-Keith Schaefer

Next post: There Is One Chance To Secure Enough Lithium Supply – That Window Is Open Now

Previous post: This Oil Major Jumped 50% In A Month: Here’s Why I Missed It