Editors Note: I’ve been following Tom McClellan for years. He has an uncanny ability to find intriguing economic relationships–ones you would never expect–through charting.  His recent article on oil was so direct, so simple I asked him to share it with you today.  I’ve been a subscriber for a couple years now, and you can find a link to Tom’s service at the bottom of this article. 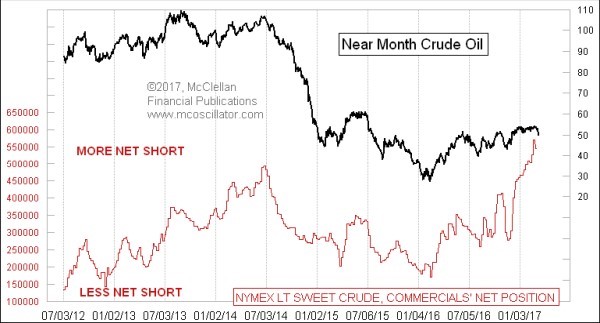 March 10, 2017
There is a giant wall of short positions held by the smart-money “commercial” traders in crude oil futures, and it is going to lead oil prices to come crashing down.

Each week, the CFTC reports on the numbers of long and short positions held by futures traders.  They are broken down into 3 separate groups:

Commercials – Those engaged in the business related to that commodity.  They are the big money, and thus presumably the smart money.  Think Cargill for grains, or Goldman Sachs for financial futures.

Non-Reportables – Those whose positions are too small in number for the CFTC to bother tabulating them individually.
This week shows the commercial traders net short position, expressed in numbers of contracts.  They just reached an all-time (since 1986) record for the number of contracts that they are net short, i.e. short positions minus longs.  Every futures contract is simultaneously a long and a short position, with the two sides of that contract held by different parties.  The short side is the one that has to deliver the product, and the long side wants to take delivery, or at least that’s the design.  Speculators also play in the futures markets, never intending to take or make delivery.

In the crude oil market, the commercial traders are often the producers, using futures markets for their original intended purpose, which is to be able to lock in prices now for sales of future production.  So the direct message of seeing the commercial traders reach an all-time net short position is that the smart producers think that recent prices have been a great deal to lock in for their future production.  If oil prices were going to rise, then locking in now would not be a great deal.  But if oil prices are about to fall, then smart traders would want to lock in prices before that happens.  This seems to explain what we have just seen.  And understand that the speculators, large and small, have taken the opposite site of that big imbalance in positions.

The last time that the commercial traders came even close to this big of a net short position was back in June 2014, just before crude oil prices were cut in half.  I cannot forecast the magnitude of the coming move down, but the message here is that it should be substantial.
The notion of a down move for oil prices is confirmed by the spread between near and far month futures prices, known as “contango”. 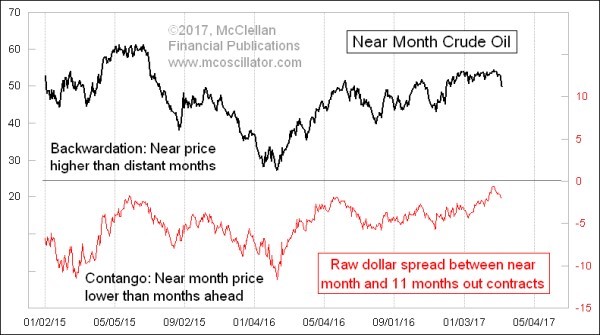 That spread recently narrowed to its smallest point in over 2 years, a sign that near month crude oil prices were topping.  When there is a big contango, then a trader could buy cheap oil in the spot market, rent a place to store it, and sell a more expensive futures contract.  Then all he has to do is wait a few months to deliver at that higher price.  As long as the spread is big enough to cover the cost of storage, then there is a lot of money to be made.

But when contango gets really small, up close to zero, then the cost of storage eats up all of the profit margin from that game, and traders look to dump that supply on the market and stop paying rent.  This is the sort of condition we are entering now, with a glut of oil coming onto the spot market.

The point is that prices for crude oil are likely to fall for a while, and we will probably know that they are done falling only when we see the commercial traders covering their shorts in a big way.

Get more information about Tom McClellan’s subscription publications at https://www.mcoscillator.com/subscriptions/signup.php .  You can also sign up on his Home page for a free weekly Chart In Focus series of articles like this one.”