Psychological fears of an oil glut are have caused oil prices to drop from $55-$48.  But there is some fundamental  economic factors that suggest this price drop will be short lived. 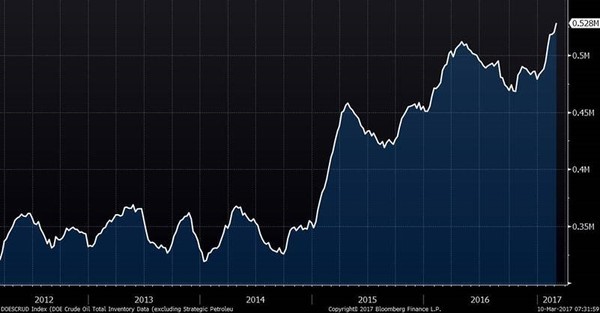 But over the past few weeks, unplanned and accelerated refinery maintenance (meaning they go offline) has created a one-two punch – resulting in lower refinery throughput while crude oil imports have continued at a (higher) rate that would really be meant for higher refinery utilization than we’ve seen this year.  That’s because imports are generally scheduled weeks to months in advance.

The ‘excess’ U.S. crude imports (versus refinery utilization) were most likely accidental and there is one very encouraging sign that reduced imports will correct the imbalance shortly: benchmark VLCC charter rates for Arabian Gulf to Gulf of Mexico voyages have plunged from $27,000/day at the end of 2016 to just $920/day today – as the following chart displays: 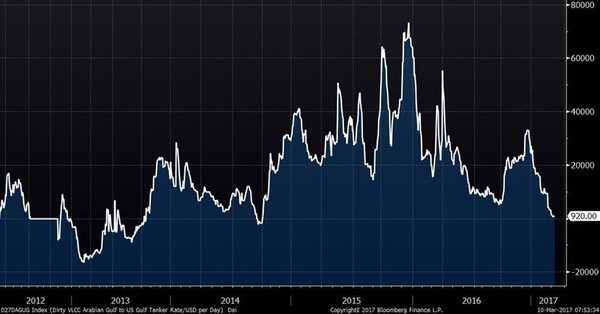 That screams—lack of demand.  And the Market is very fixated on the weekly waterborne import number the EIA puts out every Wednesday morning at 1030 am EST.

The conclusion is that imports were temporarily (and accidentally) elevated and could decline meaningfully over the next two months (ultimately averaging roughly 48% of refinery throughput in 1H17), and crude oil prices will bounce back meaningfully with lower US imports.