Notice a pattern at all?

Ever wonder why management of senior oil companies don’t notice this same pattern?  How can that be so when the long history of this business is nothing but booms and busts?

In a moment I’m going to compare for you two companies of a similar size.  One is another typical victim of this crash.  The other is going to come out the other side stronger because of it.

Why more companies weren’t in a position to do the latter….I do not fully understand.

The fact that oil crashed shouldn’t have been a surprise to anyone.  We have 150 plus years of oil production history that tells us that this is a highly cyclical business. 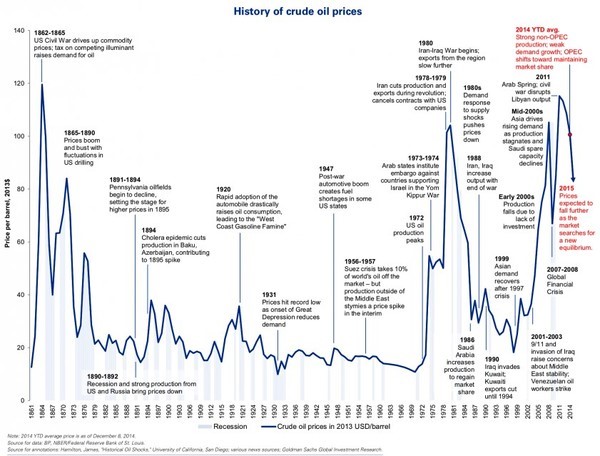 The fact that we were five plus years into a bullish oil run should have had every energy executive worth his salt preparing for the next instance of the bottom falling out.

I’m no rocket scientist, but even my teenagers think I have a bit of common sense.

Also at that time I told my subscribers that with oil at $100 per barrel I certainly could envision a lot of downside.

So I greatly reduced my oil exposure and found other ways to make money from energy.

My decision was based simply on common sense.  That simple common sense allowed my Oil and Gas Investments Bulletin portfolio continue climbing through 2014, 2015 and this year despite the complete carnage all around me.

If a simple thinker like myself could figure out that the time to build an ark is before it rains…..why couldn’t the majority of the people running oil producers?

Rather than be a victim of the cyclicality I don’t understand why more companies don’t do what I do which is try to exploit it. 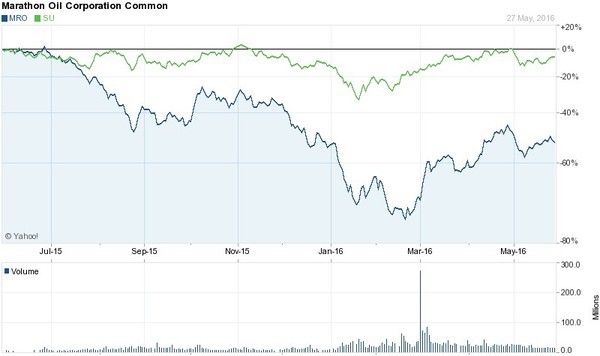 A picture tells a thousand words and the stock chart above definitely does too.

Since the middle of 2015 when it became clear that the oil crash wasn’t going to be a short one Suncor’s (TSX/NYSE:SU) share price has held strong, while Marathon Oil’s (NYSE:MRO) has taken a beating.

Suncor has distinguished itself in the eyes of investors over the past year while Marathon has been forced into an ultra-defensive position where it is just trying to survive. 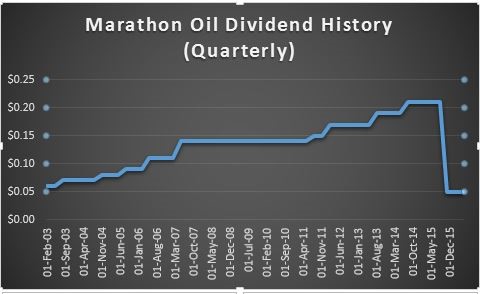 There have been no dividend cuts from Suncor despite oil prices at one point losing almost 75% from the 2014 peak.  In fact these cheeky monkeys at Suncor actually increased their dividend by a penny per quarter in September 2015. 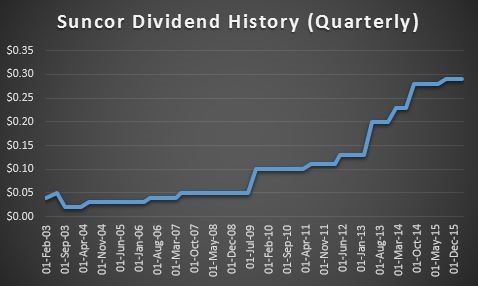 Doing that while oil has fallen as far as it has is a tremendous accomplishment.

We are now 18 months plus into this oil crash.  Cash flows are crimped, balance sheets strained and the bankers no longer willing to lend.

To say that this is a buyer’s market for oil and gas properties is an understatement of epic proportions.

You can likely imagine which side of buying and selling these two companies are on.

Marathon’s balance sheet is in rough shape.   Over the past year the company has sold $1.3 billion of assets into this buyer’s market.

In the largest transaction Marathon sold all of its Wyoming assets for $870 million. The properties consisted only of very low waterflood developments in the Big Horn and Wind River basins which averaged 16,500 barrels per day in first quarter 2016.  That is only $52,727 per flowing barrel which is likely less than half what those assets would have gone for in 2014.

Marathon is selling at the worst possible time.  The company is a victim of low oil prices.  It is too bad they don’t have the $1.5 billion in cash that they spent buying back shares at $35 when oil prices are higher.

Suncor on the other hand is not a victim.  The management group of Suncor has positioned the company to take advantage this opportunity. 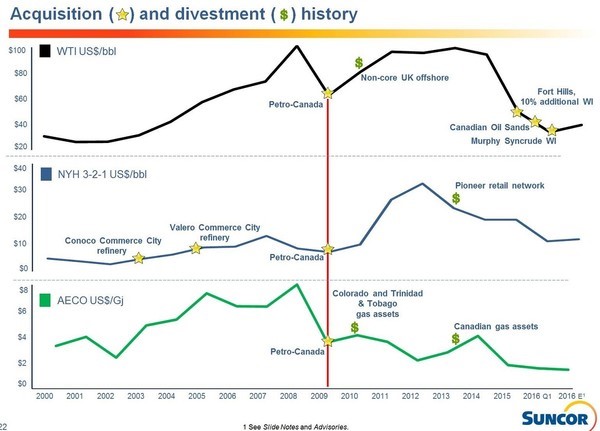 Over the past several months Suncor has been able to turn its 12% interest in Syncrude into a majority 53.74% interest by acquiring all of Syncrude pure-play Canadian Oil Sands as well as Murphy Oil’s small piece of Syncrude.

On top of that Suncor has tucked in another 10% interest in its Fort Hills oil sands project.

Comparing these Syncrude transactions by Suncor looks like a major steal compared to what Sinopec (NYSE:SHI) paid for Conoco Phillips (NYSE:COP) Syncrude interest in 2010.

You might think that Suncor being in a financial position that allows it to be an acquirer is luck.   I doubt it considering that the last time Suncor pounced on a major asset was when oil prices last crashed.  In 2009 Suncor made a major acquisition acquiring Petro-Canada.

When commodity prices crash, commodity producer cash flows are going to do the same.  It makes a lot of sense to adjust dividend policy accordingly.

As a shareholder I can handle that.

But it gets worse when following Marathon Oil.

In 2013 and 2014 Marathon’s stock price spent most of the time above $35 and during this time the company repurchased $1.5 billion worth of shares.  In total Marathon repurchased roughly 43 million shares.

That is $1.5 billion dollars spent at share prices that are three times the current level.

In 2015 Marathon shut down its share repurchase plan entirely.  Then came the brutal kick in the stomach for shareholders.

Let me recap those numbers…

The net impact of this is that Marathon is out of pocket $400 million and has increased its share count by 102 million (on a 770 million outstanding share base).

Suncor meanwhile has reduced its share repurchasing since oil dropped to match its reduced cash flows. It hasn’t had any sort of a share issuance to raise cash so Suncor shareholders haven’t experienced the ugly dilution that Marathon shareholders have seen.

Build the Ark Before It Rains

You have to wonder what so many of the management teams in this industry were thinking when oil was at $100 per barrel.

Yes, everything is easy with the benefit of hindsight but the fact that oil prices would crash again was never a matter of if.  It was just a matter of when.

Instead of hitting the accelerator on spending when oil prices were high companies should have been making their balance sheets bulletproof.  Instead so many of them go to work on their balance sheets after the crash has happened when selling assets and issuing equity is painfully dilutive.

EDITORS NOTE–There’s one junior producer out there who has made an amazing deal at the bottom of the market–access to most of the ground surrounding an 850 million barrel field–near-virgin territory, with no work done on this prolific ground for 50 years…I think it will The Play of The Year…CLICK HERE for the details…