The $2 Trillion Energy Market That Is Just Ramping Up

I want to show you one of the most powerful charts I see in energy right now.

This chart doesn’t show where stocks are going, or where commodities are going.

It shows how energy is being used, and will be used in the coming years—and what is driving that growth.

And it’s so easy to understand—it’s called The Internet of Things, or IoT for short.

It’s where every appliance, every car part, every monitor…has a small computer chip in it that tells both the owner/user and the manufacturer how it’s doing, where it is, and transmits any data it’s programmed to.

It’s impossible to imagine the applications—and the energy savings—all this information—from every industry in the world—will generate.

But this isn’t a potential future market—the multi-TRILLION dollar rollout is happening now.

One of the first big “apps” is city streetlights being outfitted with energy saving LEDs, and having the computer chip tell the light when nobody is around—and lower the luminescence.

Cities are seeing an immediate 30-50% savings in electricity bills—which are often more than half of their overall electricity use.

Here’s a chart that help you get the picture: 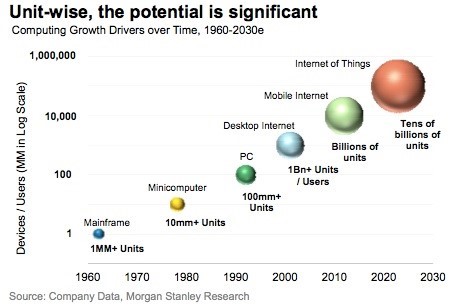 This chart says there will be tens of billions of units.

I think there will be more. Think of every towel in every hotel with an RFID tag/computer chip.  Theft goes to zero.

Think of every  parking meter in every city with a computer chip that can tell a server if that stall is empty right now.  The time savings, and the efficiency savings, will be incredible.

That’s why there is a spending spree happening in the IoT space by Big Technology.  I know.  My subscribers and I have already had one of our IoT stocks bought out for a 90% premium—that’s a near-double in one day.

I’ve found a stock with even more potential than that though—with big fat hardware margins and incredibly profitable and growing software margins.

Because this company has it all, I don’t expect them to be around long.   Their sales backlog is growing each quarter.

The growth here is stunning.  Investors are winning at energy right now in this space—with this stock.  Get the name and symbol—RIGHT HERE.

Previous post: The Next Big Fight in Oil If Prices Rise