Home Oil The Next Big Fight in Oil If Prices Rise

As the oil price fell from $105/barrel in 2014 to $26/barrel in 2016, producers, service companies and banks/lenders worked very co-operatively to keep as many people employed and as much oil flowing as possible.

It has been a remarkably co-operative endeavour for the global energy industry.

I expect that to change to become a lot more cut-throat between these players as the oil price rises.  There will be intense competition between the producers and service sector for every extra dollar that any increase in the oil price brings back into the energy complex.

Paul Kibsgaard, CEO of  Schlumberger (NYSE:SLB) sent a Big Warning to that effect during a speech at the Scotia Howard Weil Conference in New Orleans recently.

Schlumberger is the world’s largest oilfield service firm with 105,000 employees and operations in more countries than I can name.  These guys have a lot of fingers on the pulse of what is really going on in the industry.

Kibsgaard notes that the oil producers are now doing the same three things they have done in every prior oil crash since the 1970s.

The Third Factor is the producers across the industry simultaneously squeezing the service industry for price concessions.  This is a “my pain is your pain” kind of thing.

Kibsgaard believes that it is this squeezing of the service industry that has created almost all of the so-called “efficiency gains” that the producers have touted. 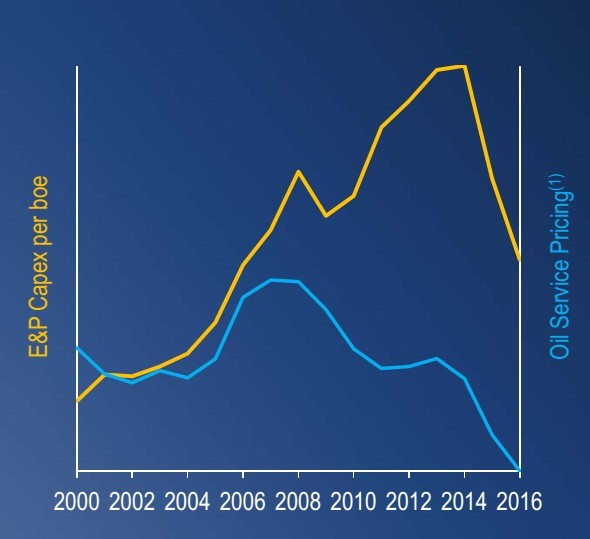 The producers would have us believe that they have gotten that much better at drilling wells faster and making them more productive.  You know, the graphs that look like this: 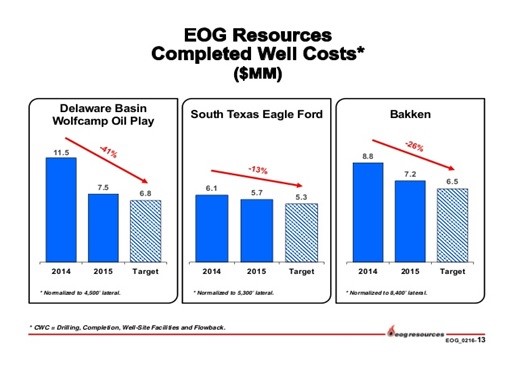 Kibsgaard believes that there is some truth in that, but most “efficiencies” are really service cost reductions.

Kibsgaard’s view is that as soon as activity levels in the industry pick up those pricing levels are headed higher.  As the service costs rise, so too will the costs of drilling and completing a shale well.

The break-even costs being promoted by these companies might be true today, but as soon as activity heats up they are headed higher.

What he’s saying is that investors should not expect the cash flows of oil producers to rocket up along with any increase in oil prices—because the service sector will get be getting a good chunk of that increased cash flow.

Let me share two conversations I very recently had on costs with Canadian management teams, one from the service sector and one from a producer (I host my own conference calls with management teams on a regular basis and provide transcripts to subscribers).

From the service company executive:

“I think when the (oil) market comes back it’s likely not realistic…that the current service costs that the operators are enjoying—and rightfully so—and telling investors how they lowered drilling and completion costs and lowered finding and development costs.

It’s not what people think and it’s not guys in the field all over the place making $300,000 working half the year. It’s guys making decent wages but they have skills and experience that justifies what they are paid…I don’t think there is too much more room to go down.”

“I find in Western Canada we, as industry, haven’t made the adjustments there that are necessary.  There is a lot of room to go in those service costs. I know those guys won’t tell you but there is a lot of fat there that needs to be trimmed yet. I’ve had discussions with Presidents of those companies that they need to change.

“For example, I get on a plane and go to Toronto and its 20% full of oil field workers. How is it at $30 oil that we can afford to fly people back and forth to Eastern Canada? So there is one example and I can go on with about 8 or 10 but I’d still be talking here at lunch if I rattled them all off.”

As an aside, Kibsgaard had one other major point in his talk–that the industry has not found any efficient new way to get oil out of the ground cheaply this century.  Shale didn’t work because of efficiencies he says–it worked because the industry threw hundreds of billions of low cost debt at it to make it work.

The yellow line in the slide below from Kibsgaard’s presentation shows the massive amount of dollars that were thrown at oil and gas development in recent years.  The increase in spending is incredible. 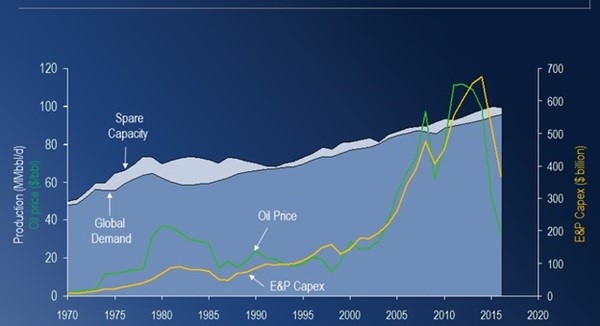 The slide shows capex spending going from $100 billion in the year 2000 to nearly $700 billion in 2014.    Yet with a sevenfold increase in spending the rate of global production growth really hasn’t strayed from its gentle long term rise.

Very high (and for a while stable) oil prices combined with incredibly low interest rates funded all of this spending.  Yes the innovation was important, but without that incredible surge in spending the shale boom would not have turned global oil markets upside-down.

Money made it happen.  Lots of money.

And as Kibsgaard notes in his presentation:
“The fact remains that the industry’s technical and financial performance was already challenged with oil prices at $100/bbl, as seen by the fading cash flow and profitability of both the IOCs and independents in recent years”

The point of Kibsgaard’s presentation was to say that the industry does not have a cost-effective solution to develop increasingly complex hydrocarbon resources.

EDITORS NOTE–I do own some oil producers, but my biggest position is in an off-the-beaten-track energy stock that pays me a steady–and increasing–dividend. I make $3500 a month off this beauty–the symbol and name of this stock is right HERE.