A Texas court case this Friday, February 26 will set a precedent that will either see all US pipeline and “midstream” stocks have a monster rally—or get crushed (even more!).

That’s when Crestwood Partners (CEQP-NYSE) will defend its fee structure in transporting the natural gas of defunct Quicksilver (formerly KWK-NYSE) through bankruptcy.

Quicksilver has a buyer for the company—on the condition that its pipeline fee structure with Crestwood be thrown out.  There is also a second buyer for Quicksilver that has no stipulation—but it’s a lower bid.

There is tens of billions of market cap at stake here for investors—mostly retail investors who bought these new pipeline companies called MLPs—Master Limited Partnerships.  These companies have high debt yet pay out very high dividends.

I’ll explain the (relatively simple) details of the case below, but the outcome is binary—if Crestwood wins, the Market would take that to mean that the guaranteed “take-or-pay” revenue streams for pipeline companies are good as gold, and will get paid through bankruptcy.

But if Quicksilver wins, the Market will not trust any revenue streams coming from highly indebted E&Ps to pipeline companies.  I expect those revenues will be discounted to near zero as soon as the court issues its judgment—though there will likely be appeals.

Investors will find this a powerful and drama-filled story for several reasons:

1) These stocks represent the Ultimate Betrayal for millions of retail investors in 2015.  The Mom and Pop investors who own these MLPs religiously believed these dividend payments didn’t have exposure to commodity prices; that the pipeline companies had guaranteed “take-or-pay” provisions from the producers, with minimum volume commitments (MVCs).  It turns out they were wrong.  Example—Crestwood’s revenue dropped 40%, or $400 million, from Q3 2014 to Q3 2015.

2) This court case is happening just as investors like Warren Buffett are finding value in MLPs—where stock prices have declined 50-90%, just like producers.  This has created some incredible yields for investors—Crestwood is now paying a 66% yield—sixty six percent!  Other stocks with 25-35% yield are now common in this space.

3) MLPs are mostly owned by retail investors—Mom and Pop.  So this isn’t big nameless and powerful hedge funds losing money…this is your neighbor.

It’s a powerful lesson for everyone in the Market—where investors in MLPs are now questioning everything that they once believed to be true about this seemingly invulnerable sector.  Everybody wanted to believe in take-or-pay, and in little to no exposure to commodity pricing.

But as quarterly results came in through 2015 and revenue started to decline, investors got nervous.  Many of these MLPs have high debt, building out thousands of miles of new pipe (Canada can only stare across the border in envy and bewilderment on that).

As the Market realized US oil production would have to contract to see the oil price recover, MLP prices fell hard.  Look what happened to one of the biggest and best—Kinder Morgan (KMI-NYSE): 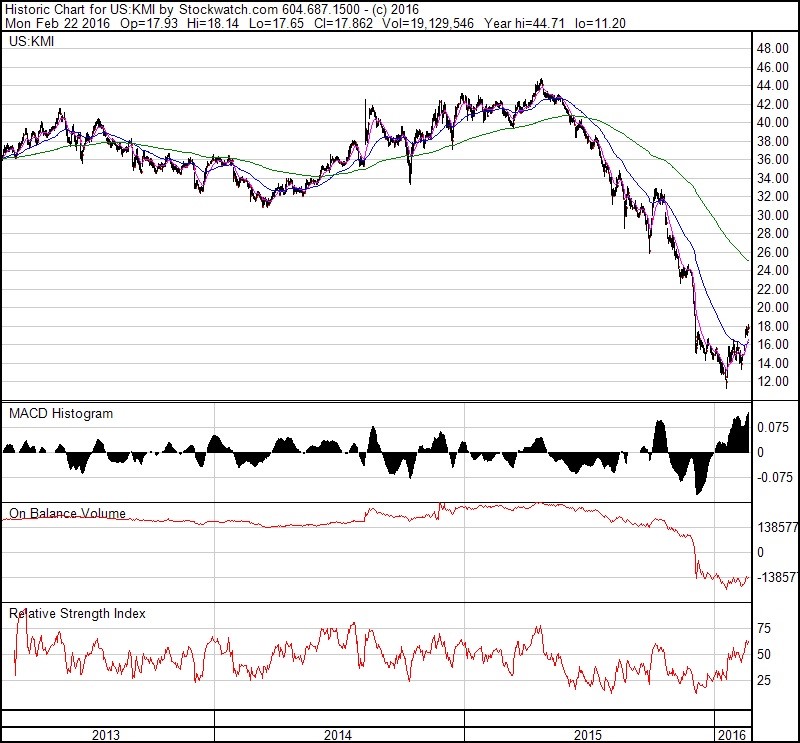 Here’s the story of how investors got into this mess—and how they might get saved by the gavel.

If It Seems Too Good To Be True….

It wasn’t that long ago that the MLP sector was the darling of investors.

It had everything going for it.

Surging U.S. oil and gas production created a huge need for the oil and gas infrastructure that the MLPs provide.

Thanks to ZIRP (Zero Interest Rate Policies, MLPs could use almost free debt to build out that infrastructure.

This created extremely wide margins between revenue and cost.

As a tax-advantaged “pass-through” entity, income earned by the MLPs are not taxed at the corporate level.

This created bigger dividends for the shareholders (who then have to pay taxes on those dividends).

And then the kicker—the MLPs were able to virtually guarantee secure dividends to investors because revenues were based on fixed fee contracts and have almost no impact by commodity prices.

This removed the risk.

Growth, wide margins, tax advantaged and low risk.  What wasn’t to like?

Well seemingly nothing on the surface, but investors didn’t fully understand the rules of the game.

In a zero interest rate world investors fell in love with the secure dividends provided by the MLPs.

The yield on the MLPs was attractive, but the perceived security of the payments the real selling point.

The security of the dividend was tied to the specifics of the contracts that the MLPs entered into with the oil and gas producers using the MLP gathering systems (pipelines).

The fixed fee nature of the contracts meant that the MLPs were believed to function much like toll roads. Because the fees were fixed, the revenue allegedly did not fluctuate with the price of the commodity that their customers produced.

And the contracts were even better than that.  Known as “take-or-pay” contracts, the agreement was that the producers would pay the MLPs even if they didn’t ship any oil or gas through the pipeline.

The producers were willing to agree to those “take-or-pay” terms to ensure that they had space reserved in the pipeline for their production.

Having production but no means to get it to market was not a risk a producer can take.

With both volume and price seemingly locked in, the revenues, cash flows and dividends of these MLPs looked very secure.

That meant these stocks became VERY highly valued between 2011-2014; MLP stocks did very well for a time.

As the oil price started crashing in 2014 and into 2015 the stock prices of E&P companies cratered along with it.  Initially the stock prices of the MLPs held up very well.  Investors held on comfortably believing those fixed fee “take-or-pay” contracts protected the cash flow that the MLPs could generate.

That began to change in the summer of 2015 when the price of oil went for its second big leg down.  Investors became concerned.

The very slow descent of the Alerian MLP ETF (NYSE:AMLP) began to pick up pace—see the stock chart below: 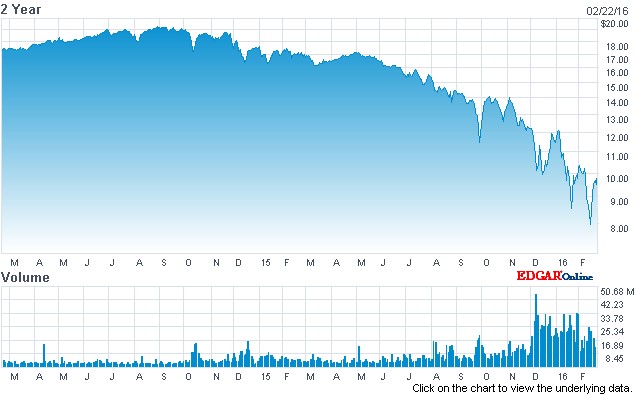 Chesapeake represents a huge amount of revenue to many MLPs and the idea of it heading into bankruptcy started to raise questions about what would then happen to those rock solid contracts.

MLP stock prices crashed and yields in the MLP sector went through the roof.

A quick skim of the highest yielding stocks reveals multiple MLPs now yielding over 30% and Crestwood hitting 66% yield in early February.  The low-risk appeal of the MLP sector was gone.

The fixed fee contracts are real.  And so are the “take-or-pay” agreements.

The complication is what happens when the producer on the other side of that agreement declares bankruptcy.

Does bankruptcy negate the contract?

If you ask a lawyer working for an MLP the answer will be no.

The MLP lawyer will tell you that these contracts are to be treated in the same manner as a property interest.   What that means is that the terms of the contract are passed on from the prior owner of the property to the new owner.

The trustee lawyers for the creditors that have taken over bankrupt E&P firms disagree with the “run with the land” assertion about these contracts. These lawyers have presented the argument that the contracts with the MLPs can be broken under Section 365 of the U.S. bankruptcy code.

The two sides are obviously very motivated to argue their position.  The MLPs want to keep their revenues intact and the bankruptcy lawyers want to help the creditors they represent recover as much as possible.

The crazy thing is that nobody knows for sure which side of the issue is correct.  This specific issue has never been litigated to conclusion so there is no clear-cut precedent.

We will soon get some clarity one way or the other with the Crestwood-Quicksilver case.

But the MLP and midstream industry has already had one bit of bad news:

A subsidiary of Cheniere Energy (NYSE:LNG) named Nordheim Eagle Ford Gathering is also in court, this time with the bankrupt producer Sabine Oil and Gas.  Nordheim argues that its contract is sound while Sabine believes that it can get out of the contract under bankruptcy.

In a February 2 hearing on the Sabine/Nordheim case the judge presiding expressed skepticism that the contracts could survive the Chapter 11 bankruptcy.  This undoubtedly sent shudders through many an MLP boardroom.

The precedent set in these two cases will impact many other bankruptcy proceedings that are sure to follow in 2016.  It will also determine whether the MLP sector is a tremendous bargain today or in for more pain in the months ahead.

EDITORS NOTE–my biggest long position profits as energy prices drift lower.  Maybe that’s why it has already increased its dividend in 2016.  How many energy companies can say that?  And you know what happens when dividends increase–stocks go up.  Tired of watching your stocks go down? Get the name and symbol RIGHT HERE