Iran has been very vocal about ramping up oil production by one million barrels a day. That’s a real threat to a global market already oversupplied.

The Iranians are also talking a big game about increasing natural gas production.

In two years Iran believes that it will take natural gas production in its South Pars field from the 14.8 bcf/day currently being produced to 26.5 bcf/day.

That is a huge number, even in a bull market.  But with the first LNG export leaving the US this month, and the US$54 billion Gorgon LNG facility in Australia about to come online—you have to wonder who will buy that gas.

But is that growth even possible for Iran?

Robin Mills is doubtful.  Mills is CEO of Qamar Energy, a Dubai-based consultancy that advises clients on strategic, commercial and business opportunities in Middle East oil and gas.

“Iran has no LNG export facilities today,” he explained to me in an email exchange.  “The Iran LNG plant could be completed perhaps within 3 years (optimistically); other facilities would take much longer.”

“Iran will probably export by pipeline to Oman and Pakistan, as well as expanding its current exports to Turkey, and starting exports to Iraq,” he continued.  “Other pipeline exports, like India or Europe, are more speculative. This will mean more competition for LNG supplies to those countries, and potentially competition for Russian gas into the shrinking European market.

“But Iran also has to balance all these gas export plans against domestic needs for power, industry/petrochemicals and EOR (Enhanced Oil Recovery). It has the gas resources to do everything, but only if it really steps up international investment into new fields.”

And it was only two years ago when the head of Iran’s Ministry of Petroleum Research Centre, Hamid Katouzian, was quoted as saying Iran will be the largest importer of natural gas in the world.  So could this latest Iranian claim be exaggerated?

To grow production by some 79% or 11.7 bcf/d is a big deal.  Some context on how significant 11.7 bcf/day is might help.  Consider the following:

The amount Iran is talking about is big and the time frame it is planning to do it in is very short.

The Biggest Conventional Natural Gas Field Of Them All

This field is on either side of the Iran/Qatar border in the Persian Gulf. In Qatar they call their portion of the field the North Dome.

The picture below shows just how massive the South Pars/North Dome field is.  The field is the giant red blotch that appears to be an Octopus trying to eat Qatar for lunch. 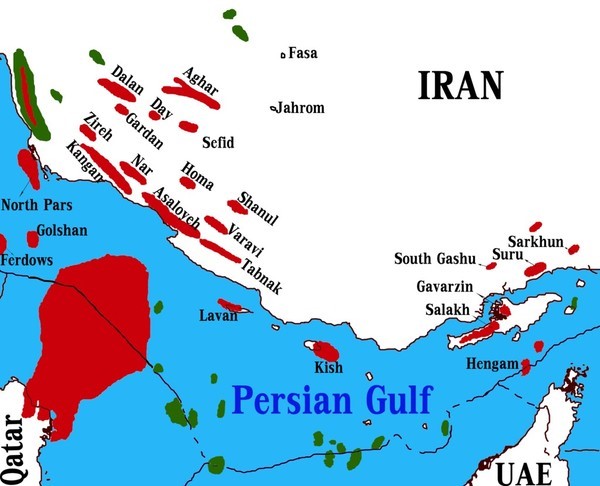 The North Dome represents virtually all of Qatar’s 22.9 bcf/day of natural gas production.  The 15.1 bcf/day that Iran produces from its portion of the field is roughly half of Iran’s total production.

If Iran hits its 26.5 million cubic meters per day target for South Pars it will be producing more from the field than Qatar.

Where Is All Of This Additional Natural Gas Actually Going To Go?

Despite being the fourth largest natural gas producer in the world Iran isn’t even among the world’s top 10 gas exporters today.  Iran accounts for less than 1% of global gas trade, exporting just a little to Turkey and Armenia by pipeline.

Meanwhile Qatar has become the largest LNG exporter in the world thanks to the North Dome.

Qatar has a big advantage when it comes to exporting natural gas.  While Iran has 77 million people, Qatar has only 2 million.  Very little of the gas that Qatar produces gets consumed domestically.

Iran actually uses oil to power some of its power plants because it doesn’t have sufficient natural gas supplies.

An additional issue is that Iran must re-inject a significant amount of the natural gas it produces into its aging oil fields to help sustain production.  A lot of that extra 11.7 bcf/day of production in a two year period will be used to help pump Iranian oil, and finally allow Iran to join the oil exporting club.

But they will need export markets to get that full amount online.  Where will all that gas go?

One certainty is that one to two billion cubic feet per day (1-2 bcf/d) of gas will be shipped via pipeline to Oman under an agreement reached in 2014.

That pipeline is already 80% complete.

Longer term Iran would be more likely to ship natural gas to Asia than Europe.

Already underway is a pipeline project to Pakistan where Iran has completed its part connected the South Pars field with the Pakistan border.

This pipeline could the easily be extended to energy hungry India which should have demand growth for decades to come.

Tehran could also restart work on Iran LNG, which was as shut down in 2012 after Western sanctions were tightened. LNG exports would allow Iran the freedom to pick where it wants to ship its natural gas at any point in time.   And as Mills points out, it takes a long time to build an LNG export terminal though, so that isn’t going to come on line any time soon.

EDITORS NOTE–Energy used to just be about oil and gas.  Now it’s about solar and wind and electric cars as well.  The entire US utility industry has to adapt to this–so they are creating The Smart Grid.  My first Smart Grid was PowerSecure (POWR-NASD) which was just bought out for a 50% gain in six months for OGIB subscribers.  Southern Company paid a 90% premium to the closing price.  I hope my second Smart Grid stock doesn’t get bought out for a quick 50% gain, because I think it has a long way to run…but it might…CLICK HERE to get my next Smart Grid stock before it’s gone.