Even before Tuesday’s big jump in natural gas prices, I was intrigued to see some of the leading natgas stocks in the US hold up or go up on days natgas was down this week, like EQT, Southwestern, and Rice Energy, (which my colleague Bill Powers profiled at $9.47/share on Feb. 9 and is now up 80% in two months)…I thought traded quite bullishly last week week.

Fundamentally, there is a very bearish 1 Tcf (TRILLION cubic feet) YoY surplus of natgas inventories in the US.  But investors have to remember that bloated inventories are today’s news, and the Market tries to price in what it thinks will happen in the future, 6-9 months from now.

The Street is seeing natgas production almost flatten in the US so far in 2016, after jumping 4-5 bcf/d each of the last two years.  That is somewhat bullish, though production flattened in 2013 as well before making those big jumps in ’14 and ’15.

Overall natgas demand has steadily kept up (mostly) with production, and is really the untold story of this market over the last few years.

And now the Weather Gods could co-operate with the bulls.  This summer is expected to be hot–like 2012 hot–which saw corn yields shrivel and corn prices soar.   Natgas prices also doubled off the lows from April 2012 to December 2012.

A hot summer isn’t near as bullish as a cold winter (3-4 bcf/d more demand for hot summer but up to 10 bcf/d for a cold winter), but we may get a cold winter coming (2016/2017) as the National Oceanic and Atmospheric Administration’s (NOAA) Climate Prediction Centre came out on April 14 saying there was a good chance of a La Nina weather system for next winter.

La Nina is kind of the opposite of El Nino (not 100% different), especially along the heavily populated and high natgas-consuming region of Chicago to the NE US coast.

A colder winter can mean up to 10 bcf/d difference in overall natgas usage from Nov-Mar, which is what the natgas analysts mean when they say “winter”.  That’s a lot; over a 10% swing at 90 bcf/d. 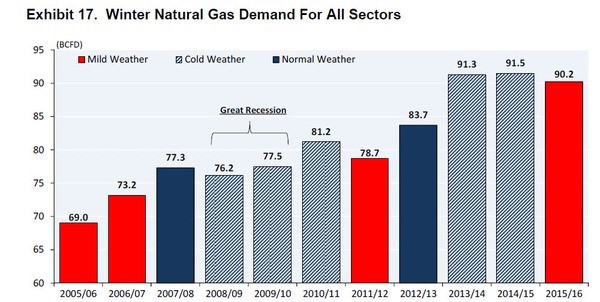 And in the Atlantic, a huge mass of cold arctic water the northern part has kept the Gulf Stream quite far south, so there is a build-up of warm—very warm—waters there.

That could mean storms and hurricanes.  Hurricanes used to be a big deal for natgas prices because the Gulf of Mexico (GOM) used to provide a higher percentage of overall US production.  Now it’s just a hair over 4%.

GOM natural gas production is down about 50% since 2000.  That will increase in the coming years as there was a dearth of new production after the Macondo/BP oil spill in April 2010—but several new projects are coming online in the coming two years.

So if there is a really warm summer this year, that could mean 4 bcf/d extra demand, and over 150 days that would more than half the current 1 Tcf YoY storage surplus—and allow low cost producers to lock in some great profits.

Costs for natgas producers have come down a lot—more than people expected.  I see sub $1/mcf all in costs for some producers now.  I saw how Canadian Montney producer Painted Pony (PPY-TSX) hedged like mad at $2/mcf recently because they make good money there.

So between warm Atlantic waters this summer and La Nina this coming winter from the Pacific, natgas investments in the coming 1-3 months could be very lucrative.  Does that create The Perfect Storm for natgas stocks?

As in oil, leading US natgas stocks have had a big jump in the last four weeks.  As an investor I wonder how much of that is the Dow pulling everything up and how much is really natgas related.  But charts of leading stocks in both commodities are surprisingly similar—strong bounce off mid-February lows through the short and mid term moving averages all the way up to the 200 dma.

Now the moving averages are narrowing quickly—and that usually presages a big move of some kind.  If I had to guess now, I would say that it would be up.

But fundamentally, very little if anything has changed recently.  Perhaps the Market is saying that any month that US natgas production is only up 1 bcf/d YoY is bullish.

The stocks of Canadian natgas producers will rise in some sympathy, but Alberta and B.C. are at the back of the pipe so to speak, far from major markets.  That means higher transportation costs, which means lower realized prices for producers to stay competitive.  Lower realized prices=lower stock prices.

And the Pacific Northwest got buckets of rain this winter, about 130-150% of normal, so hydro-electric supply should be a lot more this year, and Canadian natgas filled that demand the last couple years. This is a bit bearish for Canadian natgas.

Despite Canadian producers like Painted Pony doing an excellent job reducing costs down to sub $1/mcf costs, I see the first Big Move in natgas stocks being in the US.  Or has it already happened?

EDITORS NOTE–Who would have thought in January 2016 that Tier 1 oil and gas stocks would double from February to April?  What happens now?  Lucky for me, I know the one western producer that has lower costs than the Saudis.  Nobody else can grow like this company at $45 oil.  And if oil goes to $70, it will have the largest profit margins of any producer I know.  Get Ready.