Oil is up.  Consensus has changed from a supply glut to a more balanced market by the end of this year—but the Market is in full swing pricing that in now.

Energy producers across the board have had a good run in the last month, and it could continue—both Brent and WTI prices rose above their 200 day moving average (dma) for the first time since November last year.

So now you want to buy some oil stocks.

To introduce some discipline into this process, here are a couple questions you should ask about any oil stock your broker pitches you, or an idea you come up with yourself:

1. Could this company get a “bought deal” financing done tomorrow? A “bought deal” is where the stock broker firms guarantee the producer/public company their money and then try to sell said financing to their retail and institutional clients.  If the market views the company as undervalued, or having great growth prospects, and the answer is yes, then that means there is good demand for the stock and it’s likely going higher.

2. This second question is more geared to savvy oil investors—Would you take this company private today at its current valuation?  Would you buy the entire company for what it’s trading at today (and don’t forget about the debt!)?

It’s an interesting question because of a couple factors.  One is that many of the high quality names are trading at all-time high multiples of cash flow—because right now there isn’t much cash flow, even after oil has jumped 50% since February.

The share prices of high quality oil stocks didn’t go down much over the last two years, as energy investors high-graded their exposure to the sector.

That means they sold all the Tier 2 and Tier 3 producers—ones with higher debt, or just with management teams that they knew would not be able to raise money if needed in a prolonged downturn (which we got)—and bought more of the high quality, leading oil stocks.

In the US, think of a company like Synergy (SYRG-NYSE).  The stock held up incredibly well through 2015, only falling in early 2016 when new CEO Lynn Peterson (formerly of Kodiak, bought out by Whiting for $3.8 billion at the top in 2014) said he was going to do lots of M&A at the bottom of the market—a smart idea but scared the daylights out of investors.

Two equity raises totaling 30 million shares later, the stock has recovered, and they have no debt, a proven CEO but trade at 18x cash flow.  Great company—but is it worth that? 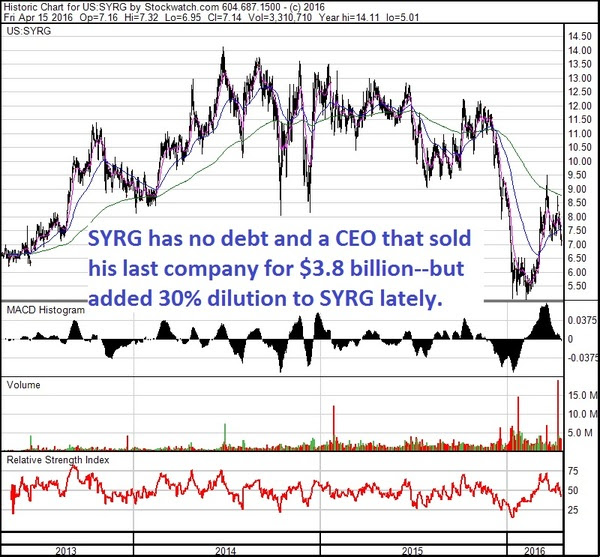 Another example would be Cabot Oil and Gas (COG-NYSE).  It’s considered one of the top US gas producers—but at 22x cash flow would you buy it here? Twenty-two. Its large production gives it good leverage to rising natgas prices.  Would the Market finance it here?

Equity raises are another thing investors need to be aware of now (besides the oil price ;-)). Many of these leading junior and intermediates have diluted their shareholders with new equity raises—and it could be awhile before that larger share count figures into their per-share production and cash flow. The Market pays for per-share growth; not absolute growth.

The Market could see stagnant to lower per share cash flow in the coming 2-3 months than a year ago because these equity raises have diluted shareholders so much—despite rising commodity prices.

In Canada, look at Spartan Energy (SPE-TSX) or Raging River (RRX-TSX).  In Rick McHardy and Neil Roszell respectively, you have two proven Tier 1 CEOs who have built their companies into the lowest cost oil producers amongst all the junior and intermediate oils in Canada. 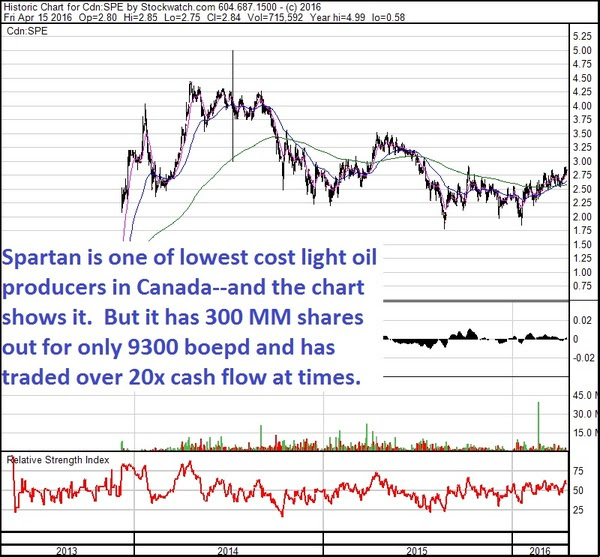 The issue for investors buying The Best is…the share prices of Tier 3 companies have been dramatically outperforming, and will continue to do so as oil prices rise.
But has the Market given them too much credit too soon?This is especially true of large, debt laden producers in both Canada and the US. Natgas producer Chesapeake (CHK-NYSE) and Canadian oil producer Baytex (BTE-TSX/NYSE) has quadrupled off their lows of $1.56.  Oil producer Halcon (HK-NYSE) is up 500% and Encana (ECA-TSX/NYSE) has more than doubled. 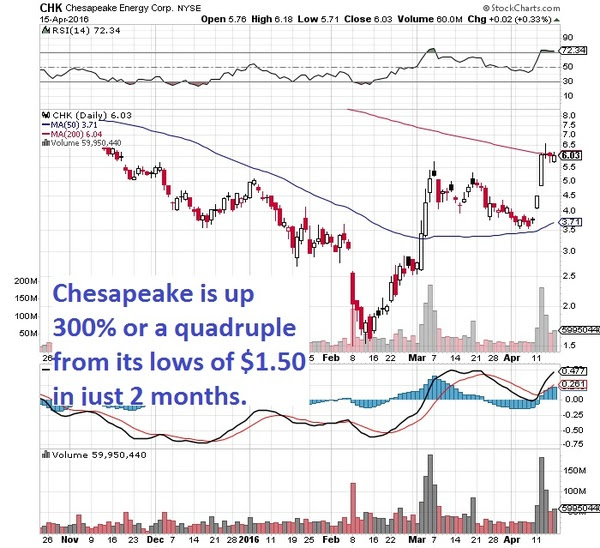 But if you could afford to (hey, I get we’re talking tens of billions of dollars), would you take any of them private—along with all their debt—and make them your own at today’s stock prices?

These are companies that are former darlings with tens of thousands—sometimes over 100,000 boepd—and massive debt.  In most instances, it was because of big acquisitions in 2014, mere months before oil started its decline.(This goes to show that senior management of big producers—in all commodities—often have no clue where the underlying price of their production is going.

The share prices of these (now) Tier 3 companies have been crushed some 80-95% from their highs just two years ago.But if oil does stay in the $40-$50/barrel range, cash flow will remain very tight, and these companies will give investors massive losses at some point later this year.

Just this week, the Energy Information Agency (EIA) in the US said it expected the oversupply in the global oil market to come down to 500,000 bopd, from what it says is the current 1.5 million bopd.

That will give a lot of the highly levered, debt laden producers a boost.  Investors love them, judging by the charts. But the Market is not rushing out to finance these companies—yet.

But would you bet your net worth on that happening?  Just asking.  And you should ask that too.

EDITORS NOTE–I’m just finishing an updated report on—The Company That Beat OPEC.  It’s an oil producer with as low or lower costs than the Saudis.  They are ready to turn on the taps as well–and with such low costs, theirs is the most profitable production in the western world.  If you want any exposure to oil, this company gives incredible leverage–with NO debt.  It’s my #1 Oil Stock. Stay tuned.