Home Investing Are These 3 Zombie Stocks Now a Buy?

Three zombie stocks have come back from the dead in the Canadian oilpatch, and they all took a different route.

Maybe “zombie” is an unfair term, but all three had debt problems that were hurting their valuation.

And it may be an opportunity for investors paying attention, as—arguably—the  Market has yet to realize the scope of the transformation these companies have made.

1. Penn West – Now That Is A Transformation

When Penn West (PWE:NYSE; PWT-TSX) released its first quarter earnings report on May 16 investors of the company were faced with this unpleasant disclosure:

“As there is the potential that the Company will not be in compliance with its financial covenants at the end of the second quarter of 2016, there is a risk of default under the Company’s bank facility and noteholder agreements. This has resulted in uncertainty on the Company’s ability to continue as a going concern.”

This zombie’s days of hopelessly wandering the earth appeared to be numbered.  The end appeared in sight.

Who would have thought that one month later Penn West would be a company with a very healthy looking future?

Penn West went with the old fashioned method for cleaning up a dirty balance sheet.  It sold an asset—one of the company’s crown jewels in fact.

They had to—it’s that simple.  It was live or die.

Penn West sold all of its Saskatchewan assets (Viking focused) to Teine Energy for $975 million.  The company supplemented that with another $140 million of Alberta asset sales.

That is over $1.1 billion and it re-shaped Penn West.

Pre-transaction Penn West’s debt to cash flow ratio was touching 12 to 1.  As context, in Canada the Market gets nervous when it’s over 2:1, though now I would say 3:1.

In the US, the Market will give you as much as 4:1 before the stock gets punished.  So that kind of leverage isn’t bad, it is outrageous.
Penn West had a debt problem at $90 oil, so you can understand why the company was in such dire straits now.

With an additional $140 million of Alberta asset sales expected before the end of the year Penn West’s debt to cash flow will be down to 1.5:1 in 2017 (assuming $55 WTI).

But the cost was selling extremely high quality assets.  The price Penn West received was $71,400 per flowing barrel which was good all things considered.

Two years ago though the company could have received almost twice that valuation.  And that value is now permanently gone.

The transformation of Penn West from 2008 is absolutely stunning.
The company back then was producing nearly 200,000 boe/day.

Now, coming into 2017, production is expected to be roughly 25,000 boe/day after asset sales.  Management had to sell almost 90% of the company—and still didn’t get completely out of debt.

But the company is back from the dead.

For investors who are new to the Penn West story, this smaller company with much less leverage may be worth a closer look.  The market hasn’t yet priced in what this company is worth now that it has cleaned itself up.

They say that necessity is the mother of invention.

There is nothing like an oil crash to give birth to some creative financing deals in the oil patch.

Athabasca Oil (ATH:TSX; ATHOF-PINK)–down from $18 to 96 cents in the last six years–just completed a unique royalty sale which improved its ability to survive through low oil prices.  It’s an intriguing solution.   Here’s how it works:

In exchange for receiving $129 million of cash Athabasca has granted a “contingent bitumen royalty” on a certain portion of its oilsands (thermal or SAGD) assets.  A royalty is like a tax that the producer will pay on barrels of production to the owner of the royalty.

The amount required to be paid under the royalty will be calculated on a sliding scale ranging from zero to 6% depending on Athabasca’s realized bitumen price.

The way the royalty is structured makes it so Athabasca doesn’t pay any royalty when oil prices are low and significantly more if oil prices are high.

The slide below breaks out the royalty percentage at various bitumen prices. 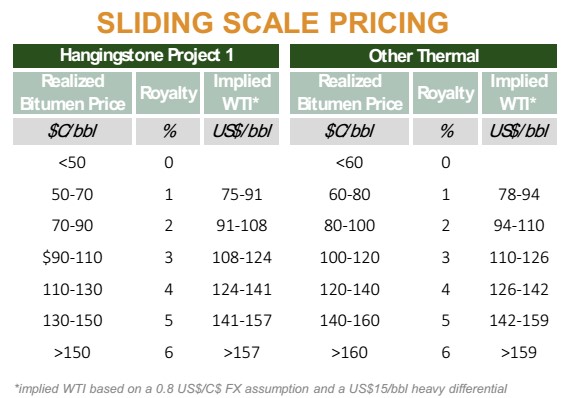 Burgess Energy Holdings—the royalty buyer—obviously thinks oil prices are going a lot higher over time—because if WTI is under $75 Athabasca doesn’t have to pay a dime.

Athabasca believes that the royalty will impact its cash flows from this 12,000 boe/day of thermal production at various oil prices as follows: 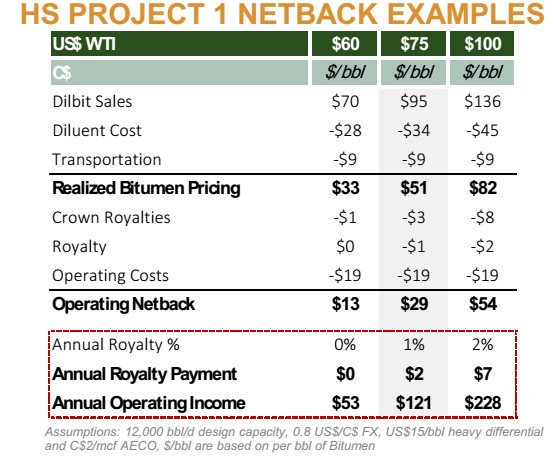 For a lot of cash up front Athabasca isn’t giving away anything unless oil goes a lot higher.  This seems like a great trade of upside that might be available if oil prices soar for a considerable cash infusion today.

The worst case scenario is that while Athabasca makes a lot of money at high oil prices shareholders have to complain that it should be making even more money.

The royalty doesn’t apply to any production expansion beyond the 12,000 barrels of production that are attached to the deal.

After completing this deal Athabasca is sitting with a net cash balance of $85 million and has no worries about riding out oil prices staying lower for longer.

3. Birchcliff Energy – You Can Actually Deleverage Through Acquisition

It is natural to think that a company faced with too much debt is going to be a seller of assets.

That isn’t always the case.

The company has roughly 40,000 boe/day of production in western Canada.  They own the infrastructure (pipelines, gas processing) tied to this production so they don’t pay expensive third party processing fees.

At a debt to cash flow ratio of 8:1 Birchcliff’s low cost advantage had become overshadowed by its debt.

The company announced that it is buying the Gordondale asset from Encana(ECA-NYSE/TSX).  This asset produces 25,000 boepd (59% natural gas, 15% light crude oil and 26% NGLs). 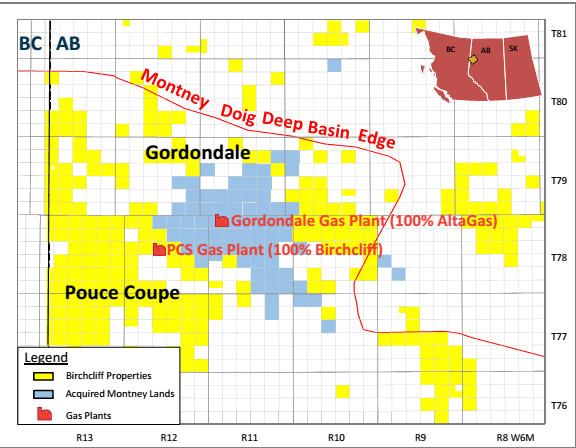 In one fell swoop the company is getting 50% bigger.

The purchase price for this is $625 million and the vast majority of the cash will come from a $548 million equity issuance at $6.25 per share.

Following the transaction Birchcliff expects to have slightly higher debt (up $75 million to $675 million) but much higher cash flows.  With the mid-range of 2017 cash flows being $265 million this deal brings Birchcliff’s debt down from a frightening 8:1 cash flow to a much more manageable 2.5:1.

Perhaps even more important is that the additional cash flow will likely get Birchcliff a bigger operating line of credit increased.  The company was 84% drawn on its $750 million line and the Street hates companies that get down to little liquidity—especially an unhedged producer like Birchcliff.

When you have very little liquidity it doesn’t take much of a cash flow turn for the worse to create a catastrophic cash crunch.

This deal deleverages the company, adds liquidity and even comes at a reasonable price at roughly 6x trailing cash flow, but closer to 4 times cash flow at 2017 strip pricing.

When The Uninvestable Become Investable

When transformative transactions like these take place it takes a while for the Street to fully digest what has happened.

Investors have stayed away from all three of these names due to concerns over leverage, liquidity and low commodity prices.

Each of them gave away something in their respective deals, but these stocks can be great trades given that they bring certain long term survival for these companies.

While the Street may not value re-born zombies the same as market leaders, they could get re-priced as the healthy businesses they now are.

Editors Note—I like to buy best-of-breed companies that don’t need to dilute at the bottom of the cycle.  I’m very excited about the upcoming drill program for my #1 Oil Stock—they’re right beside an 850 million barrel MONSTER deposit…IMHO, it’s a gimme…Get The Growth!  For trading symbol, Click HERE.