By Nathan Weiss and Keith Schaefer

Where is all the oil coming from?

Oil inventories continue to surge, but U.S. production has flatlined for weeks—even months.

I mean really—look at these simple facts that have been staring the Market in the face for months:

Yet U.S. oil inventories continue to climb—by a stunning 6.54 million barrels a week so far this year—almost 300% over the typical December-May 1.71 million barrels per week.  So U.S. production YTD only accounts for 17% of this.  What gives?

This huge growth in inventories has caused some high profile analysts to call for $20 oil.  The idea of oil storage becoming full in the U.S. caused a second big downleg in March in WTI prices—set in Cushing OK—to a low of $42/barrel.

The reason behind this seeming paradox?  When you look at the data, the creators of South Park got it right – we should really ‘Blame Canada!’

Two new pipelines recently debottleneck crude flows from Canada to the Gulf of Mexico, resulting in a 13.99% increase (408,000 bopd) in U.S. crude oil imports from Canada in December (2.86 million additional barrels per week) that has largely been maintained.  When you contrast that fact to the US oil inventory build in the first chart below—well, that’s almost all  you need to know.

The vast majority of Canadian oil exports is heavy oil from the oilsands.  While shale production—light oil—begins to stall and fade, oilsands production will increase every year for at least the next five years.  Growing production and heavy discounts (pun intended) will keep U.S. refiners processing all the Canadian heavy oil—called Western Canada Select, or WCS—they can.

Even worse, crude oil imports are increasing as East and West coast refiners increase utilization, requiring them to consume additional seaborne crude (from Saudi Arabia and other places) in order to maintain their crude input blend slate: As U.S. refinery utilization increased from 89% to 92% over the past four weeks, total U.S. crude oil imports have averaged 7.56 million bopd, well above the YTD average of 7.26 million bopd and the March average of 7.25 million bopd.

Unless U.S. shale production falls dramatically (and soon), the U.S. crude inventory situation could get very ugly this summer as 1-3 million weekly builds continue – just as investors have written off full inventories as a risk factor!

Analysts generally blame a surge in domestic crude oil production or reduced crude oil refinery utilization for the sharp growth in U.S. inventories over the past three months. Others hold onto various conspiracy theories, including the belief Saudi Arabia is intentionally stuffing crude oil (from various countries) into Gulf Coast storage facilities in order to drive down WTI crude prices and spare Brent pricing.

Before we truly “Blame Canada!” let’s put those theories to bed first: See this chart of U.S. crude oil inventories (DOESCRUD <Index> on Bloomberg), which clearly shows the surge began in early January: 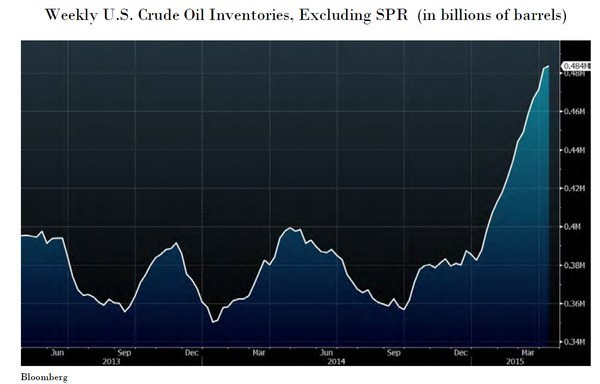 So far in 2015, inventories have increased by a stunning 98.23 million barrels (6.54 million barrels per week) and unless U.S. shale production falls off a cliff in the next 3-5 weeks, are on track to grow by a further 20+ million barrels by the end of May! 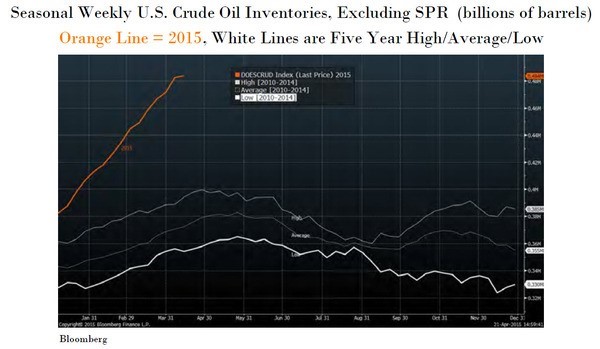 Is Surging U.S. Production to Blame?

The previous crude oil inventory  charts show something clearly changed at the beginning of the year.  While many  blame surging U.S. crude oil production,  the  official  EIA monthly  data  shows production  increased from 9.11 million bopd in November to 9.32 million bopd in December, before declining to 9.19 million bopd in January. 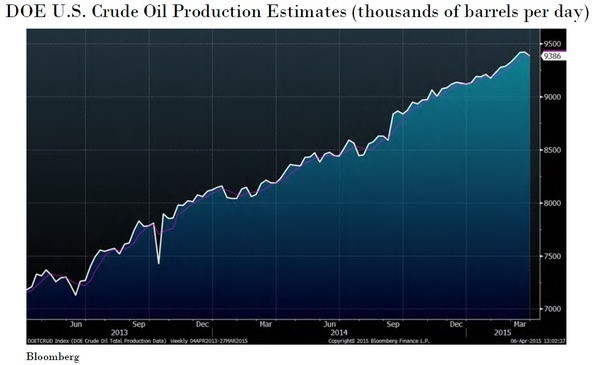 If we look at the seasonality of refinery utilization, we find the current utilization rate is a stunning 6.8% above the five year average of 85.3% for this week in April. Despite what is reported in the media, since November U.S. crude oil refineries have regularly been running at the highest utilization rates in more than five years, as the following chart shows: 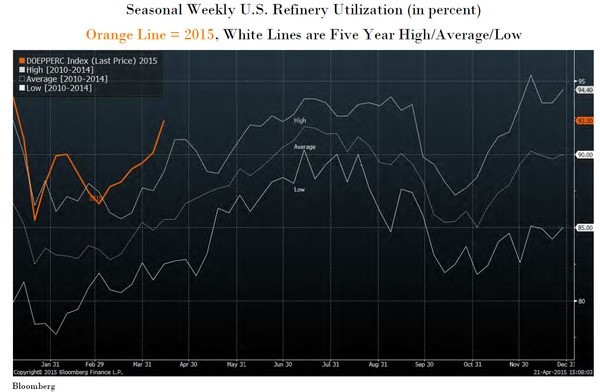 If refinery runs revert to the mean, it would mean a big jump in inventories. All this means analysts are now potentially under-estimating the risk U.S. crude inventories will continue to grow through the summer.

This is exactly what happened in December when U.S. refinery utilization rocketed to almost all-time highs (an unbelievable 94.2% for the month of December—traditionally the LOWEST time of year) as refiners took advantage of newly increased flow of cheap Canadian crude and built refined product inventories.

While the Texas Seaway Twin pipeline was technically operational in October, the December start-up of the Flanagan South pipeline was necessary to feed it Canadian crude. Together these two new pipelines led to a 13.99% increase (408,000 bopd) in U.S. crude oil imports from Canada (DOCRCANA <Index>) in December (2.86 million additional barrels per week), as the following chart shows: 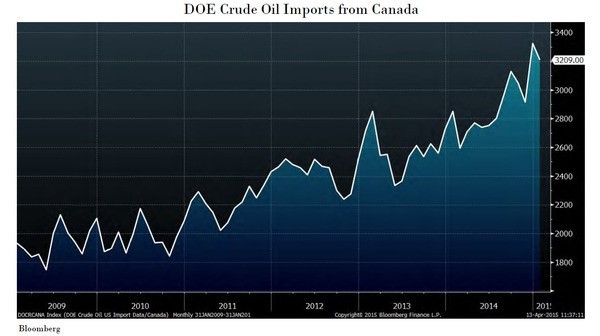 Most of Canada’s production is heavy oil from the oilsands in Alberta. BMO Nesbitt Burns, Canada’s 2nd largest retail brokerage firm, says that despite a sharp drop in spending, they expect oil sands production to grow roughly 10% in 2015 to 2.4 million bopd as several new start-ups come on line.

And with break-even costs of $25/barrel for in-situ producers, that growth is not threatened. 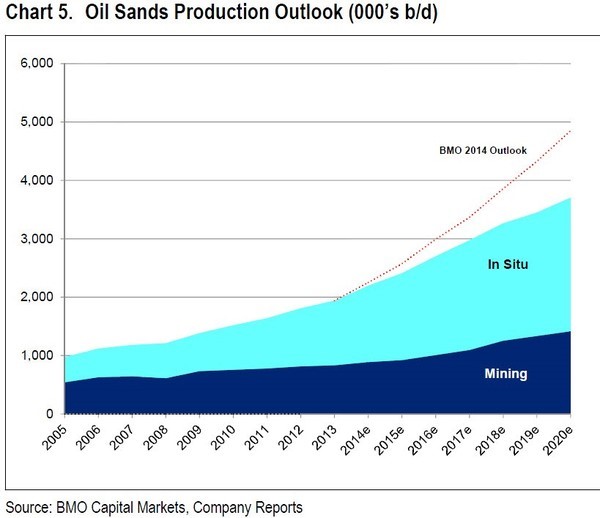 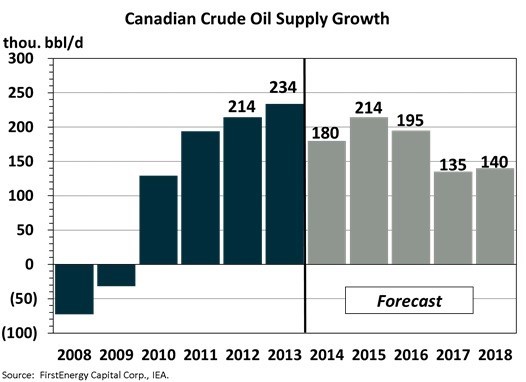 A wide array of Canadian production forecasts from Wall Street analysts effectively predict production will be flat.  This is what overall Canadian oil production looks like in the last three years: 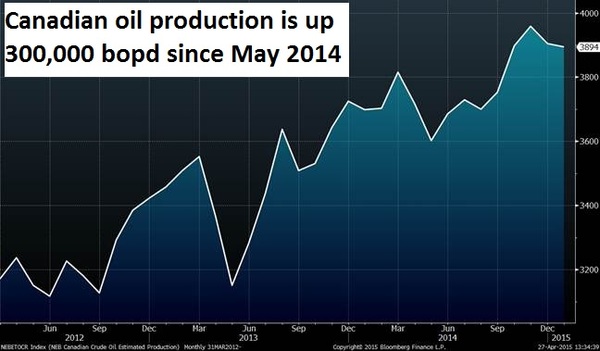 Oil prices have rallied the past few weeks as investors believe (for various reasons) the worst of the U.S. inventory builds are behind U.S. That’s true, but it’s still unclear how much U.S. crude oil production will decline or that refiners will be able to consume all of the crude available this summer.

But Canada’s oil supply continues to increase, and more of it is finding a way into the U.S. As a result, U.S. crude oil inventory builds could continue through the peak summer refining season – possibly at a rate of 1-3 million barrels per week.

This negative surprise could lead to another leg down in crude prices (particularly WTI) as investors (eventually) realize just how oversupplied the North American market is.

Even worse, crude oil imports are increasing as East and West coast refiners increase utilization, requiring them to consume additional seaborne crude in order to maintain their crude input blend slate: As U.S. refinery utilization increased from 89% to 92% over the past four weeks, total U.S. crude oil imports (DOEICESP <Index> on Bloomberg) have averaged 7.56 million bopd, well above the YTD average of 7.26 million bopd and the March average of 7.25 million bopd.

The U.S. crude inventory situation could get very ugly this Summer – just as investors have written off full inventories as a risk factor!

And you can Blame Canada!

(SouthPark’s (very) off-colour sketch by the same name can be found here–http://bit.ly/BlameCanada1)

EDITORS NOTE:  If this scenario plays out this summer, refinery stocks will benefit the most.  They are very profitable right now.  Click HERE to understand the profit potential for my two favourite refinery stocks.