Logistics are a bigger piece of the energy pie than ever before—especially rail.  Most energy investors are familiar now with the huge rise in crude-by-rail; getting Canadian and Bakken crude to the east and west coast refineries in the United States.

It saved the profit margins for many oil producers, and allowed them to choose from more customers (refineries)  that many chose to continue railing crude even when pipelines became available.

Logistics made me and my subscribers huge money in 2014 as there wasn’t enough rail capacity to get ethanol to markets during the Polar Vortex that year—especially along the west coast.  Profit margins for ethanol producers soared from 20 cents a gallon to over $2 a gallon in four months, causing ethanol stocks to go up 200-800%.

This year I think logistics can make investors a lot of money in another energy sector: frac sand.

Demand—and therefore pricing pressure—for frac sand has declined the least among the OFS—OilField Services sub-sectors.   Pricing is dropping 5-20%, depending on which analyst you want to believe.

But the frac sand market is still tight for Tier 1 sand or white sand–the best sand.  It’s the lower grades that have been hardest hit.  Analysts are projecting a continued tight market for Tier 1 sand in the United States as all the producers still drilling  believe the lower rig counts mean they can use Tier 1 frac sand.

Wisconsin—a northern state that borders Lake Superior—holds almost all the Tier 1 frac sand in the USA.  This adds huge cost to get the best frac sand south to Texas to the Permian and the Eagle Ford plays.

And despite the downturn in rig counts, there are a lot of Drilled-but-UnCompleted wells (the industry calls them DUCs) that will get fracked before the rig count turns up.  That will keep frac sand pricing well ahead of other service sub-sectors.

A March 13 2015 report by RBC Dominion’s Houston office (they’re the largest Canadian retail brokerage firm) shows that at December 31 2014, there was over 4000 wells drilled and waiting to be fracked in the USA: 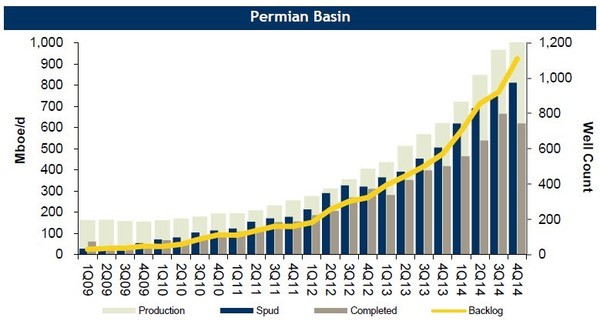 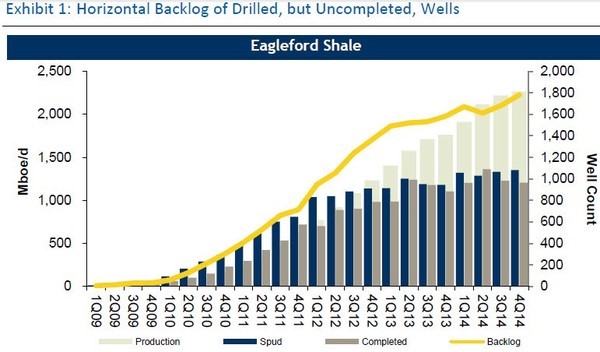 That’s why even in the face of the oil and gas downturn, everybody is trying to control more frac sand—the producers, the frac sand specialist suppliers (think Emerge (EMES-NYSE), US Silica (SLCA-NYSE) and Hi-Crush (HCLP-NYSE)), and the Big 3 service companies—Halliburton (HAL-NYSE), Schlumberger (SLB-NYSE) and Weatherford (WFT-NYSE)

Frac sand per well is increasing so much that even with a big drop in the number of wells being drilled in 2015, overall frac sand use is expected to only be down 15-20%.  And most of that is the lower quality sand.

Even as the oil price was collapsing, the major energy services companies had some eye opening data about how much frac sand (proppant) the industry is using.

Halliburton CEO Dave Lesar disclosed that the average amount of sand being consumed per horizontal well has surged 50% year on year.

I knew the “more sand is better” trend—I wrote about it when Whiting and EOG both said they were getting greatly increased flow rates from their wells by using tightly spaced short wide fracks instead of long skinny ones.

But the fact that the entire industry is—on average—using 50% more proppant year on year really blew me away.

It has become crystal clear that the industry has discovered that the cost of using more sand is more than justified by the increase in flow rates that are the result.  And according to Halliburton’s Lesar—the upper boundaries of how much sand is optimal are still being defined.

For the big service players like Halliburton and Baker Hughes (Hallibaker?) this big increase in sand consumption has fundamentally changed their business.  It is both a huge opportunity and a huge challenge.

The speed of the increase has the service companies scrambling to secure enough sand and to have the ability to transport it to the well sites in a timely fashion.

Late last year both Halliburton and Baker Hughes noted that each had experienced some disruptions in having the sand at the well site on a timely basis.  Halliburton in particular went out of their way to tell the market they plan to vertically integrate the frac sand supply chain right from the mine on through to the well site.

Halliburton alone has more than doubled its sand-storage capacity at its shale play terminal, is on track to double its rail car fleet and has cut 30 deals with trucking companies for additional transport capacity.  The company has even started a “sand-logistics” command centre to monitor sand supply levels in the various US basins.

That is how vital frac sand is to this industry.

The amount of sand that is being used in each and every well is a bit hard to comprehend.

Halliburton CFO Mike McCollum indicated that one year ago it was taking 20 rail cars of sand to do one frack job and that today that number has increased to 75.  For some perspective, that means that each frac job has gone from consuming 4 million pounds to 15 million pounds of sand.  It literally takes an entire train load to frack one well.

You can see how this increase is causing all kinds of logistical headaches for the service companies.

Fracking involves injecting highly pressurized water into the horizontal well which cracks the oil bearing rocks—creating fractures—allowing oil and gas to seep out.  The frac sand gets lodged in these cracks and pores keeping them “propped” open so that as much oil and gas as possible escapes into the well.

Even with lower crude prices, frac sand is one expense that the oil producers will not be skimping on—it’s the key ingredient in creating the highest flow rates per well and therefore the key to profitability.

Now back to logistics—interestingly, the sand itself is less than half the cost to the producer.  Transportation costs and logistics are more important—as much as two-thirds the cost of their end-price.

And because most of the good quality sand is up north in Wisconsin,  producers in Oklahoma (Fayatteville shale), Louisiana (Haynesville Shale) and Texas (Barnett, Permian and Eagle Ford) producers are desperate to find a large Tier One frac sand deposit much closer to home.

Here’s a quick look at how the final frac sand price breaks down for producers: 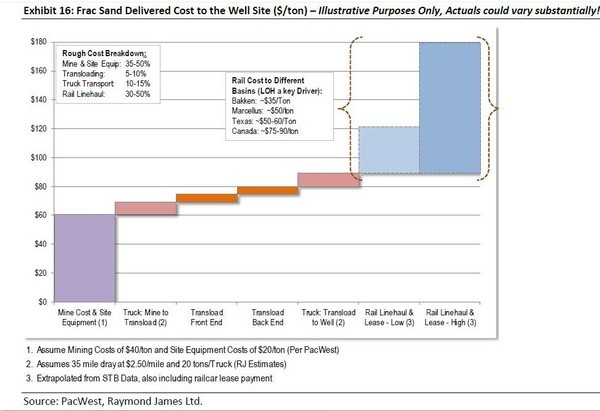 So when a producer pays $180/ton for sand, only about $60 of that is the sand itself.  Over half is transportation.

Even with the drilling downturn, the industry desire to control more of the value chain around frac sand is continuing.  And the Market wants more sand closer to Texas.

That combination makes me very intrigued about one completely off-the-radar  company that is now proving up a key source of Tier One frack sand right next door to America’s most active horizontal plays.

They’re very close to rail, and would have HALF the transportation cost to Texas and Louisiana. If you are thinking that a company like that could be a tempting takeover target….you would be right!

I’ll introduce you to that company next time…. 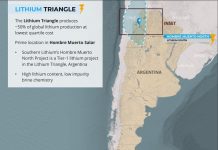