One of the largest undeveloped shale plays in the world will get its First Big Test next month–June—the Beetaloo Basin in northern Australia.

It’s timely, it’s big, and for shareholders of Falcon Oil and Gas (FO-TSXv), it’s free.  CEO Philip O’Quigley (yes he lives in Ireland) has done a novel-worthy job of aligning everybody’s interests—royalty owners, shareholders, joint-venture partners—into a $200 million drill program that starts in less than 90 days.  And none of that money is being spent by Falcon.

In Part 1  I introduced you to Australia’s Beetaloo Basin which is a potential international horizontal play that contains a best estimate of 21.3 billion barrels of oil and 162 trillion feet of natural gas.

Falcon has a big piece of that massive prize.

Falcon is a registered holder of three Exploration Permits (EP76, EP98, EP117) that cover 4.6 million gross acres.  The land is located 600 kilometers south of Darwin Australia and is under explored. 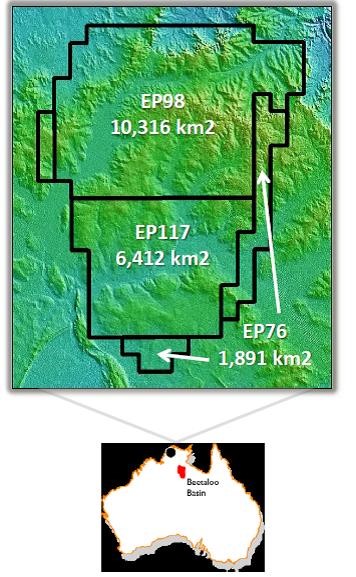 Last May, Falcon announced a farm-out deal with not one, but two major oil and gas players.   The deal was stunningly attractive relative to other farm-outs I have seen done by junior companies of a size similar to Falcon.

The terms of the deal tell us a great deal about how the industry views the potential of the Beetaloo shale.   The quality of the partners that Falcon was able to attract tells us even more.

The farm-out involves Australia’s Origin Energy Limited and South Africa’s Sasol carrying Falcon in a nine well drilling program.  The total dollar value of the deal is an impressive $200 million with Falcon retaining a 30% ownership in the play and Origin and Sasol acquiring 35% each.

These companies are two fantastic partners for Falcon.

Sasol is a $30 billion plus company out of South Africa that brings not only horizontal drilling expertise but is a major LNG and gas to liquids player as well.

Origin Energy may not be as familiar to North American investors, but it is also a large company ($15 billion plus) and more importantly an Australian operator.   They don’t just know the local culture, they ARE the local culture for oil and gas.

They know how to deal with the service companies and the governing bodies of the energy industry. Origin’s Australian connection can surely lead to better deals with service providers and fewer mistakes operationally.

Falcon got $20 million in cash up front in their JV with Origin and Sasol, and a $180 million commitment for a three phase work program.

What that means is that Falcon isn’t going to have to spend a dime over the course of this nine well program.

The first phase of the program involves 4 vertical wells (one of which will be fracked) and 1 horizontal (also to be fracked) and will cost roughly $64 million in Aussie dollars. And not only is Falcon carried on this phase, there is no cap on the estimated Phase 1 $64 million capex program.

Like with any farm-out, after that first phase Sasol and Origin have the option to walk away if they don’t like what they see.

As I covered in Part 1, the Beetaloo offers multiple stacked pay formations.  This $200 million program is going to focus on just one of those formations called the Middle Velkerri.  It is the biggest, thickest formation in the Beetaloo and has the most oil and gas resource in place.

For some perspective on the leverage Falcon’s 30% interest gives the company to this play we can compare the Beetaloo to the world’s two biggest horizontal plays (the Bakken and Eagle Ford). 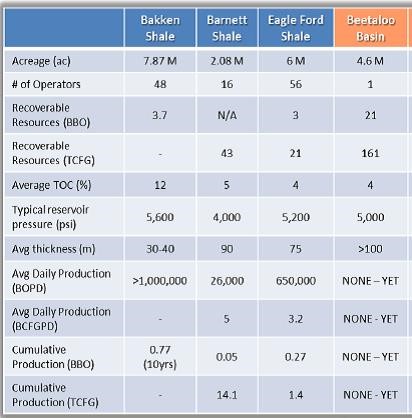 Falcon’s 30% interest gives the company exposure to 1.38 million net acres of the Beetaloo.   1.38 million acres in the Bakken would give the company 17% of the entire Bakken play, in the Eagle Ford it would be 23%.

I’ve sat down with O’Quigley several times and heard the story of how he was able to put this deal together.  Politics, grace and common business sense means the details can never be printed, but it involves flying around the globe multiple times, and being firm in your convictions.

O’Quigley was lucky because he never had to bluff.  The quality and size of the land base, and the ongoing LNG development just north of the Beetaloo were really all the carrots he needed.

O’Quigley started with the company a few years ago, when Hess (HES-NYSE) was their partner in the Beetaloo. In 2011 and 2012 Hess spent $80 million shooting the largest 2D seismic program in the history of Australia (3,490 km) on Falcon’s Beetaloo lands.

As part of this agreement Hess had the option (after shooting the seismic) to acquire a 65% interest in Falcon’s acreage.  But at the last minute, Hess asked for an extension on the deal so that it could bring in another partner.

O’Quigley and Falcon said no–a bold statement for a junior with an unproven property. Hess walked away.  So Falcon got $80 million worth of seismic for free.

There was a lot of second guessing of Falcon’s management between the time they declined the Hess request and the signing of the Sasol/Origin farm-out….but they been vindicated. 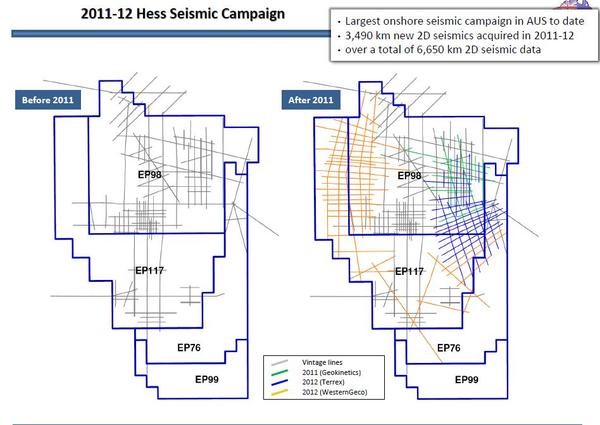 Falcon’s remarkable deal with Sasol and Origin didn’t do anything for the company’s stock last year.

The reason was that drilling was a full 12 months away—which is now.  In Part 1 of the Beetaloo, I explained that for six months of the year the acreage can’t be accessed.  November through April in this part of the world is wet, wet, wet.

So the three stage farm-out will take three years—but the first drilling starts in June this year.  After Phase 1, time needs to be taken to process the information gathered and make plans for Phase 2—the next year, after the next dry season comes around.

This $200 million program can’t all happen immediately, and that is why the market really didn’t care.

I’m not the most patient guy either, but the interest that the Big Boys have shown in this acreage has gotten my attention.  The stock has 912  million shares out trading at 10 cents, for a $91 million market cap, and $12 million cash.   Almost $80 million has been spent on the asset and they’re being carried for up to $180 million in new drilling.

And that drilling is starting now.  Often the first discovery creates the greatest lift in value. If this drilling program is successful in outlining a huge onshore resource for Australian LNG, Falcon may not be around to see Phase 2.

Next post: How Can Oil Stocks Be Cheap AND Expensive

Previous post: The Market has Waited 3 Years to See This Drilled