If Natgas Production is Falling, Why Aren’t Natgas Stocks Rising?

Has U.S. shale gas production finally stopped growing?  According to the EIA’s August Monthly Drilling Productivity Reports (DPR) the answer is yes—even the monster Marcellus play in Pennslvania is rolling over in production–and that should be bullish for natgas stocks in North America.

But take that info with a grain of salt–for a couple reasons.

That includes the DPR reporting which in fact is all guesswork (forecasting) since it is forward looking.

Secondly, another EIA publication–the Short Term Energy Outlook, or STEO–says that US natural gas production will continue to increase through 2015 to 78.7 billion cubic feet per day, a rise of 4 bcfd–and continue growing another 1.8 bcf/d into mid 2016, peaking at 80.5 bcf/d–and they say most of that growth will come from the Mighty Marcellus. (The discrepancy is that STEO takes into account future infrastructure (and there’s a lot of new pipelines coming out of the Marcellus) whereas the DPR does not.)

The Market is saying the STEO version is more correct.  Witness the main Henry Hub natgas prices remaining stuck in a tight $2.65-$2.95 per gigajoule range.  And the key natgas stocks I watch for a coming turnaround in commodity pricing are:

None of those stock charts given any hint that natural gas pricing is about to turn up.

According to the monthly DPRs, U.S. shale production actually started declining in the month of June with a drop of 112 million cubic feet per day.

The DPR for June still showed both the Marcellus and Utica plays growing.

Since June, the EIA believes that all of the shale plays have joined The Decline Party.  (By the way, conventional US gas production has been declining since about 1972.)

As of the August DPR projections every shale play is showing natural gas production in decline in September. 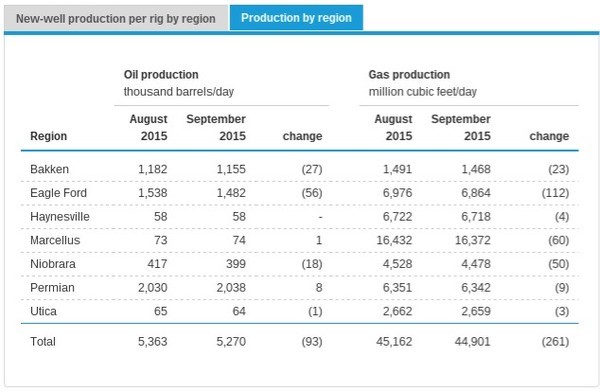 The last play to roll over was the Utica, with all the DPR showing declines in all other shale plays (including the Marcellus) starting in July.

That (IF it comes to pass) is a significant 1.5% decrease to U.S. shale production in just four months.

There is science behind these projections, as the EIA takes the number of rigs operating in a region and calculates new production based on estimates of productivity per rig.  That new production is then matched up with anticipated production declines from already producing wells.

Apparently the EIA’s calculations conclude that the amount of new production being brought on no longer exceeds the rate at which legacy wells are declining.

So no, it is far too early for dancing bulls.

Jack Weixel is VP Analysis at PointLogic Energy, which provides in-depth markets coverage, and trend analysis to oil and gas participants.  He says production will ramp up quickly if natgas prices move higher outside the current tight range.

“Producers have grown so adept at responding to price, that even the slightest indication of a rise in prices would spur on more drilling and more completions, particularly in the Northeast (Marcellus and Utica—ks).

“Even the slightest chance to realize wellhead prices above $3.00 or hedge, at say $4.00 in the near term, would be a welcome gift in 2016 for many in the E&P community.”

More time is required however, before we can conclude that the EIA’s DPR estimates are accurate.  If the Marcellus and Utica have both started declining it will be the most bullish news for natural gas in a long time.  Investors often forget that structural demand for natgas has increased dramatically in the last few years, along with the rise in production.

While this news does appear to be as yet bullish enough to move natural gas stocks up–it still may be the very thin edge of the wedge of declining US natgas production.

As an ending aside, there is one group who believes the DPR–US brokerage firm Credit Suisse.  In a September 8 presentation entitled “Markets to Force Production Discipline”, they posit that Year-Over-Year natgas production in the US will be at negative 0.5 bcf/d by mid-November, and negative 4.3 bcf/d by mid March 2016.

And while analysts fret if this fall the US will hit the ceiling of its theoretical storage limit of 4.3 TRILLION cubic feet (Tcf), Credit Suisse is projecting next fall there could only be 1 Tcf by November 2016–when withdrawals from storage will happen.   There’s an outlier (and very bullish) projection for  you.

EDITORS NOTE—Jack Weixel and PointLogic Energy are hosting a FREE webinar on September 23 where they will outline their thoughts on how natgas will trade this winter.  It’s very rare to have a well respected industry consulting group do this for retail investors, for free!  SIGN UP! Here is the link: http://bit.ly/FREE-natgas-webinar