Home Oil EIA Oil Revisions Are Bullish–if You Include This

This week the EIA released the first look at its new method for reporting United States crude oil production.

First, the EIA’s prior method had been significantly overstating U.S. oil production so far in 2015.

Second, U.S. production appears to have started declining back in April.  This is what everyone in the industry has been saying for months; the EIA was seriously out-of-consensus on their old numbers.

Both of these revelations are somewhat bullish for oil prices. I say somewhat because OPEC production was up 100,800 bopd in August up to 32.3 million bopd, wiping out the new EIA production drop.

But the EIA does show US production is lower than thought and went into decline way back in April.  Despite the Market knowing these EIA numbers are at best educated guesses, it tends to put a lot faith and trust–and A LOT of trading dollars–in them.  So these numbers are still important.  And as I show below, the trend change is clearly in. 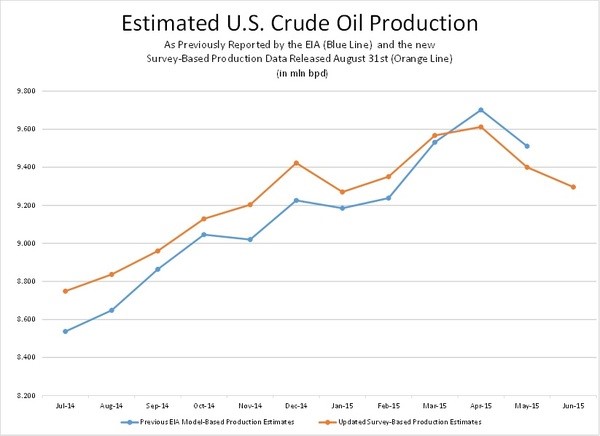 What Changed In The EIA’s Reporting Methodology

The new reporting method has resulted in revisions being required for the months of January through May.  The old method was….to say it politely…not suitable for today’s rapidly changing environment.

The problem with the old method was a lack of timely information. Essentially, it was an estimate of U.S. oil production based on tax information and other data obtained directly from various state agencies.  The source of the data wasn’t the problem that made it inaccurate.  The problem was that at the time of the EIA report publication much of the information was incomplete.  Therefore the EIA did the only thing that it could do, it made a reasonable estimate based on recent trends.

In its memo detailing the changes that have been made the EIA itself explained the problem.  Under the old method the EIA said that the delay between when production happened and when data was fully complete could be from several months up to an entire year.

Instead of accurate actual data being used in its reporting, the EIA had to rely on a great deal of estimation.  When production levels really weren’t changing much that wasn’t a big deal.

However when at major market inflection points, for example rig counts dropping by a stunning 60% in a very short period of time, those estimations can be difficult to make accurately.

Under the new methodology the EIA is collecting data directly from a sample of operators of oil and natural gas wells in 15 separate major producing states as well as the Gulf of Mexico.  The EIA believes that this will greatly improve the accuracy of its reporting since the survey will cover more than 90% of the oil production in the United States.

2015 U.S. Production Had Been Overstated And Is In Decline

The biggest overstatement of production was occurring in Texas where the EIA had production down by 50,000 bopd–but now their revised estimate has it down 150,000 barrels per day for the first five months of the year; triple the original downward estimate. 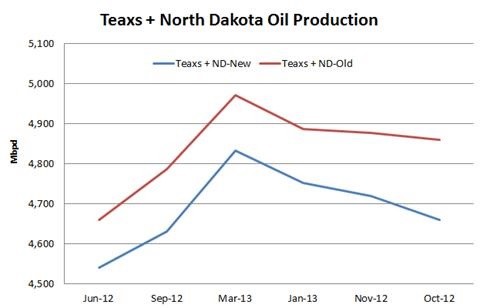 More important than the production overstatement itself is–the EIA’s new method shows U.S. production having peaked in April and headed into decline.  There have been some well-informed observers suggesting that this had happened, but the mainstream view was one of U.S. production being very resilient despite the rig count drop.

U.S. production in June is now reported as being 9.3 million barrels per day which is 100,000 barrels per day less than the revised May production level.  That is a big month on month decline, but the implications of what it suggests on an annualized basis could start to get the oil bulls excited.

You see, not only was the weekly EIA production estimates against industry consensus, they were against their own monthly Drilling Productivity Report (DPR)–which predicts where production in the major shale plays is going.  In recent months the DPR’s conclusions had been very much at odds with the EIA production numbers. The recent DPR reports have been projecting for several months that shale production was already declining.

The DPR in recent months had projected monthly production declines as follows:

The new EIA production reporting shows June production down 100,000 barrels per day which is well in excess of the 57,000 barrel per day decline that the DPR report had projected.  That does not seem out the question given that more than half of U.S. production still comes from sources other than shale (which is all the DPR covers) and that non-shale production could also very well be declining due to the drilling slowdown.

For the following months (July through September) the EIA’s DPR report suggests that shale production alone could be dropping by nearly 100,000 barrels per month.  If true, and non-shale production is also declining—just how much might U.S. production be down by the end of 2015?

Without a bounce back in rigs that decline would continue indefinitely into 2016 although at a slowing rate as shale decline rates lessen over time.

But there are a lot of very smart people—still in the minority—that believe the surplus is not close to that amount.   The EIA admits it can’t account for 1.2 million barrels of demand.

So if demand is dramatically under-reported and the surplus production is actually quite low—at the same time spare capacity is more limited…then that 600,000 bopd of US shale is VERY important to pricing–and could put the actual oversupply at just 200,000 bopd.

EDITORS NOTE–Oil is up or down 2-4% a day lately…but my largest position isn’t impacted much by the oil price.  It’s an energy company with no long term debt paying me a double digit yield.  That’s not a typo. And it just partnered with one of America’s largest companies. (You will be stunned at who this is.) Profit alongside me.  Click here.
Keith Schaefer