How to Win Bigger than the Bakken

In Part 1 I explained how Argentina’s Vaca Muerta shale is the only international play—so far—that looks like it could be bigger than the Bakken.

For investors, the challenge is that most of the activity in Argentina today is controlled by major companies. Names like Shell, ExxonMobil, EOG Resources and Total. Those stocks are not the kind of pure plays that will give investors serious upside from a big discovery.

In fact, there’s really only one way to make a direct investment in Argentina’s shale today—through a junior firm that’s had the foresight to stick with the play since day one.

Madalena was a significant acreage holder in the Vaca Muerta shale back when the whole play was just an engineering pipe dream. The company grabbed nearly 300,000 acres of exploration blocks here way back in 2007—at a time when even shale in the U.S. was just starting to take off.

That well was drilled into YPF’s Loma La Lata field, and completed (fracked) using fracking techniques of the kind that have transformed U.S. shale. The result was initial production of 250 barrels per day of oil—numbers that at the time were considered a major success in this new basin.

This kicked off a round of frenetic activity in the Vaca Muerta shale. Work that’s shown this formation to have some of the best petroleum geology on the planet.

For one, the shale is exceptionally thick—100-200 metres in the shallower, oily part of the basin and 1000 metres as it dips to west in the deeper gassier parts. It’s also very high in organic carbon—the stuff that sources oil. It has up to 12% “total organic carbon”, or TOC–similar to the peak values seen in mega-producing shales like the Marcellus.

As operators learned more, they realized the Vaca Muerta could be much more productive than first thought. They pushed to understand the rocks and optimize completion (fracking) techniques.

The result has been steadily increasing flow rates from new wells—and that’s evident in Madalena’s results over the past two years.

When the company completed its first test of the Vaca Muerta in early 2012, the well flowed 314 barrels per day. But just a few months later—in July 2012—the company tested its CAN-7 well at 1,340 barrels oil equivalent per day from a light oil reservoir sourced from the Vaca Muerta. That well showed the huge difference a little knowledge can make in emerging plays.

That learning curve is continuing–with recent wells showing even better performance. Two months ago, Madalena drilled its first horizontal well and it came in at 2,238 barrels of oil equivalent per day. That’s a quantum leap!

This sets the company up for a lot of development work ahead. Initial vertical test wells have already identified six separate light oil pools across Madalena’s acreage in a light oil reservoir sourced from the Vaca Muerta shale.

The Big Prize is the massive Vaca Muerta shale itself, and other tight oil or liquid rich gas plays like the Lower Agrio and Mulichino. The industry pays big to have this kind of stacked formations on top of each other that can be reached from one surface location (called a pad).

Madalena has an independent engineering report showing a best-case estimate of 34.8 billion barrels of oil equivalent in place net to Madalena across its three Nequen basin land blocks.

Projections on recoverable resources are currently pegged at 2.9 billion barrels of oil equivalent net to Madalena, of which ~2.0 bilion barrels are driven by the Vaca Muerta alone.

That’s a lot of oil, gas and natural gas liquids in the ground. And if horizontal drilling and fracking can produce the large amounts suggested by initial testwork, it’s easy to see how the Vaca Muerta could indeed become the leader in the international race for shale. 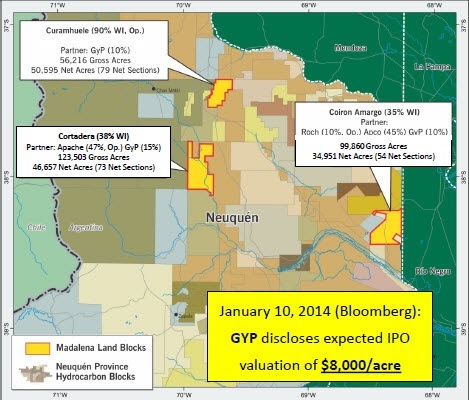 What’s It All Worth?

The key of course is—what kind of economics will producers like Madalena get when they start pulling Vaca Muerta crude out of the ground?

Here are some eye catching numbers: $8,000 an acre. GYP, the provincial (Nequen) oil company, will likely go public in 2014, and $8000 per acre is the Chairman is saying he’ll get for valuation. Note that GYP holds a 10% interest in all three of MVN’s blocks.

Mackie Research oil and gas analyst Bill Newman says: “If one applies the $8,000/acre value to MVN’s three blocks (135,000 net acres) it equals $1.1 billion. MVN’s Curamhuele and Cortadera blocks might not attract this valuation given the relatively earlier stage of appraisal.

“However, given the drilling and acquisition activity on and around the Coiron Amargo block, we believe that $8,000/acre for this block is a fair value, which equates to $280 million or ~ $0.77/sh.”

Just one asset–Coiron Amargo is the crown jewel so far for Madalena–is worth 77 cents, and the current share price for the whole company is 65 cents.

Analysts are also estimating that Chevron’s July 2013 joint venture with YPF is valued at $10,240 per acre, and roughly $48,000 per flowing barrel. That makes Coiron Amargo worth 99 cents a share for Madalena.

Energy Prices Are Moving Up; Costs are Coming Down

The government ‘s improving fiscal regime helps a lot. Producers are now able to receive an increased price for oil sold outside Argentina—solving the issue of low domestic prices. The fact that 20% of exports are tax-free also adds to the bottom line.

On top of that, Argentina has made recent moves to boost natural gas prices, to $7.50 per mmbtu, up from $5.

The other big part of the profit equation will be drilling costs. That’s where many other shales globally have stumbled—with high costs for drilling and completing wells eating up profits from the ensuing production.

But the Neuquen basin is a mature petroleum-producing region–so road access is good, and there’s a lot of pipelines and infrastructure already there. That cuts down on costs for bringing in drilling rigs, and for tying in production once wells have been completed.

The Neuquen also has a key drilling resource: water. In other parts of the world, fracking activity is limited by water availability. But the nearby Limay and Colorado rivers should help Vaca Muerta producers overcome this challenge, and avoid the high cost of sourcing far-afield water.

Parts are a big question for the Vaca Muerta. But the government is making a specialized industrial park just to service drilling and fracking.

All of this suggests Argentina has a legitimate shot at becoming The World’s Next Big Shale Play—with a billion-barrel prize for early developers.
The last thing to remember about Madalena—is management. CEO Kevin Shaw spent a lot of time in the field before spending some time as one of Canada’s top oil and gas brokerage analysts.

Ray Smith is the Chairman. Smith has set a new bar for Canadian management teams in attracting foreign joint ventures into his Alberta gas play, Bellatrix Explorations (BXE-TSX/NYSE). Madalena has the potential to do the same in Argentina, and with their assets in Canada.

It all creates some exciting blue sky numbers–and an obvious exit strategy with all the Petro-Majors involved in the Vaca Muerta–for investors to think about.

Next post: Why Shell Needs This Junior’s Big Play

Previous post: The Only Play on Earth Bigger than the Bakken