The Only Play on Earth Bigger than the Bakken

Argentina is the “Comeback Kid” story of 2014. After getting vilified for nationalizing one large ownership block in the prolific Vaca Muerta shale play in 2012, Big Oil is coming back in a Big Way—and dragging up the share price of the fast growing juniors in the play.

Most investors have forgotten that it’s the only shale oil play in the world that appears to be better than the giant US shale oil deposit in North Dakota and Montana—the Bakken. That’s right—more productive, more oil charged, and thicker—than the Bakken.  It’s located in west central Argentina, in the Nequen Basin.

Energy gurus Wood Mackenzie recently called Argentina’s shales the best in the world. And just this month, market strategists Lux Research named Argentina as one of the top spots to watch in the race to bring shale production to new lands. 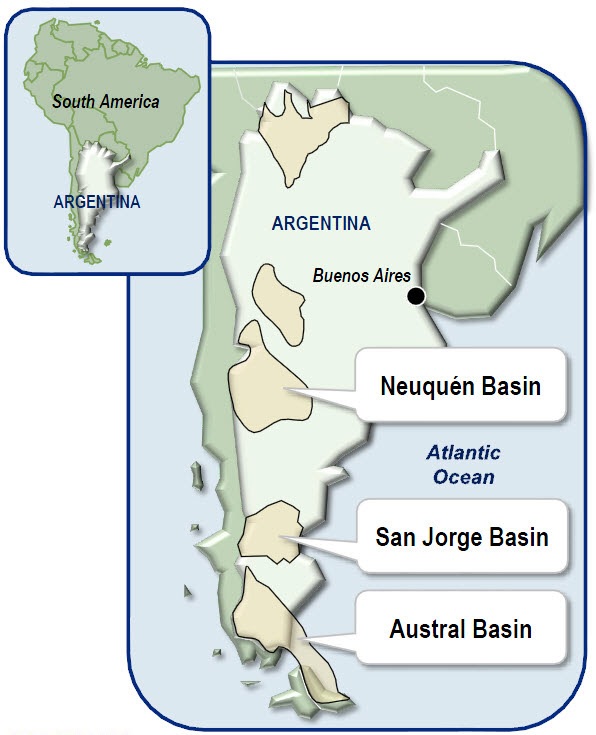 In 2012, Argentina became hot as a pistol in the junior energy markets—and then went from hero to zero as soon as the government announced it was nationalizing the shareholding of its National Oil Company, YPF, that was owned by Spain’s NOC, Repsol.

Stocks that had meteoric rises—came down to earth. The leading Argentine juniors had a bottoming period through 2013 but are now make their way back because Big Oil is pouring a lot of money into the Vaca Muerta shale.

And why are they doing that? Because, as the government said at the time, the Repsol deal was a one-time thing. And in the two years since then–while the Vaca Muerta translates as “Dead Cow”–the action there has been very lively.

The area’s biggest booster recently has been petro-majors like Shell, Chevron, Wintershall and Total SA.  Shell announced in December 2013 that it was increasing its capex three-fold, spending $500 million in the Vaca Muerta shale in 2014.

That’s a big outlay in a country that even a year ago was considered high-risk for incoming capital.

But Shell officials say that recent changes in the hydrocarbon sector have today made Argentina a great place to work. “Now we feel a different wind blowing and we are assessing our possibility to invest in exploring the resources,” said the company’s Argentina chief executive officer Juan Jose Aranguren.

What’s happened to change the tune of a big player like Shell? Several key developments—ones most investors haven’t yet taken stock of.

The Repsol deal was the biggest cloud hanging over the Argentinean energy sector—and caused a flight of capital out of Argentina’s oil and gas fields.

But after mulling this move for over a year, Argentina’s government seemed to realize they had done wrong. In November 2013, reports emerged that Repsol would likely be compensated for its lost oil and gas fields—to the tune of $5 billion.

That got the attention of international operators–especially as that came on the heels of another key regulatory development—a decision to allow producers to export up to 20% of their oil and gas output, tax-free.

The government also said it will remove foreign exchange controls for companies that invest over $1 billion in Argentina over a five year period, which most petro-majors are doing.  This addresses two major concerns that made the industry pause.

(That makes their cheap currency even more profitable for energy producers.)

Those changes were enough to bring big firms back to Argentina. In July 2013, Chevron finalized a deal for $1.2 billion in investment alongside local producer YPF.  That partnership is now producing 16,000 bopd from the Vaca Muerta shale.

Soon after, ExxonMobil and Apache committed to $250 million and $200 million, respectively, in local spending and Total SA announced an estimated $400 million pilot in the Vaca Muerta. All of this cash was earmarked for unconventional shale exploration and development.  Then in late 2013, Wintershall announced a three-phase joint venture in the Vaca Muerta shale for up to $3.3 Billion for a net 12,00 acres.
It’s attention like that led analysts Lux Research to put Argentina atop their list of global shale hotspots this month. The firm noted that all of the new “powerful government incentives” in Argentina make this one of the best destinations going for unconventional (tight oil) plays.

Despite the growing excitement over Argentinean shale, there’s an issue here for investors. How to play this emerging story?  That answer comes in my next story.  Stay tuned.

Next post: How to Win Bigger than the Bakken