Will Canadian natural gas producers fill up Canadian storage for the first time ever this year?  And does that mean Canadian gas prices completely collapse to zero? Who decides how much gas a producer can ship to market in that case?

Canadian gas storage market is very close to being full right now—much earlier than normal  in the gas injection season, which lasts from mid-spring to late fall.  Gas withdrawal season is from fall through winter and early spring, when heating demand uses much more than producers can bring upThis chart from Calgary’s ARC Financial Corp. weekly Energy Charts tells the tale: 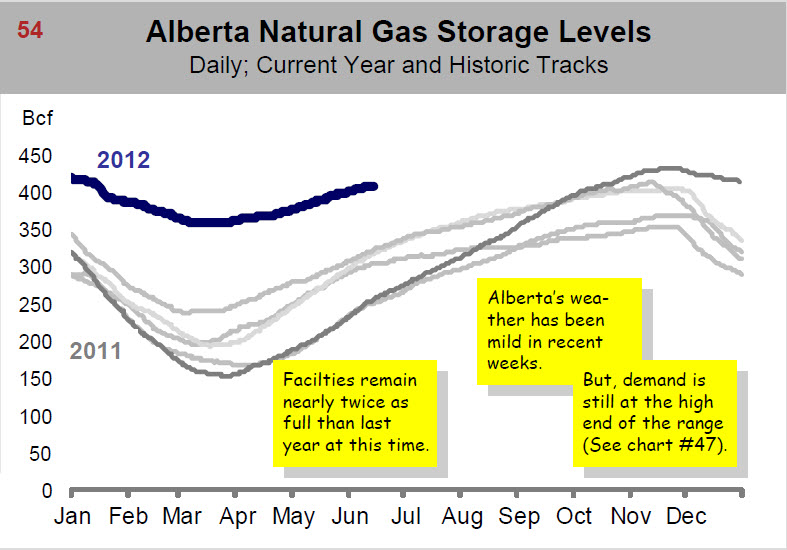 In the US analysts are talking about theoretical full storage just before withdrawal season starts.  But in Canada, the issue is more immediate—still hypothetical, but certainly still possible..

“If storage did get full, it would only be for 1-2 months in a worst case scenario,” says Geoff Ready, an energy analyst at Haywood Securities in Calgary.  “The market will correct itself but there could be some price shocks.”

Canada produces 12-14 billion cubic feet per day (bcf/d) of natural gas (down from 17 bcf/d five years ago), and exports roughly 6 bcf/d to the US at this time of year.  It currently uses 3 bcf/d in-country, for a total of 9 bcf/d.  That means roughly one third of Canadian gas production would need to get shut in, in a worst case scenario of full Canadian gas storage.

But even though only one third of the gas is shut in, that would take the pricing for the rest of the market down to an unknown number—potentially close to zero.  (Processing and transportation costs are already taking profit margins close to, or even under zero, for some Canadian producers.)

However, several trends are working in the Canadian producers’ favour recently.

But just like in the US, Canadian gas producers sometimes don’t really want to shut in production, says Ready.

“Economics should determine whether more production is shut-in, however optics sometimes win over economics.” He says some public companies don’t want to show a production decrease on their quarterly report and will produce or even drill uneconomic wells to avoid this.

To illustrate the optics effect he points to Whitecap Resources (WCP-TSX) as doing the prudent thing—reducing capital expenses (capex, the industry calls it), and lowering production guidance.  Economics says the stock should have gone up by doing the “right thing” in the face of weakening commodity prices —but it went down as much as  16% after its announcement.  (Whitecap is even one of the junior market darlings.)

Another sign Canada is getting closer to full storage is that the Canadian AECO price differential is widening from the US gas price at Henry Hub (The US has several natural gas “hubs” where prices are set).  AECO was only 25 cents per mcf (thousand cubic feet of gas) lower three months ago; now it’s 50 cents lower.

But there’s a small likelihood of seeing huge gas shut-ins in Canada without full storage.  That doesn’t bode well for Canadian producers, as prices will continue to sink.  How low does the price go in advance of this?  Canada has already seen just over $1.60 per thousand cubic feet of gas (mcf). Processing and transportation costs can eat up most if not all of that for producers, leaving them with no positive cash flow just on operating costs.

If you amortize all-in costs per mcf, the industry needs triple that price to make money.

For now, full storage is theoretical, even in Canada.  But what happens to them when the underground storage caverns can’t hold a single more molecule of gas… and basically one third of Canadian production potentially can’t find a home?

“Some products, like natural gas liquids, get to market via rail transport.  Had the strike gone on any longer, we would have seen production curtailment mandated by processing facilities declaring force majeure.

“They tell you they will use their best efforts (to take whatever production they can) and (producers) have to shut in field production.  This strike was short-lived, so no impact to production was experienced.

“In the storage situation, the producer shut-ins mandated by facilities and/or pipelines would be similar.  Also, in the hierarchy of gas production the government would prioritize associated gas from oil wells over gas wells.”

Dave Haskett is the President of Alberta based Patriot Energy Marketing Inc. Junior and intermediate level producers contract with companies like Patriot to get the best price they can for their gas in the market every day.  He says the industry has been here before, but adds that everybody is watching storage in both Canada and the US very closely.

“In the event the markets for natural gas are increasingly limited, and storage facilities are full, then producers would be forced to shut in. Every producer and producing field has price points.  The decision to shut in wells or shut in an entire production field is based purely on the financial metrics of individual companies,” says Haskett.

“While we have not seen a situation where all storage facilities are completely full, we will, in all likelihood be going into this winter with storage at record levels.”

Haskett adds that the other significant impact will be to pipeline companies such as TransCanada Pipeline Company (TCPL) — whose mainline from Empress Alberta into the East has been well under its capacity.

“This was a terrible winter for TCPL in terms of its volume delivered into the Eastern Canadian and US markets. Looking ahead it would appear that TCPL will have another dismal year in terms of the utilization of its pipeline capacity unless we get a very cold and early winter.

“With respect to a completely full storage scenario in my 32 years we’ve never had a season where that happens.  We’ve never filled every cavern to the brim,” he says. He added, however, that if Canada gets a mild winter like the one just past, the storage situation “gets really ugly.”

Junior producers are the most vulnerable if they are weighted primarily to natural gas.  They will most likely be forced to shut in more production — particularly if their production is behind a third-party gas plant and the operator elects to shut the plant in due to economics, or the junior has a small working interest and his larger partner elects to shut in wells or a producing field.

For now, this situation is hypothetical. But it’s not a scenario that anyone in the industry wants to see occur. The impact is enormous for storage operators, pipeline companies and natural gas producers, which all employ thousands of people.