Home Investing The outlook for natural gas: the stocks with upside around the corner

Timing is everything in the market and being able to spot trends is critical for locking in attractive returns.

Natural gas producers have taken a beating over the past three years but there are encouraging signs that natural gas might be ready for a break to the upside.

Despite a seasonably weaker shoulder season, NYMEX prices are inching above 10-month highs and observers are finally buying into the idea that stronger prices are around the corner.

The International Energy Agency (IEA) said this week that natural gas is about to enter a “golden age” with world-wide gas use to increase by 50 per cent by 2035.

That might seem far away, but the immediate present has also been encouraging of late.

All the while, US industrial demand growth is the highest in a decade, according to the Energy Information Agency.

Add some hot weather in big consuming markets and we’ve seen a nice steady rise since May.

FirstEnergy is a boutique brokerage firm in Calgary specializing in oil and gas.  Their analyst Martin King said Tuesday that a longer-term average gas price of $5.50 is “reasonable” heading into 2012, although his own 2011 forecast still calls for an average of $4 for the year.

The difference between the two numbers sums up the opportunity in a nutshell–almost 30 per cent on price alone. It’s not unreasonable to expect stocks to follow suit with higher multiples and valuations.

Unfortunately the pure play gas producer has become an endangered species and it’s hard to find a lot of names with growing production exposed to rising spot prices.

The good news is that the producers that managed to stick around over the past three years are bonafide survivors. They’ve taken a beating and still managed to be profitable through the down cycle.

In fact, many have thrived and have quietly posted nice share price appreciation. (See our story on the Surprise Junior Stock Performers)

Although some, like Birchcliff Energy (TSX-BIR), are near 52-week highs, there could be even bigger upside around the corner. In fact, there WILL be more upside with higher gas prices.

The company has been furiously developing its Montney play in Alberta and says it can still make money at a natural gas price of $3/mmcf . The company has posted positive earnings for nine consecutive quarters and has all of its production un-hedged to sell into a rising market.

It’s spending more than $260 million this year to double its processing capability which will give it room to ramp up volumes.

Peyto Exploration (TSX-PEY) has been in the wilderness forever it seems, but it is also testing year-highs. Both companies have made solid share price gains Peyto alone has quadrupled since the market low in 2009.

Crocotta Energy (TSX-CTA) is another survivor that was forced to sell assets and recap the company in September of 2009.

Since then its share price has doubled while it works liquids rich gas near Edson in central Alberta.  Liquids are in big demand in the heavy oil patch and amounted to almost a third of Crocotta’s first quarter production. Notably, Tourmaline (TXS-TOU), which just bought out Cinch Energy (TSX-CNH), is just to the west of them.

Advantage Oil and Gas (TSX-AAV) posted a small loss of three cents in Q1, which wasn’t bad considering it spun off its oil assets to focus on its core Montney development. It has 28 million cubic feet a day hedged at Canadian prices of $6.25 a gJ, which will protect the balance sheet until a full-blown recovery takes hold.

THE NEXT 6 WEEKS WILL BE CRITICAL

I’m convinced the next six weeks will present some of the most extraordinary buying opportunities ever seen in the oil and gas markets.

At this very moment, there’s a tidal wave of change that is sending shockwaves thoughout the industry.

And as a result…a handful of companies will provide early investors with some astounding profits.

Let me show you how you can claim your share of these profits – and what simple steps you should take right now to take full advantage – in my FREE special report.

Looking even longer term, big players like Encana, Apache and EOG are looking at exporting LNG, or Liquid Natural Gas, off the West Coast of Canada.  Natural gas prices in Asia are about double what they are in North America, and even after shipping costs producers will be making a lot more money selling gas in Asia.

But smaller players have bought in as well.  Earlier this month Progress Energy (TSX-PRQ) teamed up with a Malaysian company, Petronas, one of the world’s largest LNG companies, to develop unconventional gas and build a second LNG export terminal in B.C..

These are huge multi-billion dollar investments, and the risk is all going to be project execution and raising enough money to stay in the game. Having a huge multi-national for a partner is a huge plus in that regard. But this is definitely a five-year payback; patience is the key here.

But it suggests things are looking better in a previously dead-end sector with nowhere to go but down. Six months ago, few if any analysts gas prices would be close to $5/mmcf in North America – almost everybody was predicting lower prices.

It remains to be seen if this is a sustainable recovery for producers and their investors. Timing and finding ways to profit from a rebound will be the test. 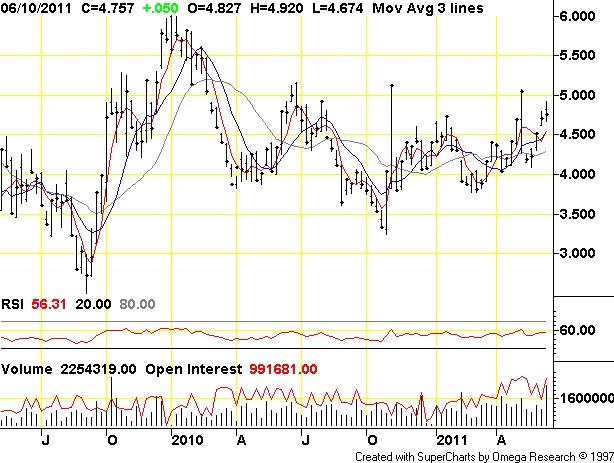