A couple quick thoughts on today’s Big Oil News – the IEA releasing 60 million barrels from Strategic Reserves around the world to help lower global oil prices – before I get into who will benefit from this (and there’s a surprise here).

In terms of fundamentals, this really is a cry for help.

a. 60 million barrels equals about 18 hours of global production – hours, not days or weeks. It’s inconsequential.

b. The world is already well supplied with oil – there is no shortage of oil anywhere on earth that I can see.  North America in particular is overflowing with oil.

c. Oil doesn’t trade on its fundamentals, or it would be $60-$70 a barrel right now. Or pick your own number.  But it would be lower.

In terms of market psychology however, the IEA may be smarter than the pundits think.

Oil, like all markets, trades on fear.  And there is now so much liquidity in the world that often (if not usually) the tail wags the dog in commodity markets.  What I mean by that is that the financial derivatives surrounding oil – the ETFs, the futures contracts etc. – help determine the price of commodities as much as the underlying demand.  So managing their fear and greed of investors in those products is a bigger job than ever before.

With this new reality that has developed over the last decade, but especially since QE1 & QE2, I would suggest the governing elites of the world (DAD) need a new way to communicate to the capital markets (MUSCULAR INDEPENDENT TEENAGER) to really get their attention that they will pull out all the stops to obtain a semi-permanent lower oil price.

But what it could do is convince many of the new entrants in the futures market to dump their “oil long” holdings.  Speculators have been buying oil long contracts in record amounts up until a few months ago. See this chart from Canadian brokerage firm Canaccord Genuity: 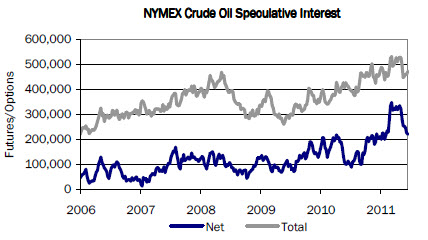 Now, the chartist in me says that after a recent round of weakness, a dive in oil prices will weed out the latent longs – cause them to give up hope.  And then the liquidation of ETF holdings, of futures contracts, begins in earnest and causes a waterfall effect on oil prices.

If/when that speculative liquidation happens, trend lines get exacerbated – things go up higher than fundamentals would say they should, and go lower than what fundamentals indicate.  So I suggest that when oil traders and other market players say oil is going HERE, wherever here is, you can likely count on it going 10% past that.

That’s the tail wagging the dog, and why we have so much more volatility in the commodity markets now.

So in one sense, this chart tells me the timing of the IEA announcement was perfect, if they were targeting a large part of the market – the speculators.  They’re saying we will do everything we can to keep oil lower for longer than you think, this lower oil price scenario is not short term, so you will lose money on your trade.

(I have this mental image of the head of the IEA saying to oil long speculators – SOLDTOYOUSUCKA!)

Perhaps the IEA was looking at fundamentals saying hey, there is no need for this oil price as supplies are plentiful and the western world’s economy is weak, so if we can just change market psychology a bit, we can get what we want – $80 oil.

One place is obvious, the other one is…counter-intuitive.

Certainly if you want lower prices, bring on more supply.  And that means more drilling, which should be music to the ears of investors in energy services stocks – the drillers and their sub-trades, like the fracking companies and the supply companies to them.

The energy producers of the world ARE increasing their spending to find new supply – a whopping 25% more in 2011 over 2010 to $133 billion, says US securities firm Raymond James.  Here in western Canada, producers will be spending 32% more this year over last, according to Canadian brokerage Wellington West Capital Markets.

But the strangest sector to benefit from lower oil prices, I think, will be junior oil stocks.   For the last two months the overriding psychology in this space has been backward.

That is – the oil price has to go down before junior oil stocks can go up.

Learn all about this company’s new fracking process – and how individual investors like you can capitalize on it – in this special video presentation.

Junior oil stocks were having the same inverse relationship to oil that the Dow Industrials were; a high oil price will cause recession so sell riskier and junior stocks – including junior oils.

The first clue that this thinking was affecting junior oil stocks was when they did not benefit from the last $20 move in the price of oil, up to $125/barrel.

Then as the Arab Spring did NOT move into Saudi Arabia, the world’s largest oil producer, the political risk premium came out of the global oil price, and oil fell back to $100.

But that was not enough for junior oil stocks to move again.  Partly that’s because it’s summer – many investors leave for holidays, and trading volumes dry up.  A lot of these stocks have raised hundreds of millions of dollars and now have hundreds of millions of shares issued – and need lots of volume to keep their share price up.  So in one sense, the value reset button has already been pushed on many junior oil stocks.

For over a month now I’ve been reading into the junior energy markets that until oil gets under $90 and stays there for a short while, the market is not willing to buy the juniors in such a wave that a rising tide will lift all boats like it did from September 2010 to March 2011.

So once the market is convinced the oil price will stay low enough to not cause recession, it will again buy the juniors, as even at $80/bbl these companies make GREAT money.  Some valuations will get reset (though much of that is now done), but the fast growing, discovery making juniors will once again get rewarded.