Home Top Stories The Outlook for Canada’s Oil Sands Production
With an oil pipeline to the west coast, Canada’s oil sands could be the big swing producer in the global energy market, says Ralph Glass, Director Energy Valuation and Operations of AJM Deloitte, an oil and gas technical consulting firm in Alberta.
But without a pipeline Canadian oil production could actually get shut in, he warns, as US oil demand is flat four years in a row and their Cushing oil storage facility in Oklahoma is almost full.It is a feast or famine future scenario for Canadian oil sands production.

“If we had alternative markets, Canada could possibly be the swing producer in the world, not the Saudis,” says Glass.  “We would have enough spare capacity that we could help fill the (world demand) gap and influence prices.”

Right now all western Canadian oil is shipped to one place: The USA.  Alternative markets means: Asia, via a pipeline to the west coast where tankers would transport it across the Pacific. 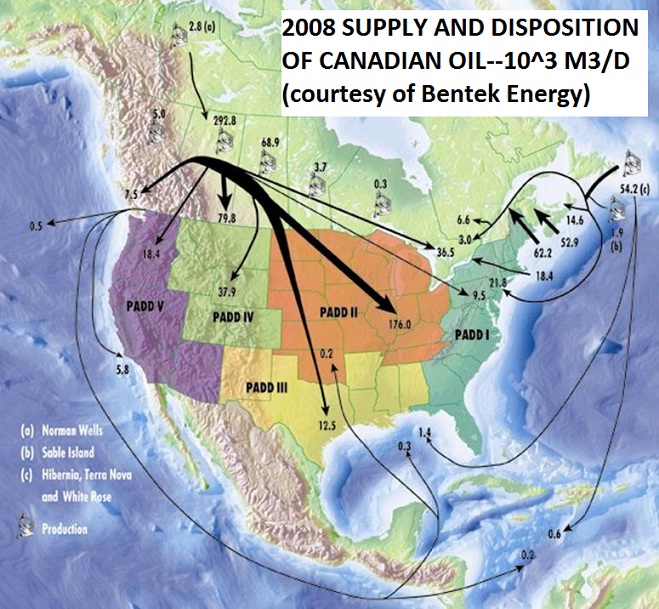 Glass points to the oil sands projects that are now on the table (you can see them all here: http://www.oilsandsdevelopers.ca/index.php/test-project-table/) which total over 7.5 million barrels a day of production (bopd), though much of that won’t be online for years.  Current oilsands production is roughly 1.5 million bopd.

All this oil supply will be great for consumers, and Canada’s economy (jobs and royalties) and for geo-political stability in energy prices.

But with the US increasing oil production for the first time in 40 years – thanks in large part to the shale revolution in the Bakken oil formation in North Dakota – Glass says there is a chance that the US might not need Canadian oil as much – in the same way he says Canadian natural gas is vulnerable to being shut out of the US market because of increased US natural gas production.

“There is more than ample (oil) supply in North America, so everybody is going to have to line up as take less, and they’ll have to produce less,” he says.  “And as with natural gas, the US will take their product first.”

He adds this problem is mostly long term, but there could a short term production glut in North America as soon as the next six-nine months.

“We’re coming into a lull now – Q3 is usually a slow point in world demand.  But then we see a dramatic increase in Q4 of 4 million more barrels per day of demand over Q3.  What I don’t know now is, can supply meet that increased demand in Q4/Q1 2012 in the world?

“If it cannot then this is a mute point – but if can then Cushing could get filled (and producers) may get their product reduced.”

Not everybody agrees with Glass’s concerns on Canadian crude.  Adam Bedard is Senior Director with Bentek Energy, an energy market analytics company based in Denver Colorado.

“Canadian heavy crude trades back about $20 from WTI, which makes it very competitive to bring to market.”

If any foreign crude gets shut out of the US, says Bedard, he expects it would be imports from Nigeria.

“I think Canadian crude squeezes out other crudes.  I would sure be surprised” if Canadian crude was displaced out of the US.  He added that doesn’t see Cushing ever being full – the builds in supply are slowing, and rail and pipeline capacity out of Cushing is being developed.

Bedard said he didn’t think that storage at Cushing will be the bottleneck, but there could be a limit on refining capacity which could push back on demand for Canadian crude – though the U.S. Gulf Coast refining complex has added capacity allowing them to refine heavy crude.

There is no stranded oil sands production right now, but Glass says that $20/barrel discount that Canadian heavy crude is getting compared to other world oils is costing the Canadian economy.  Assuming 1 million barrels a day of oil sands production going overseas, instead of down into the US, Canada could stand to gain about $3.65 billion for every $10/bbl more revenue it could get than it’s receiving now.

“Price and volume (of Canada’s oil exports) are being impacted without a pipeline to west coast.  We’re getting significantly less for our products than they could on the world stage.”

This chorus is getting louder.  Scotiabank’s head commodities analyst, Patricia Mohr said in a June 28 note that “In my view — given the substantial forecast growth of Alberta oil sands production in the next 5-10 years… in the face of only limited U.S. consumption gains — building further export infrastructure… to the B.C. Coast to reach fast-growing Asian markets is vital for the Canadian economy.”