The Alberta Bakken has gained a lot of visibility in the last month, but how quickly will events on the ground develop?  And where can retail investors profit the most from this new play?

This hot new play is being touted as a probable look-alike for the Saskatchewan-North Dakota Bakken.  But there is very little public information to back up these claims, as no well rates have been announced on the Montana side of the play, and only one well on the Canadian side.

That could soon change, however.   GMP Securities reported that Crescent Point (CPG-TSX) was issued licenses to drill two wells – one license on October 29, the other on November 5 –  into the Alberta Bakken.  One will be at the north end of the play on the Alberta side, and the other in the south very near the Montana border.

Crescent Point is arguably the most respected and most successful Bakken producer in Saskatchewan, and trades at one of the highest valuations of any producer on the Toronto Stock Exchange.  Their presence in the Alberta Bakken in such a big way is a good omen for the play.   They were able to acquire over 1 million acres in the play; almost all of it via purchasing a distressed private company out of receivership – for only $96 million, which included 900 bopd production.

You could say the land was basically free or if you don’t back out the production the cost was around $10/acre.  Recent land sales have attracted bids as high as $1500 an acre.  So the Alberta Bakken has the potential to be extremely accretive to CPG – if it works. Crescent Point plans 19 wells into the Alberta Bakken in 2011.

GMP says one of the best positioned juniors to benefit from this new play – and Crescent Point’s activity – is Bowood Energy (BWD-TSXv).

“We view any incremental drilling activity that helps prove up the play as a positive for Bowood Energy” GMP states, “who’s lands are clearly on trend with the two latest wells licensed by Crescent Point.  We continue to view BWD as one of the best levered ways to play this new light oil development.”

Bowood has partnered with the Blood Tribe First Nation in southern Alberta for much of their land – they have 94.75 contiguous sections (60,640 acres) there, and total Alberta Bakken acreage of 162 sections (104,000 net acres). Bowood intends to drill its first horizontal oil well into the play by late 4Q10 or early 1Q11.   Macquarie Capital says Bowood “has no sizeable expiry issues to deal with across their land base in the near term” so they can take their time drilling.

DeeThree Explorations (DTX-TSX) says they have 300 sections (in this area of Canada that’s one square mile) of prospective Alberta Bakken lands.  Haywood Securities says they have half of it in the main fairway of the play, and that the company will drill 3 vertical wells by the end of 2010 to test some of their ground.

Neil Roszell’s Wild Stream Exploration (WSX-TSXv) has just over 30,000 undeveloped acres in southern Alberta right along the Montana border – very close to where Rosetta is drilling on the US side – and has identified 15 net conventional drilling locations.

BLACKSTEEL ENERGY (BEY-TSXv) has 2,530 net acres that is prospective for the Alberta Bakken.

On the US side, Primary Petroleum (PIE-TSXv) was one of the early movers in the play and has now assembled more than 230 net sections, President Mike Marrandino says.

(I alerted OGIB subscribers to Primary Petroleum at 16 cents a share in May 2010 because of their large land position in this play, and I am now taking partial profits – over 500% in six months!)

Primary intends to find a partner for their large land position.  This is not unusual for juniors in emerging shale plays – I have written about the Paris Basin shale play in France, where junior producer Toreador Resources (TRGL-NASD, $14.48 and another OGIB portfolio pick at $8.81 only two months ago) brought in Hess Corp (HES-NYSE) to joint venture 50% of their play – for a whopping $265 million.

Murphy Oil (MUR-NYSE), Rosetta Resources (ROSE-NASD), Quicksilver (KWK-NYSE) and Newfield Exploration (NFX-NYSE) are the larger producers on the Montana side of the play.  Rosetta has publicly stated they expect 12-13 million barrels of oil per section.  Newfield has said they now have one horizontal well producing from the play – they just didn’t give an IP rate.

Rosetta and Newfield have  been the most active in the US side, with each drilling about eight wells this year – most of them vertical test wells, or “strat” wells as the industry calls them, to test for rock stratigraphy – a geological term that means studying how rocks are laid down; studying the layers of rock.

Covenant Resources (CVA-TSXv) and Mountainview Energy (MVW-TSXv) are also active in the US side – Covenant will be spending $3 million in 2010-2011 to drill at least eight vertical test wells on their 41,500 acres (64 sections; 640 acres in one square mile).  In their corporate presentation, Mountainview says they own 74,000 net acres in the Alberta Bakken and will be spending $5.8 million there in 2011.

Macquarie Capital says in a report dated October 18 2010 that shareholders in these juniors could be happy as they get bought out by more senior companies looking to get involved in the play:

“…Consolidation. Junior companies with meaningful, strategically situated lands will be purchased outright by mid/large cap producers who seek to bolt on additional acreage to already established positions. The potential exists that players who were late to the game may try to establish a position in the play via a small corporate acquisition, once some of the associated risks have been mitigated by the early-comers.

“Farm-ins. We believe some select junior/midcap companies will execute strategic farm-ins on super-major companies or freehold owners as they look to either expand their land position as an early-comer or establish a position as a player late to the game.”

Of course, this is music to the ears of junior oil and gas investors.  This is what we do – find early entrants with big positions in good emerging plays, and (pray they work) wait patiently as the play develops and we get bought out for a premium by a larger company. 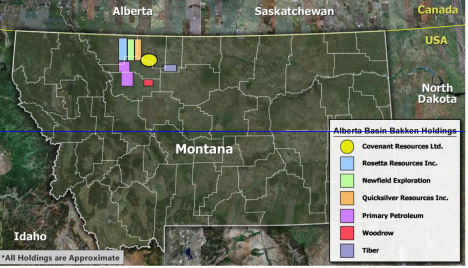 Part I of the Alberta Bakken series, please click here.

Publisher’s Note:  Many of my readers have emailed me to ask what my # 1 energy trade is.  That’s an easy one to answer at the moment.  It’s a little-known Canadian company with an extraordinary new technology… one that will shape the oil & gas hydraulic fracturing (fracking) market for decades to come. This company’s proprietary process is proven to increase production in wells by 40% or more — while it literally “pays for itself.”  I’ve put together a video that details this trade in full. Watch it by following this link.
by +Keith Schaefer