Natural gas prices continue to bounce on the bottom of their recent price range, yet natural gas stocks charts are looking bullish – which means the market really does believe that the sharply lower rig counts across North America will mean a (sharp?) increase in natural gas prices sometime later in 2009.

Storm Exploration is 92% gas, and is consistently one of the top recommendations of the many research reports I read weekly from Canadian brokerage firms.   Production is focused on the Montney tight gas play in British Columbia and Alberta. It has one of the lowest finding costs for oil and gas in the industry.  Underneath Brian’s technical analysis, I have included the highlights directly from their latest quarterly.

Storm is one of a handful of natural gas producers, with a track record of success (mgmt has built and sold companies before), that  investors should be tracking if they believe natural gas prices will rise this year.

Brian nor I own stock in Storm; he just finds charts he likes and does the technical analysis.  Storm is not a portfolio purchase for Oil and Gas Investments Bulletin.  I enjoy his write-ups and hope readers do as well. 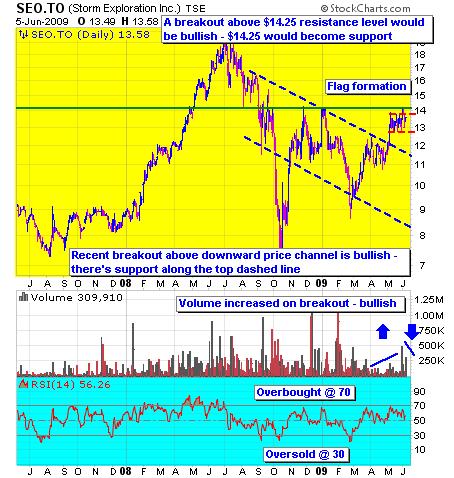 The stock chart for Storm Exploration Inc. (SEO-TSX, $13.58) looks bullish with a recent breakout from a downward price channel marked by the blue dashed lines in the chart below.  Importantly, the breakout achieved a minimum 10 per cent move above the top dashed line and was accompanied by increased volume, which confirmed the breakout.

Storm’s share price faces resistance at about $14.25, which is the price level marked with the green line.  The share price has started to consolidate around the $13 to $13.50 level and should find support at the top of the downward price channel, currently at about $12.

The stock price has started a flag formation marked by the red dashed lines, which is a bullish pattern.  Such patterns are called half-mast formations since the initial move is normally 50 per cent of the total move over a relatively short period of time.  With Storm, the price moved from about $12 to $13.50 for an increase of $1.50, so the share price could potentially move up to $15 from $13.50 in short order.  However, a move to $15.70 is required in order to confirm the breakout (i.e. 10 per cent above the $14.25 resistance level) and $14.25 would then become a support level.

Brian Hoffman, CA, CPA, is an affiliate of the Market Technicians Assoc. and a member of the Canadian Society of Technical Analysts (E-mail: bk.hoffman@rogers.com) 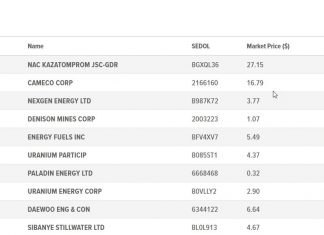