I subscribe to Steve Saville’s “The Speculative Investor” (www.speculative-investor.com) and find his twice weekly column very interesting.  He has given me permission to share this last weekend’s article on natural gas and natural gas stocks, which mirrored my thinking almost exactly.

After reading this article, please go check out his site.  He is based in Asia.  He covers stocks from all resource sectors, mostly juniors, and I find his macro overview to be very interesting.

The first chart shows that the oil/natgas ratio (the price of oil relative to the price of natural gas) hit a new multi-year high — and perhaps a new all-time high — last Friday. The ratio would be around 6 if oil and natgas were trading at their energy-equivalent levels, so with the ratio near its current level of 22 it means that oil is effectively trading at a 250% premium to natural gas.

When markets move way beyond rational valuations and stay there for a prolonged period, people will become accustomed to the new valuation level and explanations will emerge as to why the new valuation really does make sense. However, a while later it will be discovered that the new valuation was as nonsensical as it originally appeared. 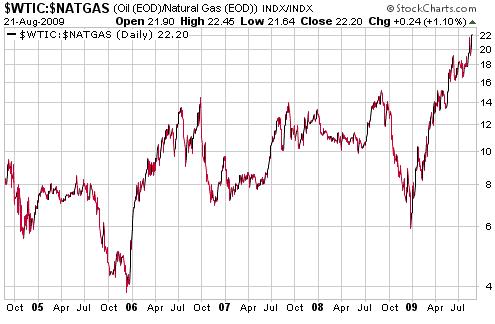 The second chart shows that the XNG/natgas ratio (the price of a basket of natgas-related equities relative to the price of natgas) hit a new multi-year high — and quite likely a new all-time high — last Friday. That is, it shows that natural gas stocks have been doing much better than the underlying commodity (to put it mildly).

Clearly, stock market participants are convinced that the price of natural gas is slated to move much higher over the coming 12 months. We agree, but we are concerned that a doubling or tripling of the natgas price is already discounted in the current prices of natgas equities. 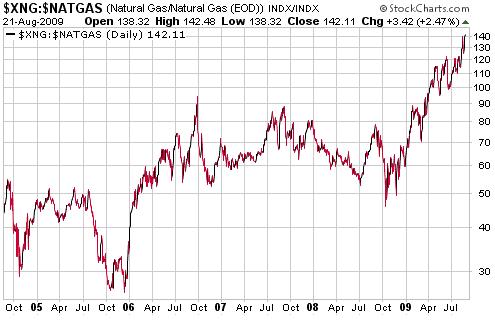 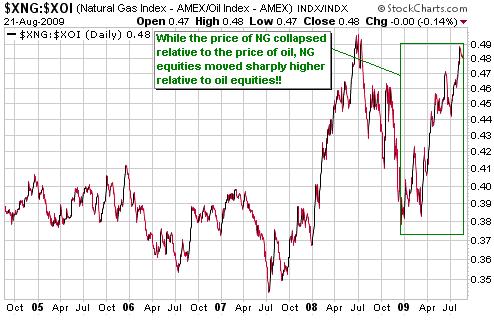 Further to the above, there is a lot of downside risk in natural gas equities right now. We were buyers of natgas stocks in late February and early March (as noted in TSI commentaries at the time) and then scaled back to our core exposure to this sector during May (as also noted at the time). Our core exposure is, by definition, the minimum exposure that we maintain while we are long-term bullish, but our concern about the downside risk in natural gas equities has us looking for opportunities to either replace equity exposure with direct commodity exposure (via a natural gas ETF) or hedge via put options on natural gas stocks (FCG put options, for example).

Two things to consider: First and as explained in a previous commentary, seasonality and the effects of contract rollovers could make the second halves of September and October the optimum times to accumulate an ETF that tracks the natural gas price. Some money should therefore be kept in reserve for this purpose. Second, the possibility that impending government regulations will restrict the number of futures contracts it can hold has recently prevented the United States Natural Gas Fund (NYSE: UNG) from issuing new shares to meet increased demand, the result being that UNG now trades at a substantial (15% or so) premium to its net asset value. This effectively makes UNG ‘unbuyable’ at this time. Until UNG’s market price drops back to near its net asset value, the Canada-listed Claymore Natural Gas Commodity ETF (TSX: GAS) would be a better way to obtain natural gas exposure.