Investors should take away two angles from this story.  One is that the supply in Liquid Natural Gas (LNG-I will explain what this is in a minute) is increasing dramatically around the world, and it’s likely that it’s all coming here, to North America – because NA is one of the very places on earth that has the geology to store it.

The second point is that natural gas is going to be so abundant, so cheap, and now so global –  it can now be shipped around the world like oil with LNG ocean tankers – that it could replace oil in much of our everyday lives, particularly transportation and heating.

This would be many years in the future, but natural gas could be a distruptive technology.  It could be the hydrocarbon of choice for the entire world for much of what we now use oil for.  And Mr. President Obama?  it’s clean – well, it’s a much cleaner burning fuel than oil.

First, what is LNG? It’s right out of science fiction. You cool natural gas down to -160 degrees Celsius,  or -260 degrees Fahrenheit, and not only does it turn liquid, it reduces in volume 600 times.  LNG is 1/600th the volume of regular natural gas.  It is now shipped from continent to continent in tankers (see picture below) in that condensed form.  When it reaches port, it goes into a special LNG terminal, is heated up to normal and ready to go into a pipeline.  It is cryogenics that could have been used on Han Solo in Star Wars. 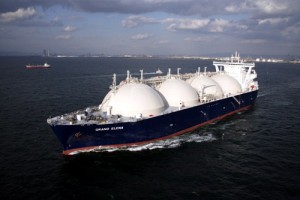 LNG is not yet a big factor in the US market, counting for some 3% of its use.  And because of all the low cost, abundant shale gas discovered in the last few years, it is unlikely LNG will ever be needed much here.

But it’s still coming to North America.  This is bearish for natural gas prices here.

LNG terminals are being built around the world, especially in Asia.  The four big countries in LNG are Russia, Iran, Qatar and Indonesia.  RBC Capital Markets estimates global LNG production will increase over 30% in the next two years, or just under 10 billion cubic feet per day (bcf/d). All the shale gas in the US has increased production there by the same 10 bcf/d since 2002.  So the new LNG supply is the same as adding 3-4 major shale gas plays.

One important thing to note is that governments are big players in these LNG infrastructure projects that cost billions, and they need money for social services.  So LNG infrastructure will not get turned off during a regular price downturn at the bottom of a business cycle.  It will keep producing and shipping except under real economic duress (though we have had some of that lately!)

Qatar, for example, basically has a zero cost on its LNG, because of byproduct credits – other natural gas liquids in the mix. This means that the money Qatar makes on those other liquids pays for all the costs associated with the natural gas. While shipping and freezing/thawing the gas does have a cost, the point is the increasing new supply is fairly cheap gas by recent North American prices (RBC estimates $3-$4/mcf).

And now with demand for this new supply dropping dramatically due to global recession, it has to go somewhere.  North America is one of the few places that have old depleted fields into which the gas could be injected and stored (we do this every year with our own gas) and depleted salt domes, a geologic formation in which natural gas could be stored.

So even though we don’t need it, it may end coming here because we are the only people who can store it – even if prices are higher elsewhere on the planet.  That would put downward pressure on North American gas prices.

HOWEVER, that whole story doesn’t interest me as much as point #2.  Of course there are a lot of hurdles and what-ifs, but natural gas is now:

-and can be made so cheap,

-and transported so easily around the globe now,

-and has environmental benefits over oil…why couldn’t it become a “disruptive technology” several years down the road?

Some Asian cars are now using natural gas.  All it would take is China or India (or President Obama) to say, hey, we are going to incentivize research and development of using natural gas for transportation.  (That would cap the oil price….)

Hmmm…low cost, “green” fuel, abundant…of course this would be many years in the future.

But I’m certain you are going to start to hear a lot more about this.