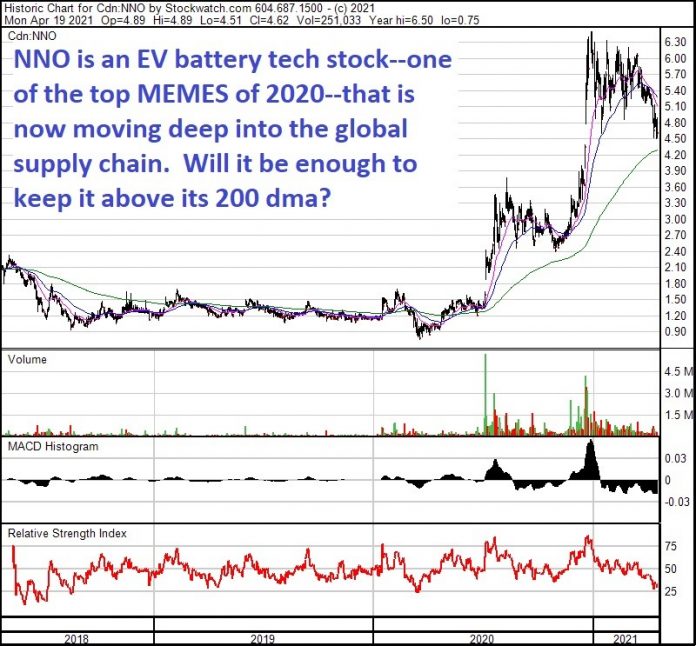 The EV battery of the future may have just got a lot cheaper, charge faster and be more environmentally friendly, thanks to Nano One Materials Corp. (NNO-TSXv/NNOMF-OTC).

What this means is that Nano One and the big Asian company tested NNO’s unique cathode chemistry—which uses no cobalt and very little nickel—and it passed a huge array of tests.

These would be tests like (and I know this from previous chats with the team over the last two years):

“When you’re testing the materials, you’re looking for does it have the capacity?” Dan Blondal said in an interview this morning. “Can you cycle it? So each cycle being one tank of gas.

“And is it economically viable? So the materials that are going in and the process being used to work on it, is it going to be economically viable? And then ultimately, how quickly can you charge it and discharge it? And this material in particular is very fast charging.

Blondal wouldn’t say exactly what their milestones or achievements were, but they were positive enough to move into commercialization discussions with their un-named partner (first announced last August).

The Market could see that their IP with the higher voltage—which makes the battery much more efficient—has a good chance to be globally adopted.

NNO already has a named deal with Volkswagen, and openly says they are working with MANY global automakers, their OEMs and power tool companies, among others. By the way, VW said in its Power Day presentation a few weeks ago that the LNMO chemistry–there’s actually three chemistries that are being used–(LFP (cheap safe/low range) and NMC (luxury long range/expensive) are the other ones) was front and center for them.

NNO uses a solid state LNMO technology; there’s no liquid electrolyte and that was the big problem with it in the past. NNO is the first company to make LNMO work in a conventional battery.

“This batter technology certainly charges faster and punches a lot of power,” says Blondal. “And it’s cheaper. Literally the key things are is that it’s got the higher voltage and better power, it charges faster, and it’s basically got no cobalt and not much nickel in it. So it’s a relatively inexpensive battery.

Blondal knows there is still a lot of work to do—in fact he almost goes out of his way to make sure people understand that this is a big step, but there’s more work to do. It’s not a commercial technology yet. No battery yet uses this.

But they are the world leader at this point. They have a proprietary method of making the next EV battery cheaper, fast charger and be more environmentally friendly—by not using as much nickel and cobalt.

“And then lastly, because it’s high voltage, it’s about 25% higher voltage than other cathode materials, so that actually has some interesting application, let’s say, in something like a power tool or even electric vehicles.

“You don’t have to string as many of them together to get the voltage. So you kind of simplify the battery pack.

“And because it’s higher voltage, you generate less heat. So thermal management gets easier.

“It’s more powerful and more efficient and ultimately more productive of a battery. So those are all the kind of the reigning characteristics of the material. That’s the whole package.”

Blondal said that this new stage of development would not increase Nano One’s burn rate–for now. But one of the reasons they wanted $30 million + in their treasury was for both negotiating power with partners, and for the potential to be an active partner, not just a royalty play on their technology.

I’ve always thought NNO has the potential to be a “unicorn” stock—and get a market leader’s valuation. While the overall market for that kind of stock performance may have passed (how many middle finger charts do we see out there?), the underlying technology here could get Nano One noticed by a much larger and more validating group of investors. 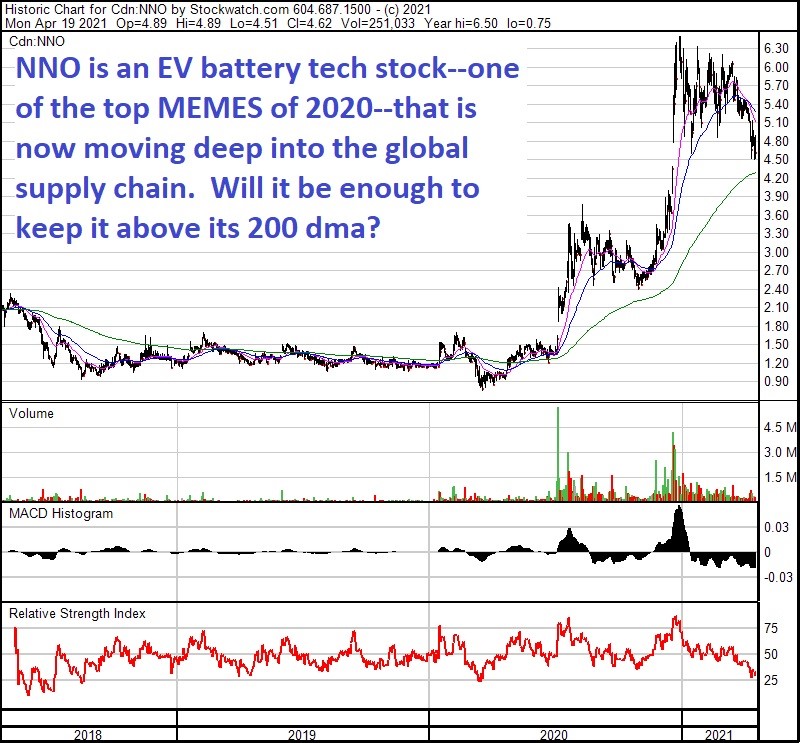