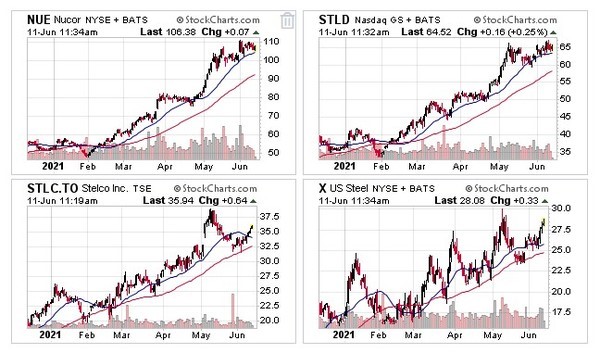 SPACs have gone through an entire market cycle in about 3 months.

The CNBC SPAC 50 index began the year on a tear, peaked out in mid February, based for two months, and, in the last few days, seem to be breaking out again.

Does that mean its time to look for the next great electric vehicle SPAC?

Uh, no.  I am going in a different direction on this one.

Let me introduce you to one of the oldest-newest public companies – Algoma Steel.  Algoma is going public (again) through a SPAC with Legato Merger Corp (LEGO – NASDAQ).

Once the merger is complete Algoma will be one of the cheapest steel plays out there.  And because it is a SPAC, there is a very interesting way to play the upside.

I will fill in the details shortly.  But first, let’s recap what has been going on in the steel market.

Steel prices have been going up like crazy this year.  Hot-rolled-coiled steel (HRC) prices in the U.S have topped $1,600 per tonne.  That is more than double what the 5-year average.

Overall, we maintain our view that prices are likely to remain well above historical averages for the remainder of 2021 and 2022. While we still assume prices will decline somewhat in 2H’21, our “higher-for-longer” view continues to push higher-for-longer.

Yet steel stocks are taking a breather.  After big moves over the first 4 months of the year, since mid-May the steelmakers have tread water.

I think what we’re seeing is the typical commodity response – as prices go up, multiples come down.  The old wisdom is to buy commodity stocks when multiples are high and sell when they are low.

That is the right thing to do – most of the time.  But BMO thinks the stocks are way underperforming their underlying businesses.

The stocks in BMO’s coverage universe are trading at about a 4x EBITDA multiple and change.

What’s my take?  At 4x EBITDA, with steel way, way above its long-term trend line, I think a lot of the meat is already off the bone.

However, if you gave me a multiple that is half that, well I would get interested.

Legato is an Eric Rosenfeld SPAC – he was one of the principles of Long-Term Capital Management – the hedge fund that almost cratered the world way back in 1998.

Legato completed its IPO back in January.  While some SPACs take their time to find a merger candidate (it can often be 2+ years), Legato did not.  Two weeks ago, Legato signed an agreement to merge with Algoma Steel.

Yes, that Algoma Steel.  Algoma is a 100-year-old company (117 years in fact).  It has been a Canadian institution with operations on the shores of Lake Superior in Sault St. Marie for longer than any of us have been alive.

Not surprisingly, Algoma has gone through tough times.  Algoma had to declare bankruptcy in 2015.

When Algoma exited bankruptcy 3 years later, in 2018, it emerged a much stronger company.

Algoma did not lay off a single employee during its time in bankruptcy, instead hiring over 300 new ones – an impressive fact.  But they were able to get employee costs under control.

Through the bankruptcy process they were bel to cap their pension and health care obligations which had hung around their neck like an albatross, replacing them with capped payments tied to profitability and cash flow.

With the new structure Algoma can forecast cash flow and plan growth.

Algoma raised capital coming out of bankruptcy, $300 million, and used it to modernize the business.

As a Canadian institution and large employer, Algoma has also been helped by the Federal government.  The Feds contributed $150 million in grants in 2019 towards improving productivity and implementing new technologies.

Make no mistake, Algoma may be an old company, but this is not some old and poorly run steel operation.

Algoma operates a high-tech facility that already has best in class costs.  In fact, Algoma’s operation is right at the bottom of the cost curve for North American producers.

But Algoma is only getting started.

Algoma plans to use the $300+ million of cash from the merger – this includes $200+ million from the SPAC and another $100 million from a PIPE investment which I have heard is very well subscribed for – to convert their line from a high-emission blast furnace mill to a low emission EAF mill.

The EAF mill uses scrap metal instead of iron ore and coking coal.  As a result, the conversion will make Algoma one of the lowest carbon emission steel producers in the world.

But this is about more that just carbon.  The mill will also increase capacity by 30% and reduce costs – adding $150 million in annual EBITDA when it is completed in 2024.

Most important, EAF steelmakers (Nucor (NUE – NYSE) being the prime example, trade at a healthy premium to their blast-furnace brethren.

Algoma currently sits with a cash position of $320 million (including the SPAC and PIPE cash) and debt of $485 million.  That net debt position of $165 million means Algoma is far from being levered bet.

The terms of the SPAC merger include layers of earnout shares for the existing Algoma owners.  Those earnouts are all based on this year’s numbers – if Algoma hits $900 million of EBITDA this year the full earnout will be achieved.

With steel prices at current levels that seems a given.  Assuming a full earnout there will be 153 million Algoma shares outstanding when it is said and done.  At $10 a share that is a $1.5 billion market cap.

Tag on the next debt and you are looking at an enterprise value of a little under $1.7 billion.

Here is where I become interested.  A $1.7 billion enterprise value on a stock that expects to do $900 million of EBITDA – that is less than 2x EBITDA.

The BMO steelmaker universe is trading at over double that.

There is no reason for Algoma to trade at half of what the rest of the steelmakers trade at.  If anything, they are in a better position than many of their peers – their pensions are dealt with, their debt is manageable, they have cash to expand and they operate in Canada with the lower dollar.

It sounds great so far, but here is where I become really interested.

Because Algoma is merging with a SPAC, the SPAC shares trade as units – shares plus warrants.  Those warrants also trade separately (LEGOW – NASDAQ).

Legato warrants are typical for a SPAC – they convert at $11.50 and are redeemable for 5-years after the merger is finalized.

A re-rating of Algoma to the average peer is enough to make those warrants very attractive.  The warrants have recently climbed to $1.60, but even at that price, if Algoma stock goes to $20, they are more than a 5-bagger.

I think that will begin to happen once the merger closes and brokerages begin to pick up coverage.

Notice that BMO does not have Algoma on their coverage list.  Of course not!  This was a private company until 2-weeks ago.  Brokerages won’t initiate coverage until the merger is a done deal.

But when that happens, I have to think the price targets will be $20+.

At that point, the stock will begin to re-rate.  It’s just simple math.

EDITORS NOTE—Rritual Superfoods (RSF-CSE) is ramping up distribution and sales of its products.  An independent research service—Market Radius—is hosting Rritual CEO David Kerbel next Wednesday, right after market at 115 pm Pacific, 415 pm Eastern.  Get the latest from Kerbel—use this link to access the webinar: