Home Latest Reports If Core Labs Is Going Down, Oil Is Going Up

Surprisingly…….the most bullish recent piece of news for the price of oil in 2020 DID NOT come from the Middle East.

Not that the massive escalation of Middle East issues with the killing of Iran’s top general isn’t hugely bullish news for oil.

However, the bomb that the oil service company Core Labs (CLB:NYSE) dropped on New Year’s Eve is even bigger and should have the attention of all investors — because it gives us a very clear view as to what is coming in the oil market in 2020.

Core Labs is #1 worldwide in reservoir tweaking–they’re in most every oilfield in the world and have one of the best views as to how oil production is going.  They’re right beside the oil producers in the field.  They know how much oilfields activity is declining or moving up before the public does.

And from what they told the Market–let me tell you friends–I haven’t been this BULLISH ON OIL STOCKS for a decade!

That last time I was this excited my portfolio was loaded with triple digit winners within six months.  The only difference is that this time energy stocks are even cheaper.

Ugly, Ugly, Ugly – Unless You Are Long Oil

Core Labs is an important bellwether, or more specifically a leading indicator, for where oil prices are going.

If business is bad for Core Labs, it is telling us that supply is likely to lower, and oil prices are going up.

And while the news isn’t pretty for Core Labs, it most definitely is pretty for oil bulls.

After releasing a press release on that day after hours……the stock opened a shocking 21% lower on December 31.

Core Labs didn’t disappoint the market, it shocked the market.

For a press release to have that kind of impact for a company this well known the news has to be more than bad, it has to be distressingly bad……as in far beneath what was believed to be the plausible “worst-case” scenario.

What Core Labs did was hit the market with a hat-trick of painful cuts (1):

Painful Cut #3 – Cut the amount they pay to shareholders, their sacrosanct dividend

Yep, they covered pretty much everything…….Core Labs told investors that most recent results are far worse than expected, results will get worse going forward and that they can no longer afford to pay the current dividend.

The cut to Q4 2019 earnings and earnings per share was 15%.  That is shockingly large considering that initial guidance came out almost a full month into the quarter at the end of October.

In two months business has fallen apart, and remember this isn’t a company that has walk-in traffic.

Customers must be backing out of agreed-upon-business for this kind of surprise to happen.

Just two months ago in management’s Q3 conference call with investors CEO David Demshur said this about the dividend:

“Core has no plans to cut our dividend as we review its importance to our investor base, especially our European investor base as being sacrosanct.” (2)

To go from calling the dividend sacrosanct to a cut–in just two months–requires a big-time worsening in future outlook.

Not to mention the crow that you have to eat after throwing around a word like sacrosanct and then immediately not living up to it.  If you want to lose the faith of the market this is a great way to do it……clearly the dividend cut is something the company felt it absolutely had to do.

Why What Core Labs Is Saying Matters So Much

Oil bulls should sit up and applaud this information from Core Labs.  Core Labs is the service company that is in everyone’s kitchen — they have a clear view as to what is going on with American shale and are telling us exactly what is going to happen.

If business is falling apart for Core Labs that means that American horizontal producers have hit the wall hard and that is BULLISH FOR OIL PRICES in the very near future.

If these companies aren’t drilling like crazy their production falls very fast, atrociously high decline rates have always been the Achilles Heel of the shale producers. 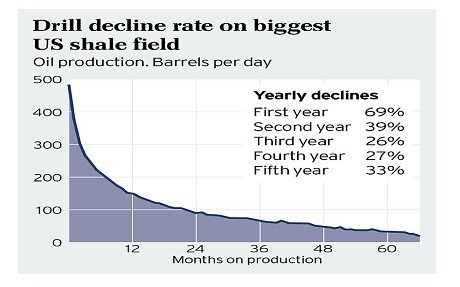 For months now we have been getting drips and drabs of information that U.S. oil growth may disappoint in 2020…..but Core Labs is suddenly seeing activity drop so much that they have contradicted what the CEO just said about the sacrosanct dividend and slashed it by more than half. 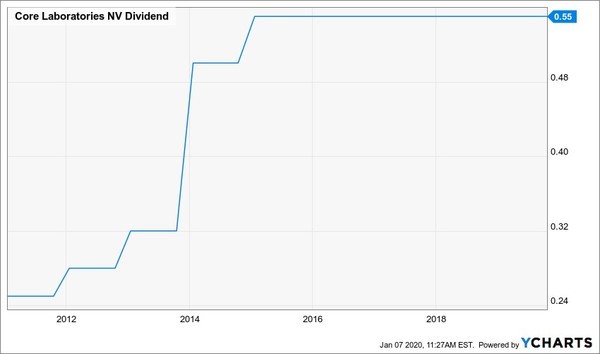 I would suggest they view the immediate future as being quite dire…consider that this $0.55 dividend held  through the entire oil crash in early 2016 when WTI dipped under $30 per barrel, and drilling activity collapsed.

That environment didn’t frighten the Core Labs Board of Director’s to cut the dividend but what is coming in 2020 does.  I would say that’s BULLISH for oil prices!

Perhaps the most interesting tidbit from this news release from Core Labs was this……..while management gave a multi-year outlook for international/offshore client activity they gave nothing specific about U.S. onshore Q1 guidance.

I take that to mean–they know it is bad, but they don’t want to go on record with a specific number for fear of having to reduce it again later.

If you follow the oil market you know that the only thing that saved the world from permanent triple digit oil prices was the American horizontal revolution.

American shale has been the only source of global oil production growth for the past decade.

I don’t know about that, but what evidence like Core Labs is making clear is that–horizontal driller activity is slamming to a halt, which should greatly help 2020 oil prices.

What makes this investment opportunity EPIC is the fact that there are great (non-shale) oil businesses that are trading at historically (and absurdly) low valuations.

The best stocks will have high oil weightings; almost no natural gas.  They will have great balance sheets–little or even no debt (yes there are a couple!).  And they will be growing inside cash flow.

These companies aren’t priced for anything close to $60 oil — many of them would need to double or triple just for that.  So if oil keeps going up from here and money starts finding the valuations here……..

These are the kinds of wealth creating buying opportunities that you HAVE to exploit.

The sector has a huge tailwind coming from the price of oil as shale production slows and the valuations in the sector are at historic lows.

Now is not the time for sitting on your hands and watching this play out.

Now is the time to pounce on this opportunity before the really big mainstream institutional dollars start flooding into the sector.  The entire market is expensive, this is the one sector that is dirt cheap.

The stock that I am telling subscribers to own has it all–including a double digit yield.  How many distress-free stocks have that?  Grab that yield NOW–click HERE. 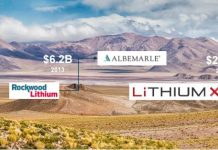 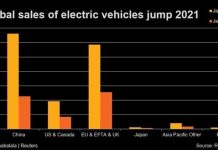