The Next Big Gold Discovery Is Right Here

The best place to find these Huge Wins is in junior mining stocks.  And I expect to see A LOT more now that the gold price has broken out to 5 year highs.  There’s going to be a lot of new millionaires in the coming year! 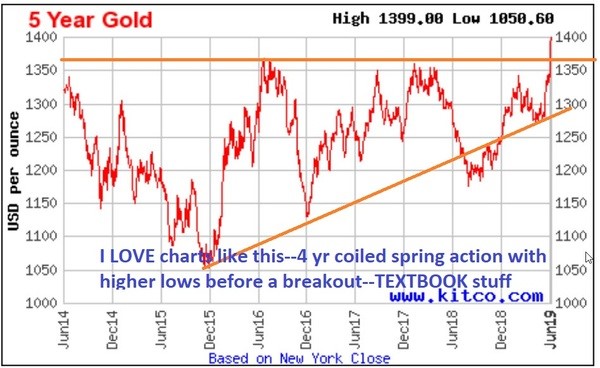 As expected, only the senior gold stocks are moving so far–the intermediates and the juniors will follow.

Look at Great Bear Resources–GBR-TSXv from this time last year: 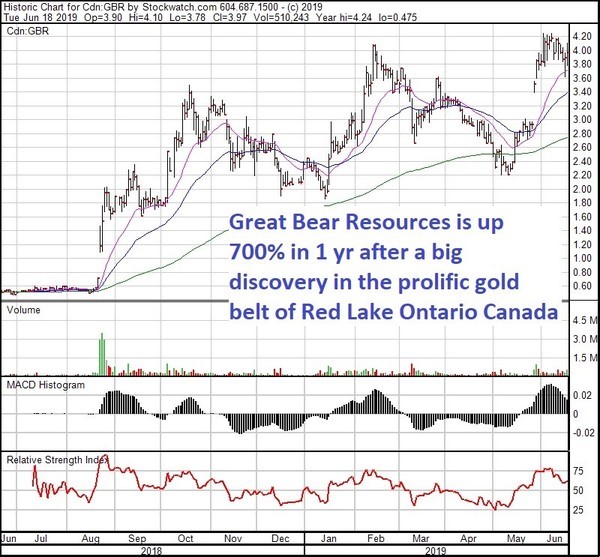 The stock soared from 60 cents to $3.40 in just two months–more than 500%!! once it made a discovery in one of the premier gold belts of the world–Red Lake in Ontario.  They followed all the rules–they had key shareholders who had built and sold juniors before and the company was cashed up with management’s money in a play with a great address.

Below, I’ll break-out these steps to successful to Discovery Investing–AND–show you where it’s pointing me in an email tomorrow. DON’T MISS TOMORROW’S EMAIL!!!!!!!!

I have every confidence that tomorrow’s email will make many of my readers A LOT of money.  I’m going to show you EXACTLY where I see The Next Big Discovery happening–likely within weeks.  And now that gold has broken out, expect the Market reaction to be immediate.

Discovery Investing Rule #1–You invest in a team that has built and sold a deposit before–making themselves and their shareholders rich. The team I’m introducing you to tomorrow has discovered and sold over 10 million ounces of gold!

Rule #2–You want to see that management has put A LOT of their own money into their current company.

Tomorrow’s team owns over 25 million shares, and they paid for ALL of them. In fact, the CEO bought the
company’s property with his own money–this team is ALL-IN like few I’ve ever seen.

“The best place to find gold is next to an existing mine”.

The Next Big Discovery–which I’m giving you on a gold platter tomorrow–is in a gold belt with over 35 million ounces discovered, where some of the most profitable mines in the world are operating right now.

Rule #4–treasury is cashed up and drilling.  Tomorrow’s company has the drills about to turn and is fully funded for this year.

The best part?  Well, exploration takes years–but investors have already seen some proof with the first set of drill results.  The stock ran up 400% in days! But in a tough junior mining market, it has come back to earth.

Management has continued to buy stock now that results are out, and the drills are about to turn again.

This stock has the PERFECT set-up.  It ticks all the boxes; it has followed this tried-and-true formula to a “T”.

I think it’s going to make a lot of people rich, in a very short period of time (including me!).

Management Has Already Done All the Hard Work

For more than a decade operating in this region this CEO has been stalking this specific property that is surrounded by major gold mines.

He watched with growing frustration as his most coveted opportunity sat in the hands of a party that couldn’t raise the money to develop it.

For ten long years he was unable to get his hands on the asset.  But he’s patient, and he was just able to buy this asset last year.

Raising money for grassroots exploration projects was almost impossible–so he used $750,000 of his own money as the lead order to buy it!

This man knows this region better than anyone! And for a decade this is the one property that he wanted. Now he has it.

This man has been exploring, developing and cashing out in this prolific gold trend area for 15 years with major success.  With his team he has been involved in discovering–and monetizing–almost 10 million ounces of gold.

At US$1,400 per ounce, that’s $14 billion in gold.  At an average valuation worldwide of $100 per ounce in the ground in a take-out, that’s $1 billion in shareholder value he and his team have created–all in this area.

But this is the Really Big Opportunity that he has always coveted.  And that’s why I want to put my money with this guy!

That is why he was the largest and lead order to get this asset initially and took on all of the risk.

You do that for one reason–because you know exactly what you are sitting on…a life-changing payoff.

It isn’t just the CEO who has loaded up with stock. The management and Board of Directors combined own more than 25 million shares and continue to add to that position. They have placed massive bets and are now on the cusp of being rewarded–the drills are turning NOW.

This company isn’t sitting beside an existing mine – it is surrounded by multiple mines which are SEVERAL multi-million ounce gold discoveries.

These are LOW COST producers–because they are high grade and near-surface. This is a mining investor’s dream!

As the only analyst who follows this company says…

“In our opinion, this company is in the early stages of making a major gold discovery…..”

“We believe these initial targets are only the tip of the iceberg…..”

There is no leap of faith required here. Everything around this property is laden with high-grade gold.

There were some GREAT results last year–and the stock jumped 400% IN ONE DAY.  Since then, the stock has returned to earth, and drilling in this prolific gold belt has just restarted.

The company has cash in the bank and yes, is now drilling.

How well situated is this property in this prolific gold belt?

Plus other recently announced discoveries that have yet to be quantified.

The most high-profile producer in the region has AISC–All-In Sustaining Costs–of $600 per ounce of gold.
With gold selling at $1,400 per ounce you can make a lot of money by pulling it out of the ground for $600 per ounce.

To be clear I am Big Game Hunting with this stock – I’ve bought it because I expect a major positive announcement this summer.

I’m hoping for a repeat of the many 5 million ounce plus discoveries in the immediate area.  That has the potential (remember folks this is still all potential!) to make this stock a 20-bagger from here–and tomorrow I’ll show you my math on that.

My profits from this one stock will make my year.

WHAT IF I’M WRONG–and they only find a small gold deposit? Well, because it is completely surrounded by operating mines, even a minor gold discovery will result in a huge win for shareholders.

If this company finds only 10 percent of the gold that I’m expecting it will immediately make for an obvious takeover target for a nearby operator.

This management team is one of the top exploration groups in the business–who have already built and sold two other juniors.  They want to sell.  They own a BIG chunk of stock and want to recognized the value they’re creating.

And this puppy is so cheap–you’ll gasp tomorrow when I name this company and you see its share price. I expect any takeover to occur at a nice premium to the current share price.  And with gold starting to run, you can bet the producers will want to buy these high grade gold ounces as quick as they can.

For the next six months this company is going to be constantly drilling holes into this extraordinarily prolific property.

And that discovery–which could be worth hundreds of millions of dollars–will be 100% controlled by a company with a current market cap under $25 million.

Do Not Miss Tomorrow’s E-Mail!

That e-mail will tell you where I expect The Next Big Discovery–possibly within weeks.  It has every ingredient I look for:

Tomorrow you’ll get the specifics of the team, the gold belt, their property–and of course the name and ticker of The Next Big Discovery.

Next post: THE NEXT BIG DISCOVERY ROSCAN GOLD ROS-TSXV; RCGCF-PINK

Previous post: Green Plains Inc Sinks Into the Red.. and Maybe The Black