Ethanol is gasoline made from corn, and it gets very profitable when corn prices (input costs) go down and oil prices (output prices) go up–which is exactly what happened in 2013-2014.

But I stopped following it a couple years ago, as its ethanol margins were always the worst of the major ethanol producers–Valero, Archer Daniels, Pacific Ethanol.  And its accounting made it too opaque to model.

Back in the good ole’ days ethanol margins hit $2 per gallon (February 2014)!  But now ethanol margins are horrible.  Inventories high.  Regulations have been a headwind.

On January 28th margins hit their lowest point in history.

They’ve recovered some since then but are still negative. 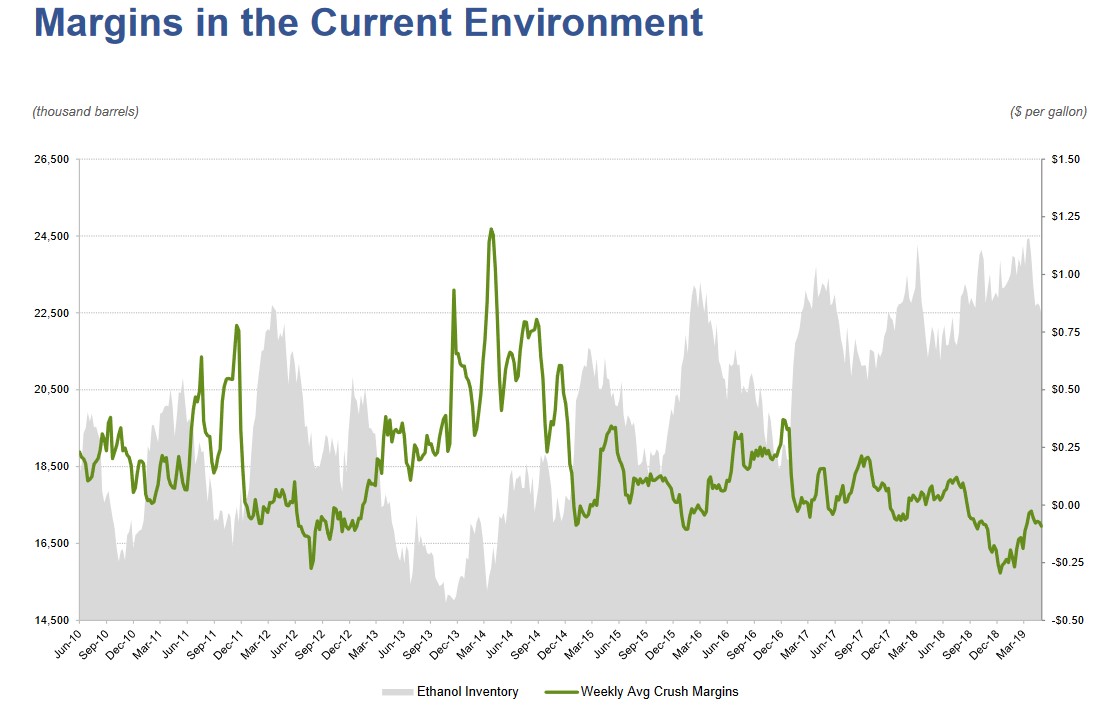 Yet negative margins don’t seem to be resolving the glut.  Inventories remain near all-time highs.

This environment has Green Plains, the fourth largest ethanol producer in the United States, launching a fire sale.

Green Plains sold 3 ethanol plants in November last year for $319 million.  These plants (Lakota, IA, Bluffton, IN and Riga, MI) were three of their most efficient assets.

That’s been the theme – sell what you can.  Not a surprise for a company under distress.  Analysts at Craig Hallum estimated the three ethanol plants would have generated $15-$20m million of EBITDA in 2019.

The asset sales are raising much needed cash, but they aren’t doing much for the income statement.

Consider the dispositions in this context: Green Plains had only $80 million of EBITDA in all of 2018!

The first quarter continued the trend – weakness.  A net loss of $1.09 per share on negative EBITDA.

More troubling was that the cash outflow from operations was $25 million.

It has worked in the past.  But not this time.  As the company said:

“while it may have helped a little bit, it wasn’t like the first couple times that we’ve done that… this time we actually saw that we didn’t have an impact on the overall margin structure because of the oversupply situation.”

If the cash flow statement wasn’t bad enough, Green Plains has cash going out the door by way of volume commitments with their 50% MLP Green Plains Partners.

Finally, things could get worse.

How is that possible?  Green Plains is buying last years corn for its feedstock right now.  But a slow spring with floods in the Midwest are pushing up futures of fall corn.

Corn is trading at $4 in Iowa right now.  September corn is at $4.45.  Another 10% hit to margins in the cards unless something changes.

Add it all together and this has all the makings of a perfect short.

Probably, but lets take a look at the risks.

The main fly in the ointment is the Trump administration.

In the past the Trump team has made some moves that have hurt ethanol and hurt Green Plains.

Pruitt signed a surge of small-refinery exemption waivers.  The waivers are essentially an exemption on blend requirements – with the waiver the refiner doesn’t have to blend ethanol.  These waivers were issued to both small and large producers, including to some large and profitable oil companies.

That hurt companies like Green Plains, as it effectively reduced ethanol demand.

A second punch came from the trade wars.  Green Plains has estimated that the impact on the trade wars has been a 20-30c a gallon decline in margins.

I don’t know if I buy what they are saying at face value.  Margins were slim in the fall of 2018 (before the trade war really erupted).  Today, oil is lower and corn is higher.  Changes in margins have been more complicated than that.

But no question that the regulatory environment hasn’t been favorable.  However, with the election approaching that’s changing.

Big picture is Trump wants to help farmers.  He’s hurt them with the trade war.  He knows it.  They know it.

An easy bone to throw is to mandate increased ethanol demand.

There are two ways Trump is doing that.

At the end of May the EPA announced changes that would roll back the summertime ban on E15 fuel.  This is a blend of 15 percent ethanol and 85 percent gasoline.  The restriction had previously limited ethanol blending to 8 months of the year.

Ethanol is cheaper than gasoline (although it has less energy content).  Blenders capture more margin when they blend more ethanol.  Those with access to ethanol will blend as much as they can.

This one is a done deal.  It likely isn’t going to have an immediate impact.  But come next summer we should start to see more ethanol blending.

The second and potentially bigger impact could come from a deal with China.
Tariffs on ethanol to China are 70% right now.  Ethanol exports to China have been part of the trade negotiations.  The numbers being bandied about have China buying between 400 million gallons to 800 million gallons a year.

If those numbers happen, it will mean a boost for ethanol margins.

More important for a prospective short-seller, it likely means a pop in the share price of Green Plains.
So that is the risk.

Apart from a positive trade war resolution though, there is not much to like about Green Plains right now.

IMHO, its very solvency is in question.  It could go to zero.

But even with that risk on the table I’ll be watching the slow train wreck that is Green Plains from the sidelines.  I think I know where its headed but curious if they get saved by the bell.