WHAT ARE THE EIA OIL PRODUCTION NUMBERS TELLING US?

How fast is US oil production slowing?  That is The Big Question that oil bulls are asking right now.

For the monthlies, an investor could reasonably argue the rollover in US shale production is already happening.

The EIA is the Energy Information Administration based out of Washington DC.  You can learn all about them here – https://www.eia.gov/about/

Every week the EIA estimates oil inventory, imports, exports and production to give the public a full picture of what happened over the previous week.

If you talk with the EIA or dig into their methodology, one thing becomes clear: they have a much firmer grasp on inventories than any of the other numbers they provide.

Every week the EIA surveys for inventory.  In addition, there are third party data providers like Genscape that make inventory estimates from thermal cameras, satellite images and other innovative techniques.

What it means is that EIA has a lot of confidence in their inventory number.  They know it’s in the ballpark and are confident which base it’s on.

The production numbers on the other hand….

Weekly production is estimated from the latest available production data from Alaska and a whole bunch of short-term forecasts for the rest of the country.

Those short-term forecasts come from the STEO, or Short-Term Energy Outlook, an EIA modeling exercise which is notoriously inaccurate.

Bottom line – the weekly data we get is marked-to-model and has a history of being wrong.

The monthly numbers are far better quality than the weeklies.

In 2015, the EIA began to issue a comprehensive, survey based monthly production report (the EIA-914).

The survey used in the report included all major production areas.  According to the EIA at least 85% of production within a state is surveyed. Overall, they assert that 94% of production in the country is accounted for.

Even though the methodologies differ, over time the weeklies and the monthly data have tracked each other fairly well.

There are some that say this is because the EIA plays with the weekly data if they need to get it back inline with the monthly numbers.

Whatever the backroom mechanics, the data is usually fairly close over time and if anything, the monthly data has a history of showing higher production than the weeklies. 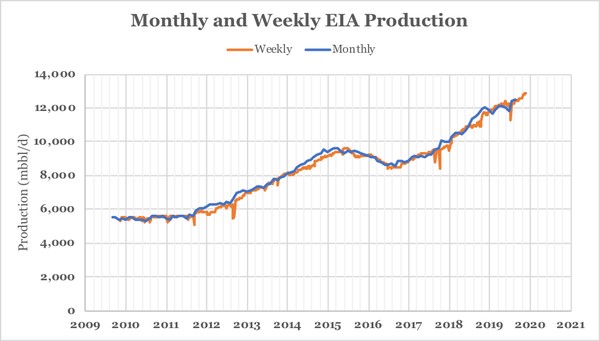 That is, until recently.

First, let me be clear – there is very little discrepancy between the two datasets for the last few comparable periods.

In fact, if you looked at the September data alone, you would conclude that the weekly and monthly numbers agree extremely well.

The monthly data for September, which is the last reported period, is showing about 12.46 million barrels per day of production.

The weekly data agrees with that – the September weeklies bounced between 12.4 and 12.5 million barrels per day.

Well, maybe.  The problem is in the trend.

Taking a step back to look at a longer time horizon, the two datasets are telling different stories about the trend in production since around the fourth quarter of 2018. 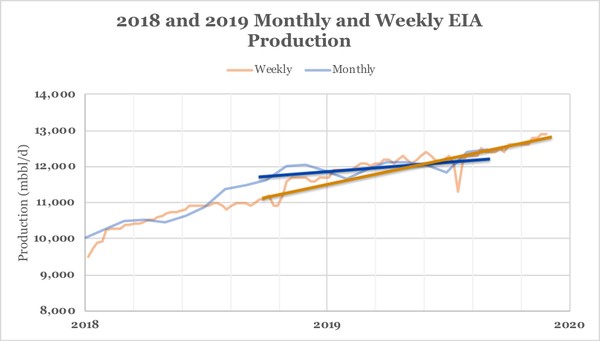 Weekly data started the year at 11.7 million barrels per day – which means up to the September numbers, there was 700,000-800,000 barrels per day of growth in production.

The monthly data is showing much more modest growth.  Only a little over 400,000 barrels per day for the first 9 months.

Looking through to December, the weekly data continues to show production climbing.  The most recent numbers have production at 12.9 million barrels per day.

Clearly if the weekly data is correct then US growth has not slowed that much this year – 1.2 million barrels per day of growth is huge!

But if the monthly trend is correct then maybe this is a different story all together.  It is telling us the U.S will add maybe half a million barrels per day by year-end.

That would be very bullish for crude prices.

The Next Few Months with be Telling

There are two noticeably different trends here and it is too early to say which is right.

The simplest way that I can see this resolve is if the monthlies “catch up” to the weeklies.

In other words, we see large production increases in October and November, it confirms that crude production has grown as expected and the crude oil market continues to muddle along.

If that happens, then this is all much ado about nothing.  What we are seeing here is not a trend, its noise.

But what if the monthlies don’t confirm the production increase at year end?  What if the trend continues along the same line it has followed since late-2018?

In other words: what if the monthly data is telling us that the supply-demand balance is quite a bit tighter and the Permian rollover is already happening?

Anecdotally, what we hear from producers and servicing companies line up much better with a trend of flatter numbers.

The rig count has trended down all year.  In fact, there was a slowdown that began in the fourth quarter of 2018 (is it coincidence that this is the same time the monthly data began to flatten out?).

Commentary coming out about the fourth quarter of this year point to this slowdown continuing.

That means that 1.5 million barrels per day of production need to be replaced next year just to keep production flat.

Shale production is on a treadmill that needs to run very fast.

I’m still taking a wait and see approach, but my interest here is piqued.

The next couple of monthly numbers will be key.  If the monthly numbers don’t show a pop up to 12.8 or 12.9 million barrels per day it will be a huge red light for production growth.

And a green light to buy well positioned oil stocks.

Become a Paid Subscriber to get access to my top energy picks, and more, by clicking HERE

Next post: GET READY FOR DOUBLES AND TRIPLES IN THE OIL SECTOR IN 2020: PETER LYNCH