This Entire Industry is Running Off a Cliff–Why?

Running Off a Cliff at Full Speed?

Western Canadian natgas prices are lower than a snake’s belly in a wagon rut.

And while most stocks are pricing that in, there could be another big leg down this spring.

The main natgas pricing hub in Canada is called “AECO” which is an old acronym for Alberta Energy Company. Consider it another “hub” like Henry Hub in the USA.

And despite the Polar Vortex across North America recently, AECO prices have actually being going down with Feb – Dec ’18 now sitting around $1.20/GJ. In US dollar terms, under a buck.  It’s a huge difference from US prices; and the discount of Canadian gas prices vs US is only getting bigger–see this chart: 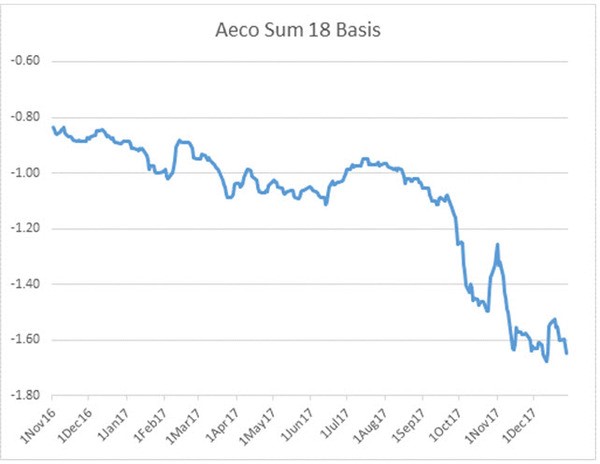 Folks, there is NO positive cash flow for management or investors at these forward strip prices.  Most analysts put the supply cost for western Canadian natural gas north of ~$2.00/GJ and in many cases well above this mark.  Once again, in 2018, I expect Cdn natgas pricing to go negative on several days this summer.

(Last year there were days when natgas was as low as NEGATIVE $7/mcf!)

It means that Canadian natgas producers will lose HUGE money again this year with every molecule they produce.

So why is Canada producing natgas at a record pace? Western Canada produced a decade-high 17.14 bcf/d on December 23, and after a brief time when some production froze off, it is now back over 17 bcf/d.

Storage levels remain high in Alberta, and with weather forecasts now warming, consensus is for an average storage level come spring…which sets the stage for weak pricing through the rest of the year.

Of course, part of the problem is that the Canadian industry ramped up to get ready for LNG–and so far nobody has committed to a $10-$20 billion project on Canada’s west coast.

The US has the Gulf Coast LNG as a relief valve for their natgas production…and US natgas production is up 4 bcf/d over last year already to a record 77.5 bcf/d, and is expected to grow 5 bcf/d in 2018 and again in 2019. (LNG exports are only increasing at 1-2 bcf/d per year).

This is obviously not good for producers or their investors. Really high production, really low prices…anybody see a problem here? And nobody is cutting back that I can see…I cannot find ONE formal announcement of a production decline…several have said they won’t grow as much as they originally said they would.

Producers like Painted Pony (PONY-TSX)have said they will match spending with cash flow…but they have hedged a lot of their production.

Canadian natgas stocks have predictably been taken out to the woodshed. Low cost senior producer Peyto (PEY-TSX) is trading at $14, a level not seen since the financial crash of 2008. Mike Rose’s Tourmaline (TOU-TSX) is back near its $20/share initial trading range from seven years ago.

Almost all the intermediate natgas producers—Birchcliff, Painted Pony, Crew Energy among others—are all at or barely above 10 year lows (Jim Riddell’s Paramount (POU-TSX)being the notable exception).

But it could get worse for investors this spring—when reserve reports come out.

Reserve reports are done by independent reservoir engineering companies—they are the accountants—or more like the auditors—who determine what amount of economic hydrocarbons are actually in the ground.

Spot pricing in Canada now–in the coldest weather since the Polar Vortex of 2014—is $1.60ish.  The strongest pricing of the year is generally right now.

To me, that’s a pretty bloated price estimate.  Do reserve reports have any use with pricing that out of whack? (On the same note, if you are silly enough to go bottom fishing in this sector and you start reading a company’s powerpoint–check to see what kind of outlandish gas prices on which they base their projections).

Maybe reserve engineers do use that inflated deck – because things will look awful for producers if they don’t.  Investors could see some HUGE asset writedowns, which then impacts their borrowing base/credit lines (though banks do use their own price decks).  It can be a vicious downward spiral.

The other thing that may happen with reserve reports this year?  Costs go up; specifically what’s known as FDC—Future Development Capital.  Experienced frac crews in particular have been tight this year and that has driven up costs more than the average.

In their year reserve report, producers get to report what is called 2P reserves–Proven and Probable.  Think of 1P–Producing–as the amount of oil or gas that they are producing now AND what is about a stone’s throw away from producing wells.

There’s a 90% chance of the oil and gas in that area actually being there (I mean, we are guessing about stuff that’s a mile underground).  This means the reservoir engineer is really confident there’s no geologic fault that stops the reservoir or the geology doesn’t change or the productive formation doesn’t thin out etc.

2P resources are for an area a lot farther afield (and that distance varies company to company) from where the wells are producing.  The reservoir engineer only gives a 50% probability to the oil and gas actually being there, that far away.

2P resources can be a wonderfully BIG number, very good for promotional powerpoints and luring investors in.

But management teams also have to say how much it would cost to develop those 2P resources—that’s the FDC.  (Funny how this # often doesn’t make it into those powerpoints.)

Management teams divide that BIG 2P resource # by the FDC to tell the Market how much in it will cost per barrel in the future to get the undeveloped oil and gas out.

Let’s say that big number is 20 million barrels, and the cost to get it out is $100 million; that equals $5/barrel costs.  That’s really good!  If natgas is trading at $20/boe, analysts can model future cash flow of $15/barrel.
But well costs have gone up in 2017, and natgas prices have gone lower.

I’m going to use Birchcliff as an example here, not to pick on anybody but as a general example of what may happen to many natgas producer stocks this spring.

In their 2016 reserve report they booked 511 (502 net) potential drilling locations in their reserve report.
On an undiscounted basis those future locations had capital requirements (FDC—Future Development Capital) of $2.5 billion on a 1P basis and $4.2 billion on a 2P basis.

Boutique energy brokerage Peters and Co recently estimated that BIR would have about $250 million of funds flow on strip (before funding dividends) in 2018.  This time last year, Peters had them at $360 million in cash flow for 2018—a 44% difference. (Birchcliff gets roughly 50% of revenue from liquids, despite it only being 20% of production)

Due to low prices, producers like Birchcliff will likely have to reduce the number of locations they have booked, at the same time well costs went up…you can see the potential for a HUGE drop in indicated future cash flows.

If management and the reservoir engineers think that technology has increased the amount of oil and gas per well (the EUR, or Estimated Ultimate Recovery increases from a well)—that would slow the drop in future cash flows.

For management teams who have aggressively booked future locations, this increase in FDC with higher well costs could be a big hit–on paper.

It looks like that wagon rut is about to get deeper.  Investors beware.

EDITORS NOTE: This story is why I have been telling my subscribers to stay with the OILIEST producers for the last year.  I want to invest in producers with rising EBITDA, rising Free Cash Flow and Rising Stock Prices…click HERE to get the OILIEST profits!

Next post: Do You Really Understand What’s Happening in Oil Right Now?