In 2017 the global oil industry recorded a dreadful level of new discoveries.

You read that correctly.  I said dreadful.

Global energy consultant Rystad Energy of Norway just reported that in 2017, producers made enough discoveries to replace just 11% of what was produced during the year.

That means that for every 100 barrels consumed, only 11 were discovered.  That kind of math isn’t sustainable for very long.

Total discoveries in 2017 amounted to 6.7 billion boe.  On the surface that sounds like a big number but—next to what the world consumes every day—it isn’t.   At 95 million bopd of global demand, we use 1 billion barrels of oil every 11 days.  6.7 billion boe is just 70 days worth of demand.

To replace what was consumed, discoveries needed to be 5-9 times higher. 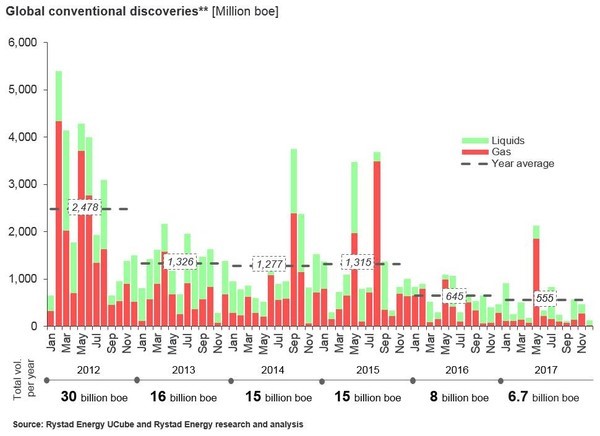 This problem—replenishing reserves—will only get worse.  You see, with lower oil prices the industry is now spending even less looking for new reserves.

Now I bet you are thinking that there is no reason to worry about these abysmal levels of reserve replacement because we can now count on shale oil.

That just won’t cut it.

While it has been a massive success (and will continue to be), today shale oil represents only five percent of total global oil production.  Growing that five percent won’t compensate for finding just one barrel out of every ten that are consumed—at least, for very long.

Clearly, the price of oil is already indicating that something is going on.  I believe that oil market players are now remembering something foggy in the back of their minds…this industry is very cyclical!

What happens in a cyclical commodity industry like this is: after several years of massive underinvestment, it sets the stage for a powerful, extended bull market.

My subscribers and I are ready to profit from this up-cycle.  We aren’t going guns a blazing chasing every oil producer under the sun however.  We are positioned for this by being very selective.

The reason that I’ve pounded the table on this particular company to my subscribers is that it is different.

When oil was under $50 per barrel this company’s core oil play was generating IRRs of over 100%.  That isn’t just good, it is off the charts good.  Most companies don’t have assets that can do that at $70 oil.

That high rate of return play is how this business was growing production by over 15 percent per year with oil at or below $50 per barrel.

With a pristine balance sheet, huge core land position and oil prices that are now surging above $60 I can’t wait to see what kind of growth this business will generate in 2018 and beyond.

The kicker is that the market still has this stock at a valuation level that lumps it in with mediocre producers that are priced for what they are……mediocre.

I can assure you that this company is not that.

Small valuation, big growth, and a surging oil price that makes the stock worth more every day.  This one has all the makings of a 2018 (and beyond) success story.  Get the name and trading symbol by Clicking HERE.

Next post: This Entire Industry is Running Off a Cliff–Why?

BOE
Barrels of oil equivalent.Takes roughly 6 mcf of gas to equal the amount of energy in one barrel of oil.