Shipping’s Dirty Secret–and How I’m Profiting From It

Here’s some trivia: What segment of the transportation sector represents 7% of fuel demand but accounts for 90% of SO2 (sulphur dioxide) and NOx (nitrogen oxides) emissions?

Lately there have been several reports out about upcoming changes to sulphur regulations being passed by the International Marine Organization (IMO).

There could be billions of dollars on the line for energy investors as the Market is unsure if this will mean a large surplus of heavy crude for a few years.

These reports detail some big changes to the shipping and refining industry when IMO 2020 comes into effect.

It’s a little-known fact that the shipping industry is one of the worst polluting industries in the world. A single container ship can produce as much pollution as 50 million cars.

HSFO hits over its weight to global emissions.

Burning HSFO produces more carbon dioxide than gasoline, diesel or other lighter fuels. But worse, HSFO has high concentrations of SO2 and NOx. These are primary contributors to smog, soot and acid rain. 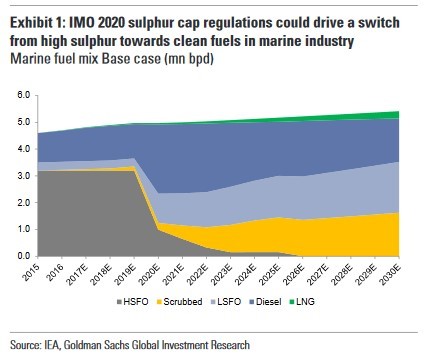 But that’s about to change.

The IMO is cleaning up the industry. They have a goal to reduce greenhouse gas (GHG) emissions 50% by 2050, and are pursuing a member agreement to eliminate CO2 emissions entirely.

Those are the long-term goals. In the short run the target is sulphur.

The consequence will be a big reduction in HSFO demand. HSFO will only be used on ships having scrubbers that can remove the worst of the pollutants.

It’s a big change, a sudden change. It’s going to have repercussions in three key areas:

Cruise ships have long been a favored destination of gamblers. The reason? Once you are out on international waters, national gambling laws no longer apply.

The high seas are open season for lawlessness. The analogy works for the shipping business. While individual countries can create rules, they can only enforce them within the narrow borders of their own harbors.

Trying to get the shipping industry to stick to rules has always been a challenge.

That’s why when the IMO first floated new limits on SO2 emissions (back in 2016) no one paid it much attention.

IMO is a UN body. Their responsibility is to ensure shipping is safe, efficient and that pollution is controlled.

But like a lot of UN bodies, the IMO is only as strong as its members. They can proclaim whatever they want, but if the members don’t back it up with action it’s a whole lot of words.

It wasn’t until they put teeth into IMO 2020 this February that the markets took notice. They proposed an all-out ban on non-compliant fuels in the tanks of ships. The only exception to the ban would be if there was exhaust cleaning technology (ie. scrubbers) installed on the ship.

Each member country would inspection ships upon entering their ports and/or at refueling bunkers. Most of the large shipping regions are onboard with the rule. But compliance won’t be perfect. Emerging market regions outside of China are expected to see 50% compliance at best.

Nevertheless with North America, Europe and China onboard its become clear to the industry that the rule is going to stick.

Shipowners are looking at their alternatives.

What’s a Shipowner to do?

Shipowners that use HSFO have 2 choices:

2. Install scrubbers to clean the fuel before using

A third choice is switching to LNG. But LNG is a long-term solution. The rule change will lead to more LNG fueled ships. But in the short run, converting a ship to LNG is not a realistic option.

Switching fuels is the easiest choice. Shipowners basically do nothing: wait for 2020 and fill the ships with a low sulphur fuel like marine gasoil (MGO).

The problem with fuel switching is that the fuel options are going to be expensive.

The forward curve is projecting HSFO prices at around $325/mt in 2020. MGO (or an equivalent low sulphur fuel) looks to be much higher, around $650/mt.

That’s a doubling of fuel costs.

The cost is highest for the biggest ships (the one’s that consume the most fuel). Take for example a VLCC (very large crude carrier). Tanker broker Poten and Partners estimates the following:

Assuming a time charter rate of $38,250 per day, a VLCC owner using MGO fuel would need to charge its charterer $14.87/ton to move its cargo from the Middle Easy to the Far East. The same ship using HSFO (ie. equipped with scrubbers) could charge $11.14/ton.

That’s a significant difference. More than 30%. To put it another way the ship using HSFO can generate a $12,500/day premium on its charter price compared to the one using MGO.

The shipping business always operates on thin margins.  Having a 30% advantage over the competition is a big deal.

With shipowners crunching these numbers it’s no wonder they are looking closely at scrubbers.

A scrubber is essentially a filter system installed on the exhaust stack. Before the exhaust escapes into the atmosphere, a liquid mist in the scrubber adheres to SO2 molecules and “captures” it. The remaining exhaust goes out the stack while the SO2 sludge accumulates below.

Scrubbers aren’t very hard to make. They are really just a bunch of metal and piping. But the scrubber industry has traditionally been a small, niche one. It simply doesn’t have the capacity to retrofit a worldwide fleet of 70,000 ships.

Nor does it make sense to retrofit all the ships with scrubbers.

There is a bit of game theory here. The value of installing a scrubber comes from the expectation that not everyone else will. Less scrubbers, more to gain from the fuel spread.

Still, the list of ships lining up to install scrubbers is increasing every day.

In the last two weeks the Market saw announcements from Eagle Bulk Shipping, Star Bulk Carriers and Sembcorp Marine. Last month Frontline announced they were even taking a 20% stake in a scrubber manufacturer.

On the new-build front, the #1 trade magzine for shipping, Tradewinds, quoted one shipbroker as saying, “There is no charterer willing to take a newbuilding without a scrubber”.

Scrubbers aren’t cheap (they can cost between $2-$5 million depending on the ship). But Goldman estimates a payback of under 2 years on current spreads.

This is a HUGE opportunity… and OGIB subscribers are profiting from it. The one ‘scrubber stock’ I bought last week is already up 40%–in under two weeks!

In Part II of this series on IMO 2020, I’ll explain the oil and fuel implications of this initiative. This is where the numbers can get Really Big. What will this mean to heavy oil spreads–will they be larger for longer? What about US shale oil, that produces almost no middle distillates that’s needed as the new fuel for shipping… for investors, each answer is worth billions of dollars.

Editors Note: Finding oddball energy stocks like this ‘scrubber stock’ is what makes investing fun, and lucrative. These are stocks that go from obscurity to mainstream quickly, creating huge capital gains for shareholders. Be ready for The Next One–click HERE for your risk-free trial subscription to OGIB