Talk about a business failure!

Since 1888 the Texas Pacific Land Trust (TPL-NYSE) has been trying to wrap-up operations and go out of business.

That is 129 years of not accomplishing what seems like a simple goal.

If it is any consolation (and I’m sure it is), one thing Texas Pacific does do well is–making shareholders money; a lot of money.

This has been especially true over the last decade. Ten years ago Texas Pacific Land Trust–which is a regular corporation, not an MLP or royalty trust–was trading for $25 per share.  Today those same shares trade hands for more than $400.

That would be a one, two, three…….sixteen-bagger by my estimation. 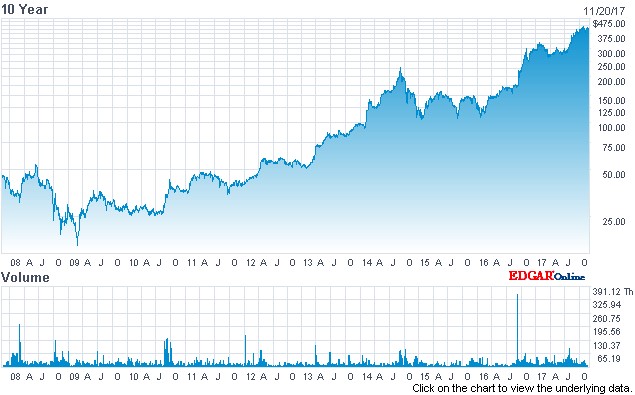 Even the 2014 oil crash could not stop this company.  Texas Pacific Oil Land Trust shares have doubled since 2014 despite the price of oil being cut in half.

This has to be the greatest story of the shale oil boom that nobody has heard of.

So how did Texas Pacific do it?

A Going Out Of Business Sale Since 1888!

That was the year that Thomas Edison filed a patent for the Optical Phonograph (the first movie).  The year when incumbent US President Grover Cleveland lost his re-election campaign.  The year when Jack the Ripper terrorized the city of London England. 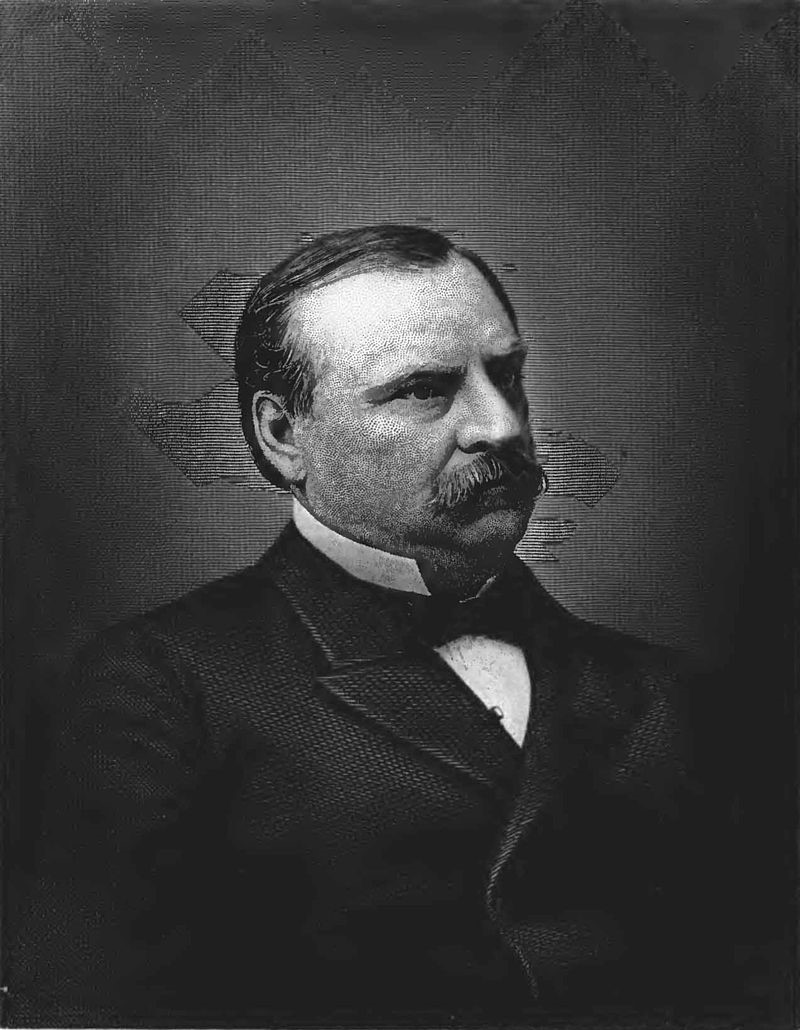 Texas Pacific came into being on the bankruptcy of the Texas Pacific Railway.  The railroad had previously issued bonds to pay for the construction of a rail line to west Texas to connect with Southern Pacific’s line.

The collateral (security) for those bonds were 3 million acres of west Texas land which the state of Texas had granted Texas Pacific to incentivize the building of that rail line.

The rail line to the west was completed but Texas Pacific ran into hard times.  Flooding in Louisiana and crop disasters in Texas hit cash flows and forced Texas Pacific into bankruptcy.

When that happened the bondholders received the collateral that they were owed in the form of shares of the Texas Pacific Land Trust.

Texas Pacific Land Trust was actually not meant to be a long-term going concern!  It was meant to be a temporary vehicle from which the bondholders (now shareholders) were repaid some of their principal.

The trustees appointed to manage the trust were given three simple instructions:

Step One – Sell the land

The one specific instruction the trustees were not given was–a timetable.  An omission for which I bet some great-great grandchildren of the original bondholders are now very thankful!

Fast forward 129 years later and these guys are still hard at it winding up the Trust. Don’t rush yourselves fellas!

Few Shareholders, No Analyst Coverage, But A Whole Lot Of Land

If you are looking to attend a Texas Pacific Land Trust session at an oil and gas conference you will be disappointed.

They won’t be there.

You aren’t going to be able to read an analyst report on this company either.  Nobody follows them since there are no investment banking fees to be earned here.

Even press releases from these guys are few and far between.  They announce quarterly earnings and that’s it.

There is an amazing lack of attention paid to a business that is one of the ten largest landowners in the United States.

Originally in 1888 Texas Pacific started off with 3 million acres and the objective of selling it.  At the end of December 2016 the trust still had 887,553 acres located in 18 counties in the western part of Texas.

Here is the map of exactly where that remaining land is from the trust’s 2016 annual report (focus on the dark blocks): 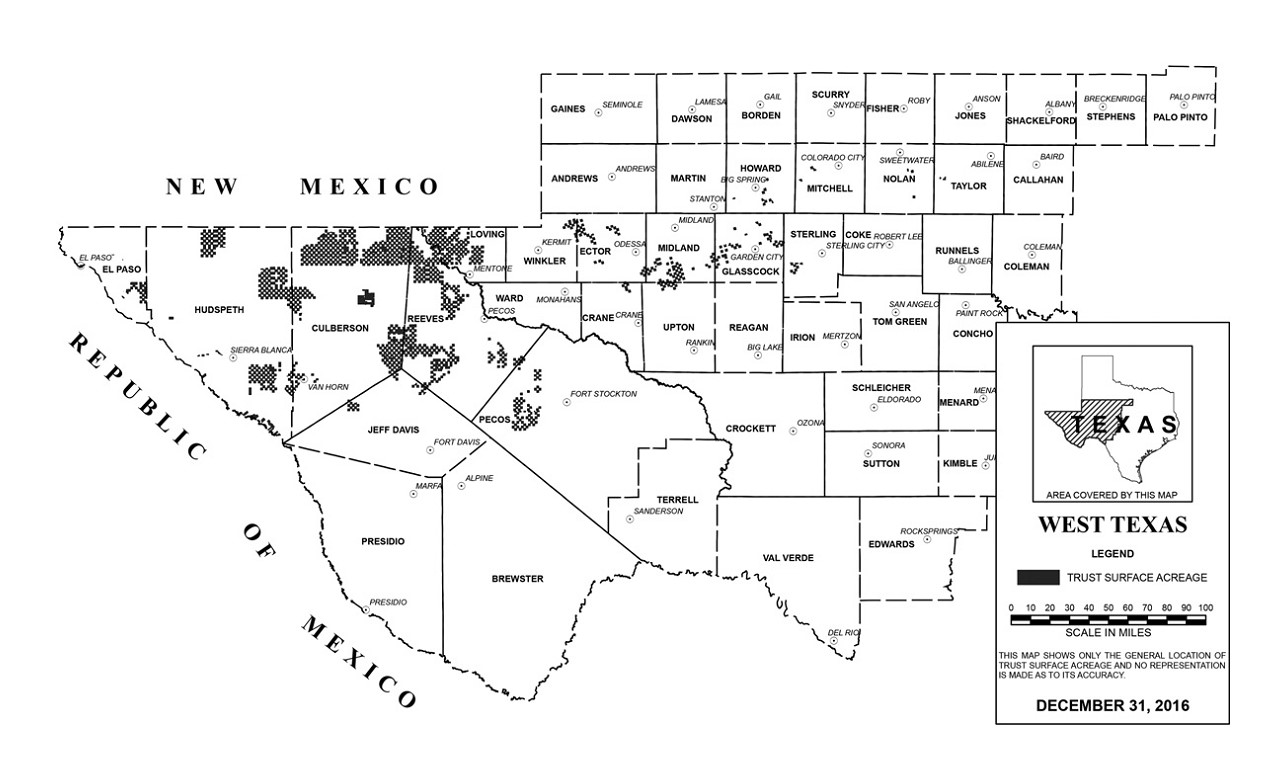 If you are an oil and gas investor those dark blocks that indicate the trust’s surface acreage likely made you sit forward for a closer look.

The majority of that land is located in Culberson County, Reeves County and Loving County.  That would be the very core of the Delaware Basin portion of the Permian and extremely coveted acreage.

The Trust does continue to sell land, but at a very slow pace.  In 2016 total land sales amounted to 774 acres.  It would be hard to argue at this point that the trust isn’t fulfilling its fiduciary duties by holding onto that land and reaping the rewards that come from it. 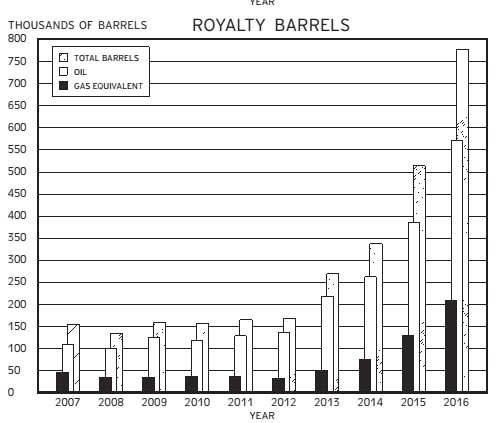 As a royalty owner the Trust–of course–has extremely wide profit margins.  Cash comes in and very little goes out to pay expenses since it only takes eight people to run this business.

Full year 2016 revenues were $59 million and net income before taxes was $54 million.  All but $5 million of the cash that came in the door turned into a profit for shareholders.  Really, the only significant expense was $17.8 million in income tax.

Net income before taxes for the first nine months of 2017 was $85 million more than double where it was in 2016 on higher oil prices and higher production.

Most of the free cash that this high margin business generates goes back to shareholders–but in the form of share buybacks.  More than 17% of the Trust’s outstanding shares have been retired since 2010.

The company has no debt and roughly $70 million of cash on the balance sheet.  There is also a small dividend.

A New Trick For This Old Dog?

Texas Pacific Land Trust has been a great story and will continue to be as the interest in the Delaware is only increasing.

There is potential for another twist to the plot.

Last June in a very subdued two paragraph SEC filing, Texas Pacific said they were starting a new subsidiary called Texas Pacific Water Resources, LLC.  The plan for this company is to provide full-service water offerings to operators in the Permian Basin.

Services provided by this new company would include water sourcing, treatment and recycling, as well as associated infrastructure construction, disposal and even well testing services.  Leading the business will be Robert Crain who led the development of EOG’s water resource programs across the Eagle Ford and Permian basins.  That’s a pretty good resume!

As you may be aware, water is a big part of horizontal drilling and multi-stage fracturing.

With 887,000 acres of land Texas Pacific owns the water rights for a massive portion of the Permian.

Could this be a huge new revenue source for TPL-NYSE?

The investment firm Horizon Kinetics was onto the Texas Pacific Land Trust story years before anyone else, having owned shares since 2011.  Horizon now owns more than 20 percent of the outstanding shares of the Trust.

In Horizon’s second quarter investor letter this year the firm made a few observations about the potential for the new Texas Pacific Water Resources business.

“The water actually used in drilling generally costs $0.50 to $1.00 per barrel or more, with trucking costs often multiples of that.

Texas Pacific Land Trust, via its surface acreage, owns the ground water and water rights associated with that land.
This is an additional revenue producing resource that has yet to manifest itself in the Trust’s financial statements.

Next, along with every barrel of oil that comes to the surface, comes about 4.5 barrels of “produced” water, which is non‐potable, often containing toxic elements.

Something must be done with it.

We believe Texas Pacific Land Trust will engage in water recycling, as well.”

Horizon’s conclusion is that the water business represents a free option embedded within the Texas Pacific Land Trust Business.  I would agree with that.

When thinking about Texas Pacific’s valuation investors need to be aware that this is not an MLP like Viper Energy where all profits are distributed to shareholders and tax isn’t paid at the corporate level.  Texas Pacific pays income tax, over $17 million in 2016 and will pay more than double that in 2017 on higher net income.

That seems steep, but you have to remember that the company is going to double earnings in 2017.  You would certainly be paying every bit of that 38 times earnings for a tech company that is growing earnings by 100 percent.

Whether or not this is a good price will also depend a lot on what happens to the price of oil in the coming years.  The other key variable the speed at which production rises in the Delaware Basin.

One thing that is certain is that it looks like these guys are going to continue failing at their objective of going out of business for a long time to come.

EDITORS NOTE: My #1 Oil Stock is not $400 like TPL. Nor will my #1 Oil Stock ever trade close to that…because it’s so profitable at $50 oil that I’m sure someone will buy them out first.  This stock is a Free-Cash-Flowing Machine, with some of the lowest cost production in North America, run by a team who has made shareholders HUGE money in their last two companies. Get the name and symbol on this rocket right HERE.