Half the oil price but 4x the free cash flow! Sounds like a pitch from Barnum & Bailey’s circus, doesn’t it–Step right up folks and see it with  your own eyes!

This is the best kind of magic……the profitable kind! 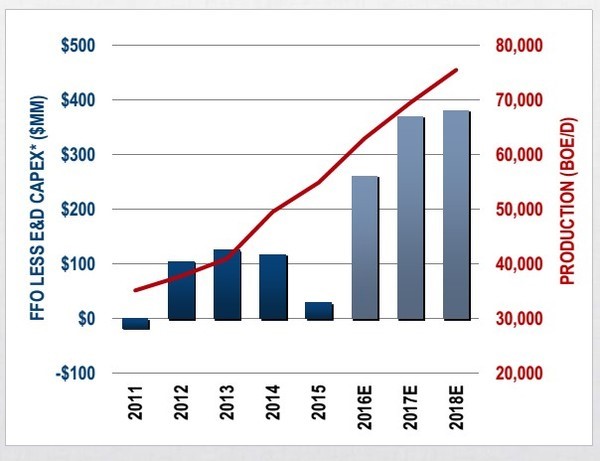 Ladies and gentlemen, allow me to walk you through it.

The rising red line depicts Vermilion’s total production by year.  Production starts 2011 at 35,000 boe/day and will be more than double that next year in 2018.

Not bad, but this trick gets a lot better.

I direct your attention now to the dark blue bars of the years 2011 through 2015.  These bars represent free cash flow, calculated as funds flow from operations less all capital expenditures.

When I say free cash flow I’m talking about cash that is available to pay dividends, pay down debt or repurchase shares.  Something that shareholders of a staggeringly large number of producers know nothing about.

From 2012 through 2014 with oil prices bouncing between $85 and $100 per barrel Vermilion still generated close to $100 million of free cash flow per year.

Honestly, in a world where shale oil and gas producers generate no free cash flow ever Vermilion’s $100 million per year even at high oil prices looks pretty good.

Now this is where you need to sit up and pay attention, here is where the magic begins.

There is no illusion or misdirection involved here.

These aren’t one-time blips in cash flow caused by asset sales or weird hedging gains.  This is cash flow that remains after capital spending that has been generated from production with 2016’s actual commodity prices and a recent strip pricing assumed for 2017/2018.

The capital spending that Vermilion is doing will keep production growing at a rate of 5-10% /year.

You have to admit, this is some beautiful magic.  With half the oil price of 2012-2014 Vermilion will be generating almost four times the free cash flow going forward.

A Look Behind The Curtain – How Vermilion Pulled Off This Trick

If you enjoy watching a magician the last thing you really want is to understand how he pulled off a great trick.

As investors we should have no interest in a company not being able to explain how it achieved something.  We shouldn’t ever own anything we don’t understand.

Vermilion’s trick is based on three components.  All of them important to achieving this magic.

Some companies have one or two of these components, few have all three.

This one is obvious.  To generate any cash flow, never mind free cash flow an oil and gas producer must make a decent margin from the barrels that it actually produces.

Vermilion generates terrific netbacks (revenue minus operating expenses) across all of its assets. 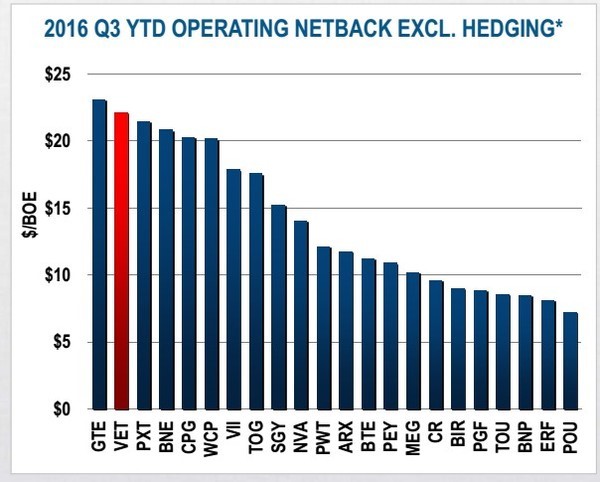 In 2016 Vermilion’s netbacks were among the best in the industry.  That by itself is good, when combined with the next two components it is even better.

High netbacks are obviously important, but it involves only how much money Vermilion makes after wells have been put on production.  Most of the spending in the oil and gas business takes place before production starts.

We need to also factor in how profitable Vermilion’s production actually is when consideration is given to the capital invested to bring those wells onto production in the first place.

The way that the industry measures this is referred to as “capital efficiency”.  How much it costs to bring on new production. 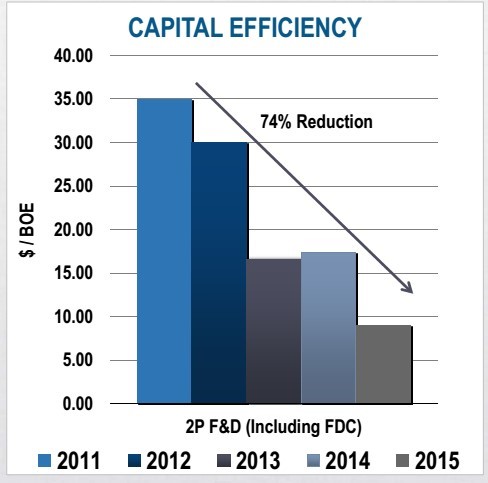 For Vermilion in 2015 that number was just $9 per barrel.  The company has made huge improvements over the past five years.  I expect when 2016’s reserve report is released we will a similarly low figure.

There aren’t any shale producers that I’m aware of that pay a significant and sustainable dividend.  Some of them have high netbacks and even strong capital efficiencies.  What they lack is the third key component that Vermilion has……a low production decline rate.

The chart below shows the difference between Vermilion and a pure-play shale producer like Raging River (RRX:TSX): 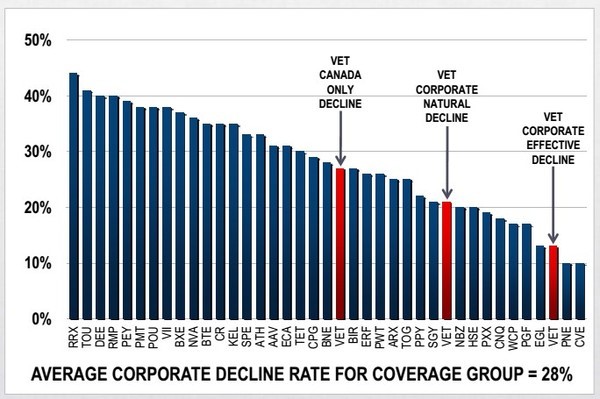 Raging River’s production is declining at a rate of 45 percent per year.  Vermilion meanwhile has a decline rate of only 13%.  Think of how much less money Vermillion has to spend in order to offset production declines.

There is that free cash flow again.

You will notice that Vermilion shows a “natural” and an “effective” decline rate in the chart.  The reason that the “effective” rate is lower is because Vermilion is restricting production at two of its assets in order to maximize long term recoveries.

With production restricted, these two assets (Netherlands and Australia) have will have no production declines year on year. 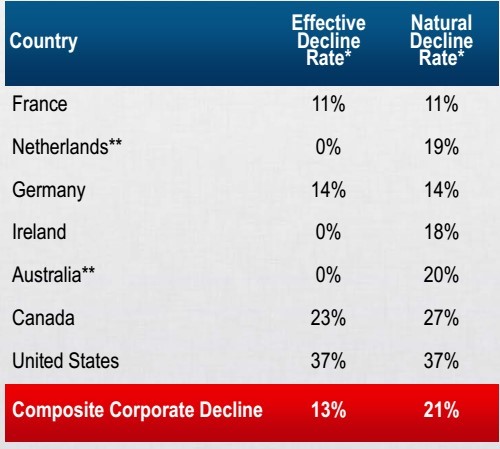 Vermilion’s balance sheet is good, but the company would like it to be a little better.  The effect of spending on development of Vermlion’s Corrib property with extremely low oil prices added some debt over the past few years.

I would expect to see the increased free cash initially go towards balance sheet improvement.  By the end of 2017 Vermilion’s debt to cash flow should be down to only 1.2 times.

At that point I think a dividend increase is likely in order, perhaps as much as a 25 percent increase.

This company already yields 4.7 percent and continues to grow production by 5 to 10 percent per year.   You would think that adding to that already sizable dividend should do good things for Vermilion’s share price.

With a solid balance sheet, nice yield, growing production and an upcoming dividend increase to act as a catalyst…..Vermilion shareholders should find themselves with a seat at a another really good 2017 show.

Not magic at all, just a really well positioned company.

EDITORS  NOTE:  I love energy companies–any company–that keeps increasing its dividend.  I found an energy producer that is so profitable–right here and now–that I expect its dividend to more than double in the next two years–and reduce debt at the same time.  Get this stock working for you NOW–click HERE