The world needs a lot more lithium mines, after Toyota said on October 29 that it has mastered the Lithium-Ion battery.

And that’s a problem for the fast growing Electric Vehicle (EV) market, because even though finding lithium is relatively easy, getting a mine into production is not.   Adding Toyota’s huge global demand to an already tight market…will make lithium investors very happy.

Toyota is one of (and often is) the largest car companies in the world, and certainly has the most hybrid/electric cars–in April 2016 they surpassed 9 million sold.

They are now focused on lithium for the next 9 million.  So if you think this is the most bullish chart in energy right now–and it is–you just wait.  I think we ain’t seen nothing yet: 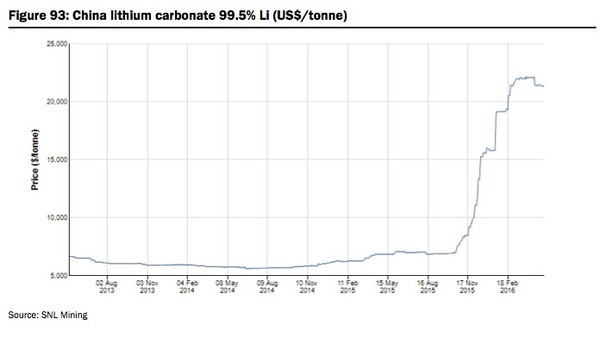 Lithium prices soared in the last year—more than quadrupling from $5,000 per metric tonne to a peak of $24,000/t.  This happened as the Market realized that lithium battery demand would ramp up huge in the next decade–and the market realized lithium supply could not keep up.

That kind of gain rarely holds and indeed lithium prices have cooled some since.

But the fundamentals remain very bullish.

That would mean EVs alone will need more lithium in 2025 than the entire market needs today.

One factor driving demand is that better technology is reducing lithium costs dramatically—six years ago lithium batteries cost $1,400 per kilowatt-hour (KWH); today they are less than $400 per KWH, a steep 70% decrease that is expected to continue.

By 2022 an unsubsidized EV will be cost competitive with a traditional internal combustion engine car. And it will be cool to own one.  What does this all mean in terms of demand?

Chris Berry is President of House Mountain Partners; an independent commodity analyst that services institutional clients, and a lithium expert. His estimates for needed new capacity are a bit lower but remain very bullish regardless: “We will need to bring one new lithium mine on-stream every year between now and 2025 to meet projected demand.” (Emphasis mine-KS)

One new mine a year!  Is that possible? Just like oil and gas, there is lots of lithium in the world – defined resources are enough to carry us for 460 years! – but lithium mines are notoriously difficult to build and operate.

Berry says lithium prices will remain strong because “demand will outpace supply ensuring a tight market and it is remarkably difficult to bring a new lithium mine on-stream.”

All those challenges mean only two of the 60-odd lithium projects around the world are expected to actually start producing this year or next and only another four have a chance of achieving production by 2020.

That leaves us with a very tight market. 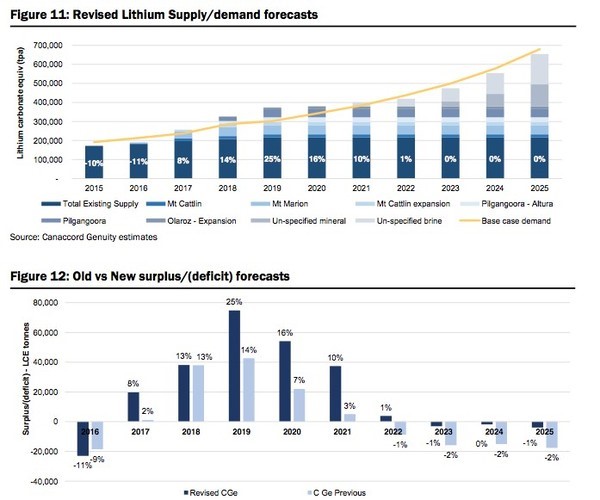 The yellow line shows base case demand. The bars show supply. You can see modest supply surpluses over the next few years and then supply has to push to keep up.

The dark blue bars show base case lithium surpluses or deficits while the light blue bars show a bull case market–big deficits in supply. Either way, one thing is clear: there is not a lot of room to give.

This is a market that needs a (much) stronger production pipeline.

And there is the opportunity: the market needs some lithium success stories, a few companies that can assemble the right people, projects, and capital to feed that production need.

The bull market in lithium is early days—the 2nd or 3rd inning—but already the Market has changed, says Berry.

The stock market winners have been the teams building a great property portfolio.  The next set of winners will be the teams who can develop the right properties quickly–then permit and build the mines.

That has me excited about a new lithium company—one with prime assets, an award-winning geologist and a board that has built and sold junior companies before.  Now they are focused on lithium and are raising millions of dollars very quickly.

What’s more, the biggest catalyst of its short life is happening within the next 30 days.

This company will be getting back their own very first drill results within 30 days—setting the stage for a potential re-rating by the Market.

In two days I’ll give you the name and symbol—for free.